For the next single that was in my box of vinyl, you get two for the price of one.  It is actually a re-issued single of two of Bryan Adams most popular songs from his ‘Cuts Like a Knife’ album.  A&M Records had a 45 single series called A&M Memories where they re-released singles of artists and both sides were previously released singles from the artist and from the same album.

The original singles “Straight From the Heart” and “Cuts Like a Knife” were actually released in 1983 as separate singles.  The B-Side for “Straight From the Heart” was “One Good Reason” and the B-Side for “Cuts Like a Knife” was “Lonely Nights”.  This release of those singles was done only a couple years later in 1985. The concept of this A&M series was pretty smart as it gave the customer two hit songs for the price of one.

“Straight From the Heart” was not originally recorded by Bryan Adams although he did write it along with Eric Kagna.  The song was recorded by three separate artists prior to his recording of the song.  It was first recorded by Ian Lloyd in 1980, then Jon English in 1981 and then by Rosetta Stone in 1982.  Bryan finally recorded and released the song in 1983.  And funny enough, that same year, Bonnie Tyler recorded the song for her album, ‘Faster then the Speed of Night’ in 1983. Bryan had to be making a little dough with all those versions going around.

Where “Straight From the Heart” was a ballad, “Cuts Like A Knife” was more of a rocker. It let the world know that Bryan had more to him than the love song and helped make me a fan of his music.  It was this song that turned me on to Bryan and 34 years later, I still listen to his music. The song reached #15 on the Billboard Hot 100 whilst the other single reached #10. The song was written by Bryan Adams and Jim Vallance. 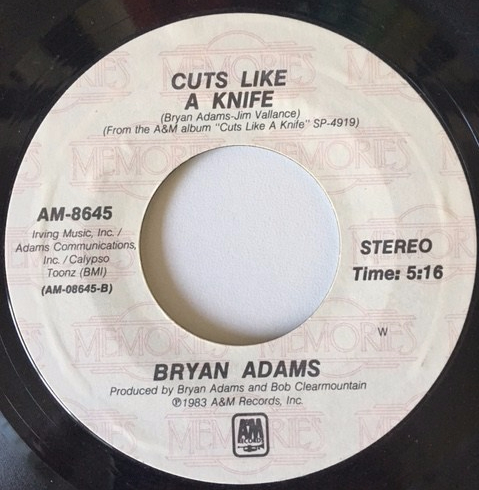 A cool story on the title of “Cuts Like a Knife”…

In an interview in 1988 with Vancouver’s Georgia Straight newspaper, Adams explained how Vallance and he came up with the title for the song:

“I think that I’m one of the world’s best mumblers, I can mumble some of the best lyrics, but putting them together is another story. I think that’s where Jim is really good — he can piece a story together. It’s just a good thing to have the tape rolling when you’re recording me. The best example was when we wrote “Cuts Like A Knife,” which was just literally a mumble. We looked at each other, rolled the tape back, and it sounded like “cuts like a knife,” so we started singing that.”

Adams and Vallance jammed on the chord progression for a while Adams sang “it cuts like a knife” over and over again. Vallance eventually responded with “but it feels so right.”  (thanks to Wikipedia for all the information).

I love the video for the song.  It was a simple concept of the band playing in a drained out pool and a girl changing into a bathing suit.  Bryan sitting on the side of the pool to start peeling an apple with what?  A knife of course.  The girl changes, then goes and climbs the steps and dives into the drained pool  The shot then shows the band playing in the drained out pool and the girl pulls herself up on the side of the pool all wet.  Very well done.

It is a nice single to have so I can enjoy both songs.  I hope you enjoyed them as well.

“Straight From The Heart”