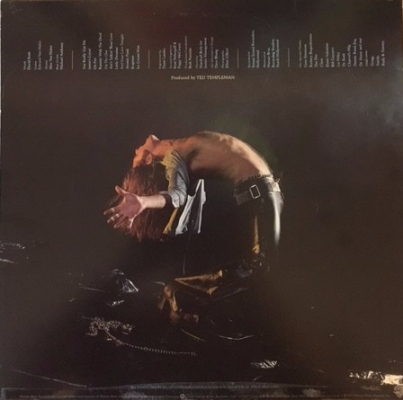 The debut album was actually recorded mostly live with some more studio work on a handful of songs.  It only took three weeks to record and cost only $40,000 to make.  That was easily earned back several times over.  While most bands were recording separately each instrument, Van Halen did it all at the same time which I feel gives it a rawness and was definitely not overproduced with overdubs and studio magic.  I think it actually adds some charm to the album.

Who are Van Halen?  Simple enough…

Michael & Alex are the rhythm section of the band and they keep everyone in line.  Eddie is the ultimate Guitar God that changed the world and how they viewed the guitar.  He introduced a new style and sound of playing and he has become one of the greatest guitar players to ever grace the rock scene.  David Lee Roth is the perfect frontman with his charisma and a style all his own. He is the ultimate showman.

The album sounds timeless and would work just as well if it was released today as it was when it was released back in 1978. One of my brothers had bought this album and it when I heard it, my life wasn’t the same afterwards.  I had been listening to Kiss and that was great and all, but when I heard this album I learned what rock music could ultimately become.  The guitar playing was like nothing I had ever heard and showed me there could be so much more.  I still have that vinyl copy today and that is where all the pictures are coming.

Alright, it is time for the music. 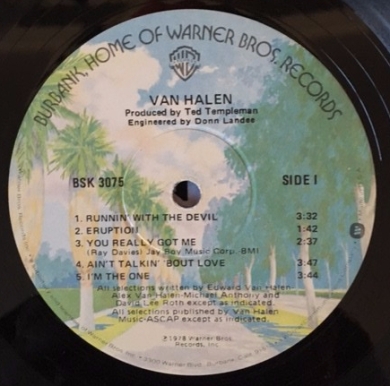 The opening track, “Runnin’ With the Devil”, starts off the album.  It is the album’s second single and only made it to #84 on the Hot 100.  The song opens with the sound of car horns that were actually taken from the band’s own cars.  I read that the horn idea came from Gene Simmons while recording their original demos.  The first musical note you hear is not Eddie Van Halen’s guitar, which is hard to believe, but you get a simple bass line by Michael Anthony.  After that the guitars come in and then Dave’s vocals and you immediately feel that this is something special.  A great opening rock song that gives you the trademark Dave squeals and an Eddie blistering guitar solo.

However, it is the second track that really made me fall in love with this band and Eddie’s guitar wizardry.  It was the instrumental track, “Eruption”.  It has to be one of the greatest guitar solos ever recorded.  It was this song that made the two handed “tapping” on the guitar famous. “Tapping” is where you take both hands up to the neck of the guitar and tap on the strings rather than use one hand while strumming with the other.  At the time, this was very innovating and Eddie led the charge.  The tile of the song fits so well with what you hear as the playing it so fast and furious it is has the intensity of a volcano erupting.

“Eruption” leads directly in to one of the best covers I have ever heard of the Kink’s song “You Really Got Me”.  The song was the band’s first single and was a very updated version of the original song thanks to Eddie’s guitar playing.  “You Really Got Me” seamlessly follows “Eruption” as like the two songs were made for each other.  Van Halen turned a classic song into a what seemed like an original song for the band and made it a classic again.

An interesting story I read about Van Halen’s cover is that Eddie had been playing the demo to the drummer of the band Angel and both were bragging about their new material.  Angel went into the studio to record their own version of this song.  Ted Templeman found out and rushed Van Halen to complete the song and released it quickly as the single to the album so they would beat Angel to the punch.  And who is Angel now?  Don’t know if I have heard of them since. (thanks to Tolinsky, Brad (2010). Guitar World Presents Van Halen. Backbeat Books. ISBN 978-0879309695)

“Ain’t Talkin’ ‘Bout Love” was the third and final single from the album which I find funny they only had three singles because there are so many well known songs from this album.  This was one of the songs that was overdubbed in the studio.  The guitar solo was overdubbed with an electric sitar which is cool.  The song was supposed to be a parody of punk rock, but turned out to be a straight up rock song.  This is actually one song that Sammy did like to sing during his time with band.

The final track on Side I is “I’m the One”.  The thing I like about this song is that it has the same double kick drum sound that they used for “Hot for Teacher”.  Of course the time I didn’t know that,  just loved the speedy drum sound.  Another think I like about the song is the “Bop bada, shoobe doo wahs” throughout the end of the song.  The first side of the album is rock gold and never slows down. 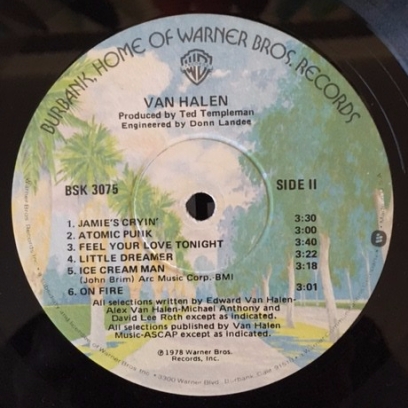 “Jamie’s Cryin'” is the opening track of Side II.  The song was about a woman who had a one night stand and ended up regretting that decision.  Which I am sure there were many women that had them with Dave and ended up regretting them.  Maybe he got a letter from one of them telling him just that and that is where the song came from.  It is the first slower song on the album and not as bombastic as the front, but is just as effective and actually a fan favorite.

One of the coolest songs on the album is “Atomic Punk”.  The guitar sound Eddie had for this song was so different than any of the other songs of the album.  According to Guitar World, Eddie “rubbed his hands back and forth across the strings, while kicking in his MXR Phase 90 to produce the scratchy-sounding riff (whatever that means). The song also had no backing vocals which was quite unusual for them.  The sonic style of this song is completely different than the rest of the album which is also why I like it.  They change things up and still rock it out.  Is there anything they can’t do right on this album.

“Feel Your Love Tonight” is another classic sounding Van Halen songs.  It is immediately recognizable as VH tune and highlights the harmonies of the backing vocals proving Michael and Eddie sound great together.  It is everything you love about a Van Halen song.

They slow things down again with “Little Dreamer”.  The song really highlights Dave’s vocal abilities.  He is more soulful.  Eddie and the band give Dave a nice showcase with this track.  Dave is not as flamboyant and really shines.

The second cover on the album is a favorite of mine and a whole lot of people, “Ice Cream Man”.  The song was written by blues musician John Brim and you would never think it would work as a Van Halen song, but it so does.  Dave actually is playing the acoustic guitar while he is singing the first verse.  It is one of his favorites and a tribute to blues.  It is the most bluesy song on the album, but they do rock it out in the end.  Also, I don’t think they are really talking about Ice Cream!!!

The final song on the album is “On Fire”.  This song could easily be the most metal song on the album.  The song actually sounds almost like a real live song.  It definitely has more bite and bit edgier than the other tunes. It is actually a great song to end the album as it keeps you wanting more.

There you have another edition of The Debut.  I really do think this is one of the best debut albums I have ever heard.  It was one of those albums for me that was killer with no filler.  It changed the way guitar playing was done and changed the landscape of what hard rock should be for the next decade.  I think this album was the start of the rock movement that drove the 80’s and the guitar rock is something missing from today’s music.  Let me know what you think and what your favorite debut might be.  I hope you enjoyed and have a great week.