Before I get into the review, I want to note that I did not pay for this CD, it was sent to me.  However, it wasn’t sent by the band or even any PR team, but by the Mighty Mike Ladano as a gift because he thought I would like it (very cool of him…thanks Mike!).  He knows the band though so I guess he is their PR guy.  I hope he is getting paid.  Anyway, the review set forth is my honest take on the album.

Max the Axe is a Canadian band out of Kitchener, Ontario (yeah, I don’t know where that is either).  The songs are filled with some gritty, distorted guitars and the lyrics at times have a slight comedic flare which makes me think that this band is the bastard child of Black Sabbath and Barenaked Ladies.

When the band shined was when they were completely in beast mode with the songs “River Grand” and “Scales of Justice”.  The guitar work was outstanding with the distortion and the drum fills were great.  “Scales of Justice” was an epic song at over 6 minutes and some of the best riffs.  What might be my favorite song off the album is “Sick of Living”. The band  slays it in what I thought sounded like a mix of Sabbath and Priest.  The guitar solo was one of the best on the album and that scream was so rock & roll. 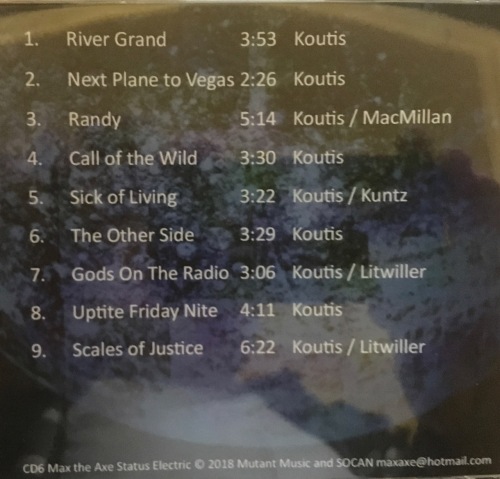 The band also killed it when they had a little fun.  “Next Plane to Vegas” threw out every Vegas cliche in the book and then some, but still kept it fresh and enjoyable.  “Randy” was the strangest song on the album and I hated it at first, but it grew on me as the chorus gets stuck in your head and is now such a good time. Randy roll that reefer!!  My second favorite song on the album is “Gods on the Radio”. The lyrics are so clever and how many songs mention Scott Baio?  Not enough I can tell you.  The song is pure adrenaline fun and it sounds like the band is having a blast…I know I was.

Now at times the band comes across a little rough kinda like a garage band (“Uptite Friday Nite”), but you know what, that is actually the charm of this band.  They sound like your friends playing some killer songs and everyone is drinking and having the time of their lives.  After listening, I wanted to be their friend.  The only songs that didn’t really work for me were “Call of the Wild” and “The Other Side”.  Outside of that, it was all killer.

As far as the track listing goes, I score the album an 7 keepers out of 9 songs for an  78%.  Now, for the overall album score, I have to say I really enjoyed this one.  Too bad I got it so late in 2018 as it didn’t make my deadline for my Top Rock Albums of 2018, it would have made it somewhere on that list.  The guys really can play and I loved the guitar work and the fun with the lyrics. As a result, I am scoring the overall album a 4 out of 5 Stars!!  Great work guys, when are you touring the States???

If you want the album, I put a link to their facebook page so you can reach out to the band and pick up a copy.  Thanks – MAX THE AXE FACEBOOK