Recently, I looked up the definition of the word “fun” in the Oxturd Dictionary and it told me the definition was “to be Defiant”.  I thought that sounded about right.  So, how could I be defiant.  Well, the quickest and easiest way was to pick up the latest release by the band The Defiants.  I figured that fit the bill of “fun” quite nicely.

And I was right!

The band consists of three members all stemming from the band Danger Danger.  They are Bruno Ravel on bass, Rob Marcello on guitar and Paul Laine on vocals.  And to make the Danger Danger connection even stronger, drummer Steve West filled in on the kit for this recording.  Since Danger Danger still exists with lead singer Ted Poley, they couldn’t use that name so they came up with their own. 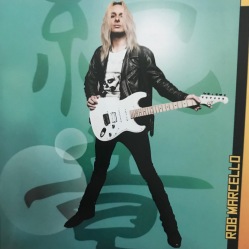 ‘Zokusho’ is the band’s second album and the word actually means “sequel” or “next chapter” in Japanese which is actually what this record is.  The band picks up right where they left off on their debut.  If you liked 80’s rock and the whole melodic rock scene, let me tell you that it doesn’t get much better than this.

“Love is the Killer” opens the set in the same vein as “Love and Bullets” did on the debut.  It is bombastic and it sets the tone nicely of what is to come.  What is great about this song and the whole album for that matter is all the amazing and blistering guitar solos that are laid down by Rob Marcello.  He outdoes himself on this one.  The band completely stepped it up a notch from the last album.

If you liked that song, you don’t have to wait long for one even better which is “Standing on the Edge”.  It is another rocker that makes me feel like the 80’s are still alive and well. “Hollywood in Headlights” keeps the fun going with a great song about a Summer love that ended too soon.

One of the best songs on the album is up next with “Fallin’ For You”.  With a little keyboard opening and then a gritty guitar riff, we get a classic Danger Danger style rocking love song.  “Hold on Tonight” slows things down a slight bit giving something Paul does so well and that is deliver a heartfelt ballad.

Then it is time to crank it up and party hard as The Defiants crank it with “Allnighter” which is about what you think…drinking and partying all night!  This could be a great one live.  Next up is another of the best songs on the album, “U X’d My Heart”.  It starts out with just a guitar and seems like another ballad, but you’d be wrong.  Paul’s vocals are stellar and he and Bruno have written another classic.

“It Goes Fast” and “Stay” are more of the same and who’s complaining. They might not be as dynamic as the earlier songs, but they still hold your attention and keep the fun going.  It is “Alive” that really shines and actually changes it up a little.  The guitar has the “Where the Streets Have No Name” vibe of U2, but the song is still drenched in 80’s rock.  Not quite ballad, not quite rocker. 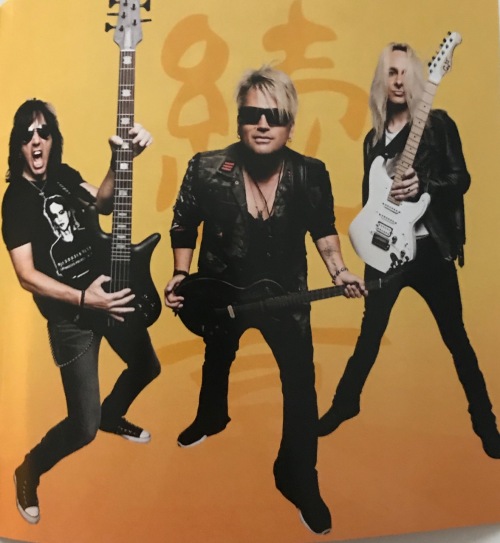 And let’s end on a “high” note.  And that “high” note is from drinking with the song “Drink Up!”.  It is a pure and simple a drinking song and rocks you out.  It is full of every drinking cliche there is and you know what? I think I will have another shot of this and start the album over!

The track score is a 10 out 11 for a score of 91%.  It was almost perfect except for the two 1/2 point ones that were good, but different offer anything different.  The essential tracks are “Standing on the Edge”, “Fallin’ For You”, “U X’d My Heart” and “Alive”.  But really you can’t go wrong with any of it.

We have all the 80’s themes on this album, falling in love, losing love and drinking & partying, all wrapped nicely in a package that is nothing but a good time.  So was the Oxturd Dictionary correct on the definition of “fun”?  Yes, The Defiants take you back to an era of music that was all about fun.  They stepped it up and gave us an even better album than their debut.  If you like Danger Danger and any of the 80’s rock, then this one is right up your alley.  Grab a copy and be ready to be transported to the big hair, the big sounds and the big fun.  I will rate the album a 4.0 out of 5.0 Stars.

If you want to check out the review of the debut, click on The Defiants!

Now, I am going to live with the CD for a little while longer and then I will update the Paul Laine – The Albums Ranked Worst to First Post to see where it will land on the list.