After ‘Whitesnake’, David went in a recorded his follow-up solo release, ‘Northwinds’.  This was around March / April of 1977; however, the album wouldn’t be released until a year later in March of 1978. I am not sure why the long delay in release, but the bad news for the release was by the time it did come out, Coverdale was done as a solo artist.  He had already pieced a band together that would go on to become WHITESNAKE!  I will save that for the next release which came out in June of 1978 just 3 months later.

The album did a little better than the debut and sound wise is more of the same. Okay, maybe the production is a little better and the sound starts to get some of the Whitesnake sounds, but not entirely.  David is still finding himself with this record which doesn’t mean its bad, it is far from that.  It is an interesting look at early David, pre-Whitesnake, and a glimpse into his musical tastes.

I have this on vinyl and it is part of a 2LP set including both David’s early solo albums, ‘Whitesnake’ and ‘Northwinds’.  It is a sweet set released in 1988 at the height of the band Whitesnake and they were trying to capitalize on Coverdale’s popularity.  I like having this set as these two albums really should be played together to get the full impact of his early songs and to see a young Coverdale growing into a fantastic songwriter. 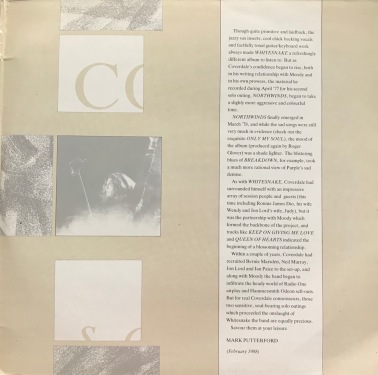 The album only had 8 tracks all penned by David with the help of guitarist Micky Moody who helped on 3 tracks.  It was still the beginning of a fruitful relationship.  The songs are as follows:

I guess we should get to the music.

I know it says side 3, but it is really side 1 of this album.  The album opens up with a funkalicious guitar riff by Moody that could have come from Glenn Hughes playbook.  “Keep on Giving Me Love” has a great groove and is a rocking opening track and excites me as what is to come.  Coverdale’s vocals have an edginess to it and Moody rips through a nice solo.  Interestingly enough, the original release of the album has this as the 2nd track, but all releases after the original flipped tracks 1 & 2.

“Northwinds” has David on piano giving a soulful vocal performance.  The song starts off slow and builds to almost a church-like feel.  This one is a highlight for the maturity of it and the vocal performance of David.  Beautiful track.

Next up is “Give Me Kindness” and well, not my favorite track.  You have David now on the electric piano and it is a happy up-beat song.  There is a horn section that gives it a slightly jazz feel to it  and then it goes a little churchy at the end with the gospel feel to it.  There is one really cool fact about the song…the backing vocals are by Ronnie James Dio and Wendy Dio.  I told you it was cool fact.  I am little torn on do I like this one or not, I lean more to not, but it has its moments.

The final track on Side One is “Time and Again”.  David slows things down and I swear he is going all Barry Manilow on this one.  Heck it is the 70’s.  There are a lot of synthesizers on this one too so yikes.  Sorry David, I think I would like Manilow singing this one better.

This side kicks off with “Queen of Hearts” which is full of pianos and there is a nice bass thump before the song slams into gear and really gets going.  A groovy and bluesy song that becomes a banging good time.  This is the second Coverdale-Moody track and in fact all 3 songs penned by the two are the best and most rocking tracks on the album.  A good sign of what was to come from these two.

“Only My Soul” is a fantastic rock ballad with a great soulful feel to it in the guitars playing.  This has Whitesnake all over it.  Alan Spenner, on bass, lays down a nice groove with the keyboards playing along with it during the musical interlude before David comes back and brings it home.

“Say You Love Me” is another piano song (there have been quite a lot…more than I remembered).  What you think is just another ballad becomes this grandiose experience with sax playing by Ron Aspery and Micky’s guitar work saving the day at the end.

The final track is the most rocking song, “Breakdown”.  It is pure Whitesnake.  Moody & Coverdale hit it out of the park with this one and they rock it out like nothing else. The song is actually written about the downfall of Deep Purple.  The energy and enjoyment this song brings is the most satisfying for me on this album and makes me so excited to finally be getting to Whitesnake with next review.  A great ending to a really special album.

The Track score is 6 out 8 or 75% which is a pretty decent score.  The songs are a definite step up from the debut ‘Whitesnake’ and only a few misfires.  As a result, I will give the overall score on the album a 3.75 out of 5 Stars.  I found the album a major step in the right direction and a quite enjoyable listen.  Some of the album sounds a little dated, but the production was much improved.  David Coverdale’s song writing has improved and even more so when you throw Micky Moody in to the mix.  If you are a Whitesnake fan, then you need to grab this release, it will  be worth it for you.  And now I can’t wait to dive in to the Whitesnake albums.

Thanks for stopping by.  Let me know what you think and I hope you come back again for the next one in the series.