Back in April 2019, I was traveling in Paris with my family and I got a few minutes to visit some record stores.  While in one, I found a 12″ Single for the song “Give Me More Time” by Whitesnake.  And it turns out the version was the UK release.  So I had to go to France from the US to get a UK single.  Makes sense.

The single was the second single from the album and was released on January 3rd, 1984.  It reached #29 on the UK Charts and was never released as a single in the US.  And the fact that this is the UK Single it also the UK Mix which sounds different than the US mix.

The UK Mix has a little heavier guitar sound to open the song and all the instruments have a little more punch.  The US version, David is more front and center.  It is a fun, melodic song and David sounds great.  It has that 80’s rock sound and a classic Whitesnake swagger.

The B-Side of the album is “Need Your Love So Bad” which is a non-album track and a cover of Little Willie John’s 1955 song written by Mertis John Jr. who is the big brother of Little Willie John.  The song has this whole church vibe with Jon Lord’s organ playing.  David comes in very soulfully and sings with such emotion. It opens with such a slow tempo.  The organ get louder as the song builds in intensity and David croons along with it and then slows back down and it is a beautiful performance and so cool the B-Side is a bonus track not on the album.  This is the highlight of this 12″ Single.  A cool find for me. 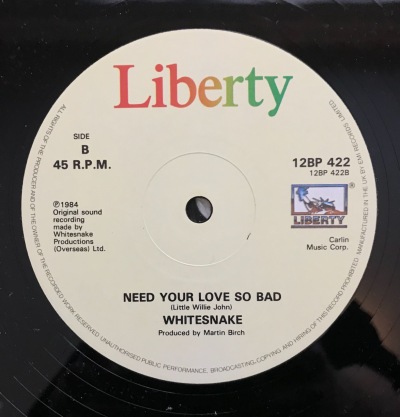 And there you have it.  A little bonus review for the David Coverdale Series. Oh what the heck, let’s do another bonus edition…

Up next…Bonus Edition – Whitesnake – ‘The Best of Whitesnake’.