After the final Whitesnake Tour back in 1998, David felt lost.  He had been David Coverdale of Whitesnake for so long, he wasn’t sure who he was anymore. He needed to find himself.  After a little break, David Coverdale re-emerged, but this time without the Whitesnake persona.  This time, he was just David Coverdale.  Even though his previous album, ‘Restless Heart’, was supposed to be a solo album, this is now officially his first one since 1978’s ‘Northwind’…and no, Coverdale/Page doesn’t count as a solo album. 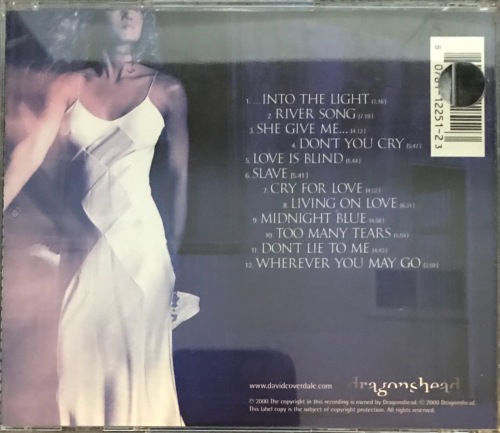 The cool thing about the solo album is that it really is just David and a lot of great, talented musicians pitching in on songs.  You get Doug Bossi, Earl Slick, Marco Mendozza, Tony Franklin and Denny Carmassi, just to name a few, but that is only the tip of the iceberg.  With all these different artist, you don’t get that typical Whitesnake sound.  But you do get hints.  There are some blues tracks, there are some Zeppelin style fare and there is stuff that is truly only David.

The album came out on September 25, 2000 in the UK and it was released with little fanfare. It didn’t blow up the charts or set the world on fire. Heck, it was pretty much non-existent in the States. I accidentally stumbled across back then, but I did add it to my collection.  What it did do was get David back in the music business and working again, if at least for a brief time.

The album opens with a short instrumental called “Into the Light”.  It has David on guitar and feels like a new beginning or like David is starting fresh and saying this is me.  Then the song kicks in to a very blues heavy track called “River Song” which harkens back to the early Whitesnake and Deep Purple sound.  David is a big blues man, so a song with this sound is no surprise.  I believe Earl Slick and Doug Bossi are trading guitar licks on this one.  Some really cool riffs and Bossi on the slide guitar and it even has two guitar solo moments.   It is great opening track and quite surprising pretty long at over 7 minutes.  David sounds great and is in fine form.  There is a more mature feel to his vocals and a control that I don’t if he had when he was younger.

Then next up is “She Give Me” which could be an outtake from ‘Coverdale/Page’.  It is as if “Pride & Joy” and “Shake My Tree” got married and had a baby. The guitar solo is brilliant and handled by Reeves Gabrels (The Cure & Tin Machine) and then you have John X. Volaitis on keyboards.  The song totally kicks ass and makes me want another Coverdale/Page album…please!!  David even uses the same effects on his vocals he did for that album.  It is a rambunctious, rocking good time.

Next up we go straight in to a ballad, “Don’t You Cry”, which I think is too early.  I will tell you now this is my least favorite track on the album.  It is a little too much, it tries to hard and it feels wrong.  This one has Dylan Vaughan on guitar, Tony Franklin on bass, John X on keyboards and background vocals and Bjorn Thorsrud on tambourine.  David sounds like he is trying too hard to be emotive and the whole thing doesn’t work for me. A throwaway song for sure.

Then we go straight into another ballad and I thought, woah, you can’t do that.  But he is David Coverdale, he can and he does and this one works.  “Love Is Blind” was the first single and didn’t chart, but it is a shame.  It opens with David singing to an acoustic guitar (ok, he isn’t singing to the guitar, you know what I mean).  You have James Sitterly on the strings with a full arrangement by Ruy Folguera which brings it a heavenly, beautiful feel.  It adds a lot to the ambience of the song. I think it is one of the better ballads David has written with the help of Mr. Earl Slick (who co-writes almost every other song on the album from here on out).

Then we get the rock back on with “Slave” which was the second and final single on the album.  It did make it to #33 on the US Billboard Mainstream Rock tracks.  You get Doug and Earl back on the dual guitars blasting out riffs and a much needed heavy solo.  David sings and speaks a little on the slow part of the opening and then it kicks in to full gear.  It harkens back to the late 80’s version of Whitesnake and why it ranks high on my likability factor.  It is David being David, full of cockiness and swagger.  And Denny Carmassi is killing it on the drums with this one too so I don’t want to leave him out.

“Cry for Love” opens with a harmonica by Jimmy Z and this blues track rocks out as well.  They jump right in and lay down a great groove and they feel like they are letting loose and having a good time.  David even joins in on guitar.  There isn’t much to it, but it is pure fun and you will enjoy it as much as the band is.  Okay, there is a lot of great guitar work and that is alright by me.

Next up is “Living on Love” is a cool acoustic number and David delivers a soulful song and the guitar playing has such a Page feel to it and also feels like it could’ve been left over from the Coverdale/Page album. A couple minutes in, the song kicks in to gear and rocks out a little more adding Carmassi’s drums and some electric guitars and Derek Hilland on keyboards.  It goes back and forth between power and acoustic and is a decent enough track that you should enjoy it.  My only complaint is it is a little too long at over 6 minutes, but the guitar playing in the last couple minutes makes up for it. 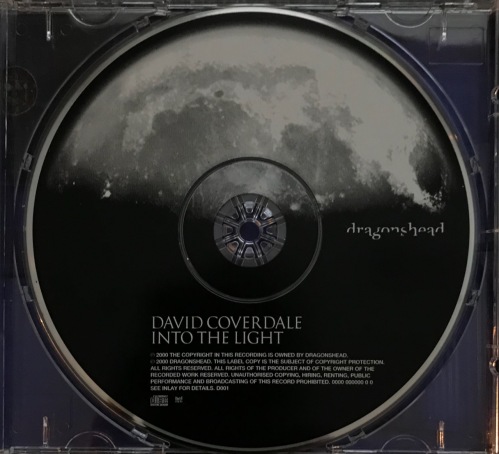 “Midnight Blue” kicks off the final four songs.  It is another ballad with a slow intro which has David singing softly accompanied by a piano.  It is a power ballad so it has the build up and gets heavier at times, but always goes back to the slower, piano based sound for the verses.  It is really only an average track and I could do without it as it isn’t setting any new ground.

Now we get a re-recorded version of “Too Many Tears” written with Adrian Vandenberg from the ‘Restless Heart’ album.  A strange choice, but it fits in nicely with this set.  The differences are subtle, but noticeable.  This is more acoustic driven with almost a slight country twang to it at times and less bluesy than the original.  I have to say I like this version a lot.  Again, it fits with this album and is even 15 seconds longer than the original and I’m okay with that.

It is time to turn the volume back up with “Don’t Lie To Me”. This track attacks you with all it’s might.  It is guitar heavy and Earl tears it up.  Carmassi’s lays down a quick beat and keeps the tempo constantly moving at a fast pace.  It is a classic 80’s Whitesnake sound and after a couple slower songs, the boost is needed and wanted.

The final track is another ballad as David loves his ballads.  This one though is on a different level then the rest and might be my favorite on the whole album and a lot of his albums.  The song is “Wherever You May Go” and it is an extremely beautiful acoustic track. David is accompanied by the angelic vocals of Linda Rowberry who has worked with Billy Corgan of Smashing Pumpkins.  David delivers one his most heartfelt and stunningly glorious vocal performances. The song will tug at the heart strings  This song is all Coverdale with no assistance from anyone on the writing.  The Spanish guitar is none other than Marco Mendozza and then you have John X on the harp.  Truly brilliant!!

The track score will be based on 11 tracks as I don’t count intros or interludes.  So, we get a score of 9 out of 11 tracks for an 82%.  The album was ballad heavy and it was two of the ballads I didn’t like, kick those off and then 10 tracks with the intro and you have a damn near perfect album.  I have to say that I forgot how good this album is.  I liked it back in the day, but hearing it again after bumping it up against his entire catalog and this is pretty freaking an awesome.  I am going to give this a 4.5 out of 5.0 Stars.  I really got in to this and loved how David’s voice has matured and how controlled he was on his vocal delivery.  It was a new David, a fresh David, a true singer with this one.  Do yourself a favor and check this one out.