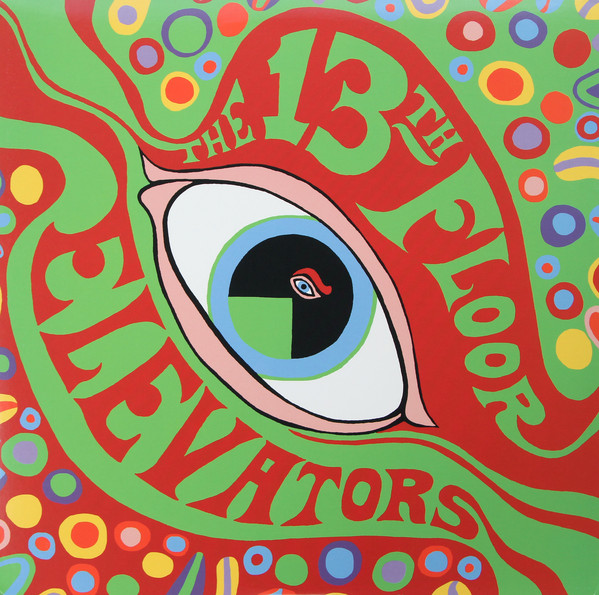 Thanks to all for participating.  The November choices will be up on Saturday!

I put this album up for selection as I’ve seen so many people say how much they love it and the band popped up in the ZZ Top Documentary so I figured it was time I gave it a listen…if it won. And it did, obviously or this discussion wouldn’t be happening. First I needed to know who the The 13th Floor Elevators were. They were a psychedlic, garage, acid rock band from around 1966-1969 basically and consisted of the following members…

The album came out in 1966 and is believed to be the first album to ever mention the term psychedelic in a musical sense and when you listen to this album there is no doubt that the word fits perfectly. The album screams psych/60’s rock and that whole hippie movement except with more edge as the album does rock out at the same time.

The album is also been touted as being one of the 1001 albums you must hear before you die and I’m not sure I agree with that statement. I didn’t really connect with this album much at all. It was a strain to get through it (and I’ve listened to it at least a dozen times hoping to connect. My biggest problem with is this one sound that is repeated on most of the songs. It was a high pitched dody-dody-dody type sound from a guitar I think. I found that noise to be distracting and actually quite grating like nails on a chalk board grating. If I could find someone that could pull that instrument out of the mix, then I think this is a really great album.

The opening track, “You’re Gonna Miss Me”, is a great rock track about a girl that had done him wrong. And then it goes in to the James Bond style song “Roller Coaster” which I swear could’ve been the opening song for one of the Bond movies. And then the first misstep was “Splash 1” which was a slow-tempo ballad that left me sad and really took away from the energy of the first two tracks. Luckily that didn’t last long as “Reverberation” brought the energy back and delivered another solid rock song. The last song on Side 1 was “Don’t Fall Down” and was a mid-tempo track that wasn’t bad, it just didn’t really go anywhere.

Side 2 kicks off with “Fire Engine” with a cool siren sound and the band exploded into a major trip. Another great rocking track and one of the better ones on the album. Next up was “Thru the Rhythm” which had some interesting moments and then “You Don’t Know” the same but both had some of that irritating noise in it and it really detracted from the songs. “Kingdom of Heaven” starts off dark and heavy on the bass and felt like a bad trip which was actually quite great. “Monkey Island” lays down a solid groove and then the album ends with “Tried to Hide” a classic psych sounding song and lot of that irritating sound which is a shame as the song added a harmonica and had some cool moments.

I really struggled with this one and it left me unable to really describe it. I like good pysch rock and this could’ve been it, but that sound in most of the song distracted me so much and got on my last nerve which almost made this unlistenable for me. I don’t see myself picking this up ever again sadly. But it is okay, I’m not meant to like everything and I seriously think this would be a great album without that noise so someone strip it out and send me the new mix and I will review it again. Otherwise, I can only give it a 2.0 out of 5.0 Stars and I know it is so much better than that score. It was sadly, lost on me.

You can’t win them all. Novembers choices will be up on a Saturday.