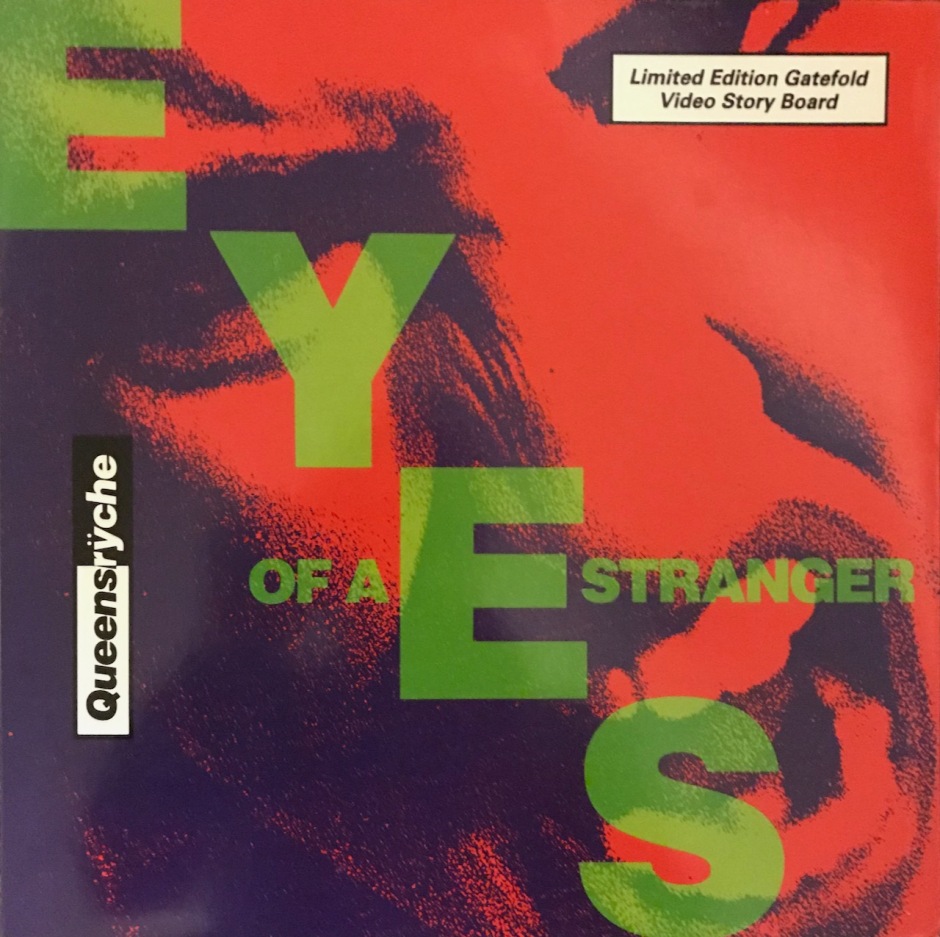 When I hit up Noble Records for the big metal collection he was selling, it wasn’t all Def Leppard Singles I purchased. There was a Queensryche in there as well and it was a single from my favorite album ‘Operation: Mindcrime’. The single was for the song “Eyes of A Stranger” which was only moderately successful as it only reached #35 on the US Mainstream Rock chart. It was played on MTV, but for me it was played constantly as that album was on repeat for most of 1988 and has been played every year (multiple times a year) ever since.

For those that don’t know, ‘Operation: Mindcrime’ was a concept album and this song, “Eyes of a Stranger” was the final track on the album and a culmination of the whole album story. This 12″ Single is a Limited Edition Gatefold that contains a Video Story Board of the video shot for the song. The gatefold has pictures from the video and sums up the story as seen below.

Just in case you can’t read it off the picture, here is what the album is saying:

“Eyes of a Stranger” is very much the culmination of the ‘Operation Mindcrime” story and as such this video will show, in flashback, the many facets of the whole story. Set in Contemporary times it features an unmotivated, lifeless junkie Nikki. We’re also introduced to Doctor x (picture 5), a cool sinister man who thinks he can control the world through violent means. Sister Mary (picture 8), a former prostitute is also recruited by X to be Nikki’s helper. Nikki is used by X as a hit-man to assassinate powerful political and religious leaders.

“Eyes of a Stranger” begins with Nikki regaining consciousness from a coma (1), remembering all the horrific crimes he committed, his meetings with X (9) where he promises to join X’s revolutionary movement. As he continues his roller coaster memory ride, he sees himself and his crimes on a news bulletin (18) and turns to Mary for comfort hoping she will absolve his sins (21). Nikki and Mary have become more attached than the Doctor had planned, X orders Nikki to kill Mary. They both try to escape from X, but Nikki’s drug addiction brings him back to the Doctor. Nikki pleads with X to stop the killing but X just laughs. Nikki returns to the church to see Sister Mary and finds her dead – hanging by her own rosary (17). Betrayed and hurt Nikki runs away screaming into the streets where he is arrested along with Doctor X. In the last scene Nikki is left sitting in an empty room tracing Mary’s figure on the wall (24). All this action is intercut with a powerful performance from the band. “It’s like when you die” says Chris De Garmo, “your whole life flashing before you. The whole thing comes round in a giant circle. What happens to X? X seems to escape doesn’t he? or can we believe Nikki’s story?”

I would say that summed it up nicely in a long, drawn out sort of way. But as you can see, it is a heck of a story and they fact they pulled this off flawlessly in a concept album is incredible.

Now the single is an E.P. basically as it has four songs. I like what they did here and promoted every release they have had up to this point by picking one stellar track off each album. You get “Queen of the Reich of the debut E.P., “Take Hold of the Flame” from ‘The Warning’, “Walk in the Shadows” from ‘Rage for Order’ and of course, “Eyes of a Stranger” from ‘Operation: Mindcrime. Each track might actually be my favorite song off each album which is even better.

I really love this single and let me tell you it is in mint condition. I am excited to add this one to the collection and I can see myself actually pulling this out from time to time as I said, some of my favorite Queensryche tracks. And plus, I can never get enough of Chris DeGarmo on guitar and Geoff Tates soaring vocals. Thanks for stopping by and I hope you enjoyed a look at this Single.