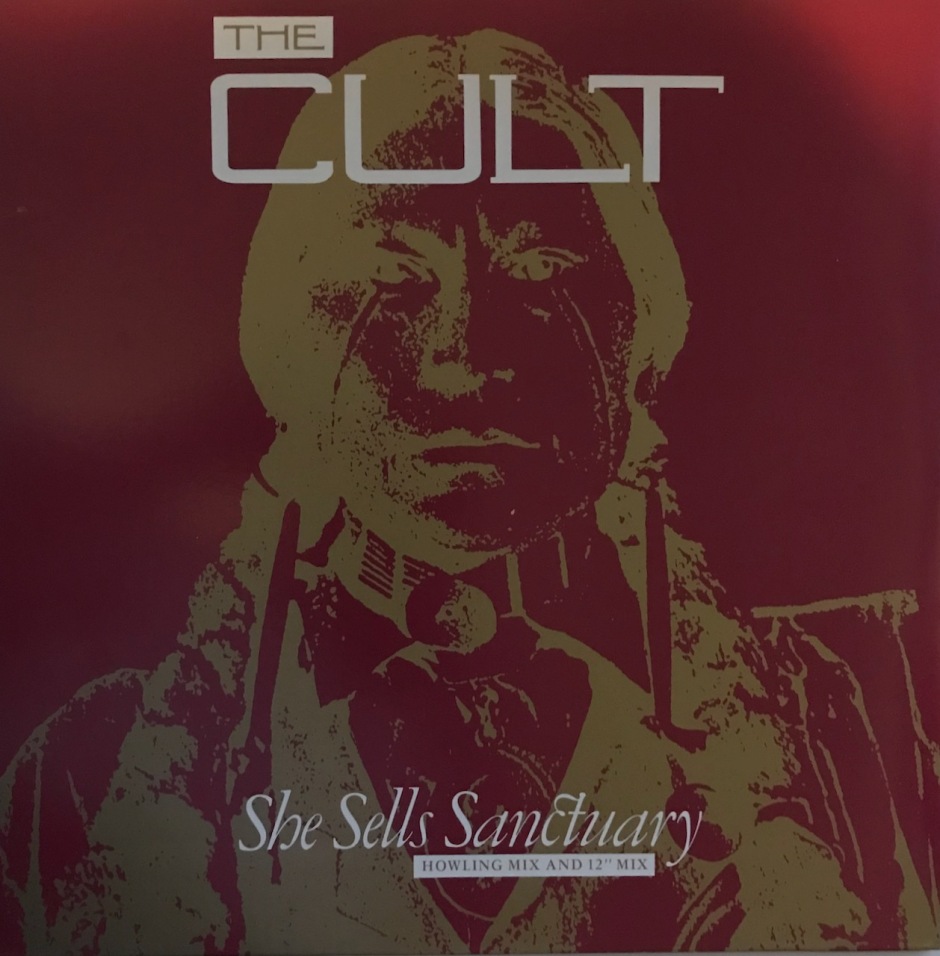 Continuing the saga of all the 12″ Singles I picked up at the big Metalocalypse sell at Noble Records, we are now on a 4 week run of singles from The Cult. First up is from the band’s album ‘Love’ from 1985. The song is “She Sells Sanctuary” and this is the 12″ Remix release. The original version of the song is not on here, nope. Instead you get two extended mixes of the song and one unreleased track.

All of these were only available on one of their 12″ Single releases which they had a couple. That was until 2009 when the band released a deluxe edition of the album which included all the mixes and unreleased tracks.

The original song did really well and stayed on the Dance Club Chart for about 6 weeks reaching #36 back in 1986. I never thought of The Cult as a dance band, but whatever floats your boat. My only complaint with this 12″ is the back cover. I’m old and my eyes aren’t that great anymore, but the font with songs is really light and very heard to read. I snapped a closer up shot so I can read it and you too…

Let’s get to the music…

As you can see, the sole song on side one is “She Sells Sanctuary (Howling Mix)” which is over 8 minutes long. The howling mix does just that. It has a howling dog at the beginning and several other times in the mix. There isn’t much in the way of vocals as it is mostly music done in more of a dance fashion than anything else. It was remixed by Steve Brown. The song is good if you like that sort of thing, but I’ll stick with Side 2 as that is where the greatness is for this disc.

Side 2 kicks off with the 12″ Mix of of “She Sells Sanctuary” and this one more closely resembles the original song. It has the vocals from Ian Astbury who sings with such confidence and a sound that is unique to him. He is easily recognizable. But it is that guitar work from Billy Duffy that shines on this song. Accompanied by that driving beat from Nigel Preston, which this was his last recording before he was fired, Billy’s gritty metallic guitar sound delivers a killer riff and some cool fills This is the version I’m more familiar with and the extended version just adds to its greatness.

The real gem at the time of this release is the final track which was the unreleased song called “Little Faces”. Ian’s vocals are so melodic and powerful, it has a smoothness to it that lifts the song to another level. Billy’s guitar work is sensational as usual and he lays down a nice solo. I found the song to be worthy of the album and no reason it needed to be left off as it is as good as anything else they have done. I love it when a B-Side track shines and this does brightly.

And there you have it. I hope you enjoyed the look at this little gem…well, a gem to me. Side Two is the winner of the best side as the extended long version of “She Sells Sanctuary” is just as good as the album version. But the real joy is the song “Long Faces” as that is worth price for just this song. My copy is practically mint and I don’t think was played much…that has since changed. We will be back next week with the next The Cult 12″ that we picked up. Thanks for stopping by.