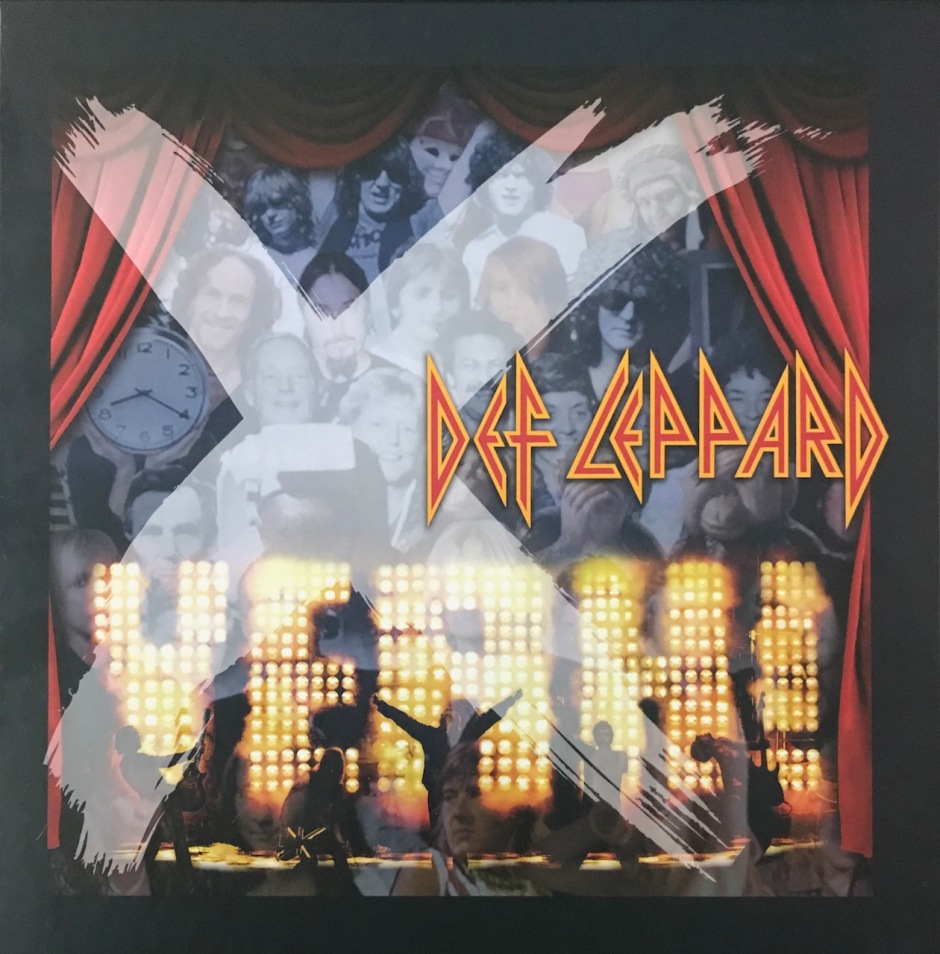 After a year since the release of The Collection Volume 1, Def Leppard released Volume 2.  It wasn’t until 2 years later that we finally received Volume 3. I believe the delay was due to the Covid-19 virus so I will forgive them for the delay. And as I did with the first two in the collection, I bought the Vinyl edition. And this was one was crucial to do that because these albums were not available on vinyl so it was even more of a must have buy. You can read those reviews here… click on The Collection Volume 1 and The Collection Volume 2.  As I normally do with these box sets, I focus mostly on the packaging and the bonus material as the main albums we all know and love or we wouldn’t be buying this set.  I want to know if we are getting a bang for our buck on the whole package.

Look at all the albums and songs you are getting. There are 3 Studio albums and 3 albums of bonus material and there a total of 9 LPs in the set as 3 of the albums are double LPs.  It is heavy and chock full of great tunes that will give you hours and hours of fun. I always save the sticker that is on the plastic wrapping and this time is no different.  Here is a summary of the box set.

The box it comes in is quite sturdy which it has to be to hold all those albums.  It is the built the same as Volume One and continues with the theme of blending all the album covers into one cover.  The back of the box has the albums shown and the track listing of all the albums which amounts to a whopping 77 songs.

Now as I said above, I am not reviewing studio albums as I am saving that for a later time. For now, we are going to just discuss them briefly.  The cool thing about this box set is that I actually have Zero of these albums on vinyl. Volume One I actually had all the studio albums already on vinyl and Volume Two I actually didn’t have any of them on vinyl either.  So like Volume 2, this set was a must have for my vinyl collection.

The first album in the set is the album ‘X’ which was released on July 30, 2002. The album is sometimes called “The Love Album” as the band was in more of a pop mood than rock and there were a lot of ballads on this thing. I personally love this album and found it to be a nice change of pace for the band who was much older and more laid back now. Two of my favorite tracks were “Scar” and “Torn to Shred”, but there is no denying the appeal of “Now”, “Long Long Way To Go” and “Four Letter Word”. The set here is all on one LP and not sure why they didn’t break it up on two as there 13 songs and a double might’ve made the sound a little better. But I’ll take what I can get.

The next album in the set is their 2006 Covers album called ‘Yeah!’. It was released on May 23, 2006 and was a collection of songs the band chose that were from their influences and their favorite bands. If you follow the band at all you know they love the 70’s glam scene so there is Bowie (“Drive-In Saturday), T-Rex (20th Century Boy” and Mott the Hoople (“The Golden Age of Rock & Roll”) as you’d expect. And then you get some interesting choices by Roxy Music (“Street Life”) and the Nerves (“Hanging On the Telephone”) even though they originally thought that was a Blondie song. I am not a huge fan of covers album, but I will admit there are some inspiring versions on here Badfingers’ “No Matter What” and The Kinks’ “Waterloo Sunset”. There is one song on here that I am so sick of the band playing live, but they love this one and that is David Essex’s “Rock On”. No matter what you think, there are some good choices here to listen to over and over again.

This time, the band split this in to two LPs and gave us a beautiful gatefold sleeve. Nice job on this one.

The bands next album of original material was the 2008 album ‘Songs from the Sparkle Lounge”. The album was released on April 25, 2008 and is one of my least favorite Leppard albums, but that doesn’t mean its all bad. The cool thing is the name of the album which is in reference to the backstage area they recorded in while on tour. It was dubbed the Sparkle Lounge. The band lost me a little when their first single was a duet with country singer Tim McGraw called “Nine Lives”. There were a bunch a songs I didn’t like, but a bunch I did and one of those is “Love” which is one of the best ballads they’ve done…ever. Some favorites include “Go”, “Only the Good Die Young”, “C’mon C’mon” and “Gotta Let It Go”. Again, not their best, but still worth having in the collection (like all their albums).

Now we are to the good stuff, the bonus material. This first disc here consists of all the Single Edits, the B-Sides and the rare songs from both ‘X’ and ‘Songs from the Sparkle Lounge’. The really cool songs to hear are “Kiss the Day”, “10 X Bigger Than Love” and “Gimme a Job” all non-album material. The other cool song to have is “Perfect Girl” which was only available on their website so this is the first time you can get on a physical release. The song is a Phil Collen demo which the band that was too soft and it wound up being “Gravity” on the album ‘X’. You do get some great acoustic versions of “Now” and “Long Long Way to Go” and then an amazing piano only version of the song “Love” which as I said earlier is fantastic and even better in this version. This is a big reason to buy the box set!!

Now here is a little gripe. This is a 2LP set and there are two things wrong. One, no gatefold as that would’ve been a sweet add. Two, no slick album sleeves with pictures. It is just basic white paper sleeve. A little more effort would’ve been great.

Another cool reason to buy this set is they created a Yeah! 2 just for this release. They gathered all the bonus songs from the original Yeah! release as well as all the covers they’ve done over the years including one we hadn’t heard before. There are roughly 10 songs that were B-Sides on various album singles over the years, you get about 8 songs that were Bonus material on different releases over different formats and countries for ‘Yeah!’ and then you do get one previously unreleased track from Phil Collen with him doing The Police song “Roxanne” and I will say that it is pretty great. You get a lot more Bowie including “Ziggy Stardust”, “Rebel Rebel” and “Space Oddity” to name a few. A couple favorite covers on here are “Winter Song” by Lindisfarne and “When I’m Dead And Gone by McGuinness Flint two artist I hadn’t heard of before. A couple of great songs to have are from the Adrenalize album where the jammed with The Hothouse Flowers and covered “You Can’t Always Get What You Want” and “Little Wings”…two must have songs if you don’t already have them…I did of course.

On packaging, they did this one right. It is another gatefold at least even though they did skimp on the sleeves as they are only black paper. At least we got the gatefold this time.

For the last LP, we got a few more covers, but this time they are all Live versions. There were 2 more bonus edition releases of Yeah! Dang they had a ton of bonus songs from the various region releases of that album. We got a couple previously unreleased tracks the first being “Travelin’ Band” which has Brian May and then we geot “20th Century Boy” Live from the VH-1 Rock Hones that had not been released. which had Brian May. They actually have 3 songs with Brian May and they labeled that side of the album “The Brian May Side Sort of”. I didn’t have the VH-1 Honors song or the song from Once Bitten Twice Shy event with Ian Hunter as they covered “All The Young Dudes”. It was cool to finally have that track.

The packaging was great on this one as the album sleeve was a cardboard sleeve with pictures so nicely done for them. This is only one LP as there are only 8 songs on this one.

And that isn’t all…

You also get a 40-page book filled with pictures from Ross Haflin and essays on each album from Paul Elliott. The essays are great as they give you great background on each album as well as each bonus disc. You get comments from the band and great little nuggets of information. The Ross pictures are astounding as usual as he is one of the best photographers in the rock universe. Now, I am not going to show you every picture as that would be cheating, plus I might get in to trouble. However, I am putting in an example of what you get so you have an idea what you are getting if you decide to buy this set and do that!!

And there you have it.  Volume Three of a Four Volume Set.  I can’t wait for the next release.  As far as this one goes, it is sweet and it has it all.  I know we didn’t get a live show from this era which is really disappointing and I would’ve liked to had one..  I am sucker for the band and I will take it any way they deliver it.  Def Leppard does do packages well and this is no different.  It really is a sweet set and for me, entirely worth every penny I spent.  If you got one, let me know what you think.  If you haven’t, that is okay, but you do need to remedy that.

I know I didn’t review the songs, but understand that there is so much here it would take so long to do at all at once.  I will hit them all eventually in individual posts, just not here.  I wanted you to see what you get for your money because if you buy this, you are already a fan and know the songs.  Thanks for hanging around for so long and putting up with all these pictures. I wanted to detail out what you get so I hope you thought it was worth the time.  And here is a little something extra.

We are two sets in and it is a great collection…

And yes, I know the bottom of Volume 1 is messed up but that is what happens when you drop it by accident…dang it!!