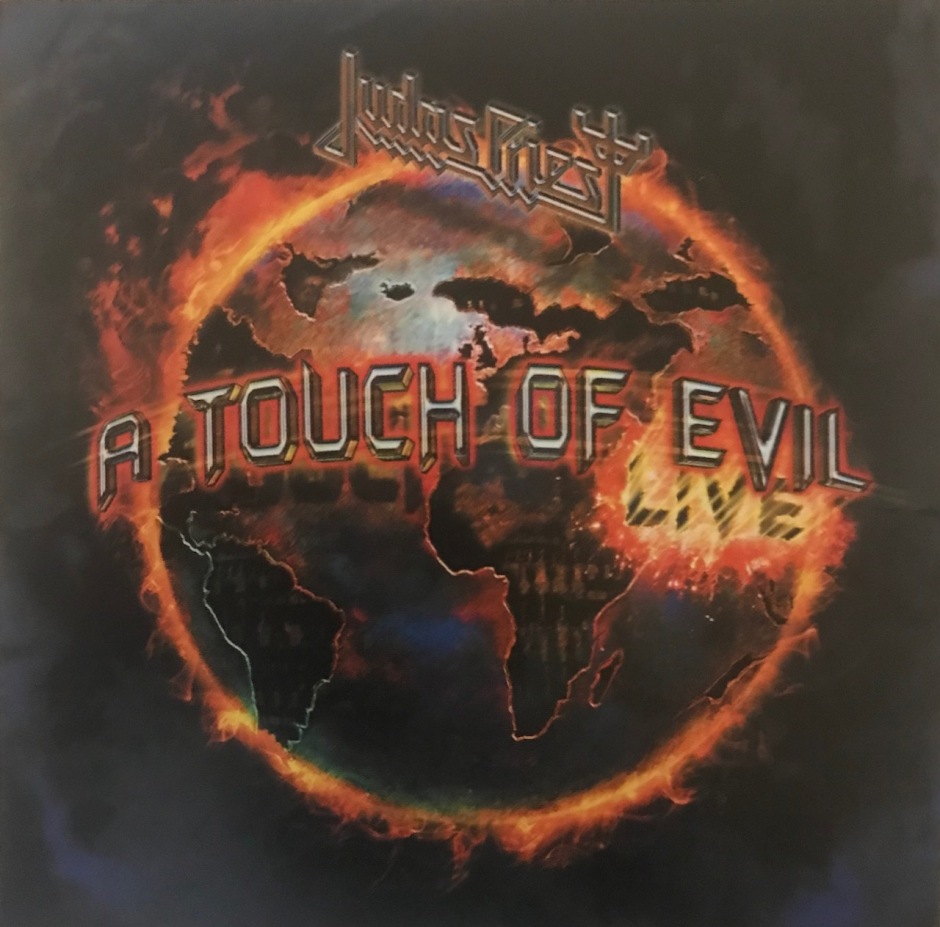 We are now to the final album in the box set, The Complete Albums Collection. Why is it the final album in the set, because it is the last album to feature original guitarist, K.K. Downing. This box set contained ALL albums that featured the 4 main members, Rob Halford, Glenn Tipton, Ian Hill and K.K. Downing. We know it wasn’t because of a single drummer as they close to a 1,000 drummers in their career…and yes, that is an exaggeration. This live album is also the band’s fifth live album, but only 3rd in this series. We won’t be doing the other two any time soon, so sorry about that fact.

This live album was the first one since Rob Halford rejoined the band and it is also noted for an old producer friend of the band sees his return. Tom Allom is back as co-producer with the band and I can’t say that was actually a good thing after you hear my complaints about this album. They did a good job about not repeating any tracks on any other Halford led Live album up to this point. There are a lot of repeats on the Tim “Ripper” Owen albums, but those don’t count for this conversation. Why don’t we jump straight in to this release.

The album took songs from the band’s tours in 2005 and 2008 and not from one show which is okay. The problem was they didn’t mix the album to sound like a full live show. Nope! Each song fades out and then the next song comes in totally ruining the live album effect. If you are going to make a live album, at least give it the feel that it is one consistent show even if it is not. It totally takes me out of the game when you fade the songs in and out.

The other thing that really bothers me with this release is the sound. The band is heavy as hell, that isn’t the problem, but it feels a little muddied to me. The mix doesn’t give me that live feel all the time. I don’t know what it is, but at times there is no soul to the release. The drums are brutal and Scott Travis is a freaking madman totally pummeling the skins. Maybe it’s the guitars as they don’t sound as crisp and clean as they should. Yes, that is where it is, the guitars. The mix really sucks for them, they lack a lot of punch. I feel they aren’t brought forward enough in the mix during the solos. It doesn’t mean the playing was awful as you can hear on “Between the Hammer and the Anvil” which was awesome with the dual guitar solo. And when you listen to “Death” and “Beyond the Realm of Death” there is some fine playing there that help make up for the sound.

Rob sounds great, but I’ll admit it, he can’t sustain some of those high notes like he used to hit and you know, that is okay. We all get old. It only detracted a little from maybe “Painkiller” which is kind of horrid on here, sorry. And it impacts “Dissident Aggressor” and “A Touch of Evil” a little but he does compensate for that shortfall and those songs are still great. But overall, he is still the Metal God and he doesn’t disappoint.

I think the real fans are going to love hearing these songs as we haven’t gotten the opportunity to hear Halford sing a lot of these prior to this on a release. Opening with ‘Angel of Retribution’ songs “Judas Rising” and “Hellrider” are great tracks to open the album with as that is an album that doesn’t get enough love. And speaking of under appreciated albums, ‘Nostradamus’ gets two songs as well with “Death” and “Prophecy” which are two great choices. They even reached far back in the catalog with a ‘Stained Class’ song called “Beyond the Realm of Death” which is a freaking classic. The furthest back they reach is a song I mentioned earlier “Dissident Agressor” from 1977’s ‘Sin After Sin’ so we do get a nice selection of songs which all seem to fit together nicely so for that they get points.

I think this album is for the die hard fans since these songs aren’t the most famous in the Priest catalog even though they are some of this best songs. I would start with the other two, “Unleashed in the East” and “Priest…Live!” first and then tackle this one. The things that bother me the most were the fading out of each song taking away from the concert flow and the duller sounding production of it. Maybe it is the CD, but I don’t think that is totally to blame. I give them props for the song selection as these songs really fit together and would make a hell of a show on their own. The band still is on fire musically and the dual guitars of Tipton and Downing is what you pay to hear and Scott is a beast of a drummer and Ian keeps the band moving forward with his bass. And Rob, good old Rob is the main draw for me as I think the Metal God title is not grand enough for him. The Overall Score is 3.5 out of 5.0 Stars mainly because of my two faults with album. They really did take away from my overall enjoyment of the release and I can’t deny that as much as I’d like to do so. If you are going to have a live album, make it feel like one live show and don’t make it obvious you pieced it from many different shows over the years.

And that is the end of The Complete Album Collection Series as we have now covered all 17 albums in the Box Set…However…this is not the end of the series. We will have 4 Bonus Editions to cover the 4 Studio albums that the Box Set is missing. The 2 Ripper albums and the 2 albums that were released after the box set was released. And then after the 4 Bonus Edition reviews, we will do an Album Ranking of all the Studio Albums. So, don’t worry…it ain’t over yet.