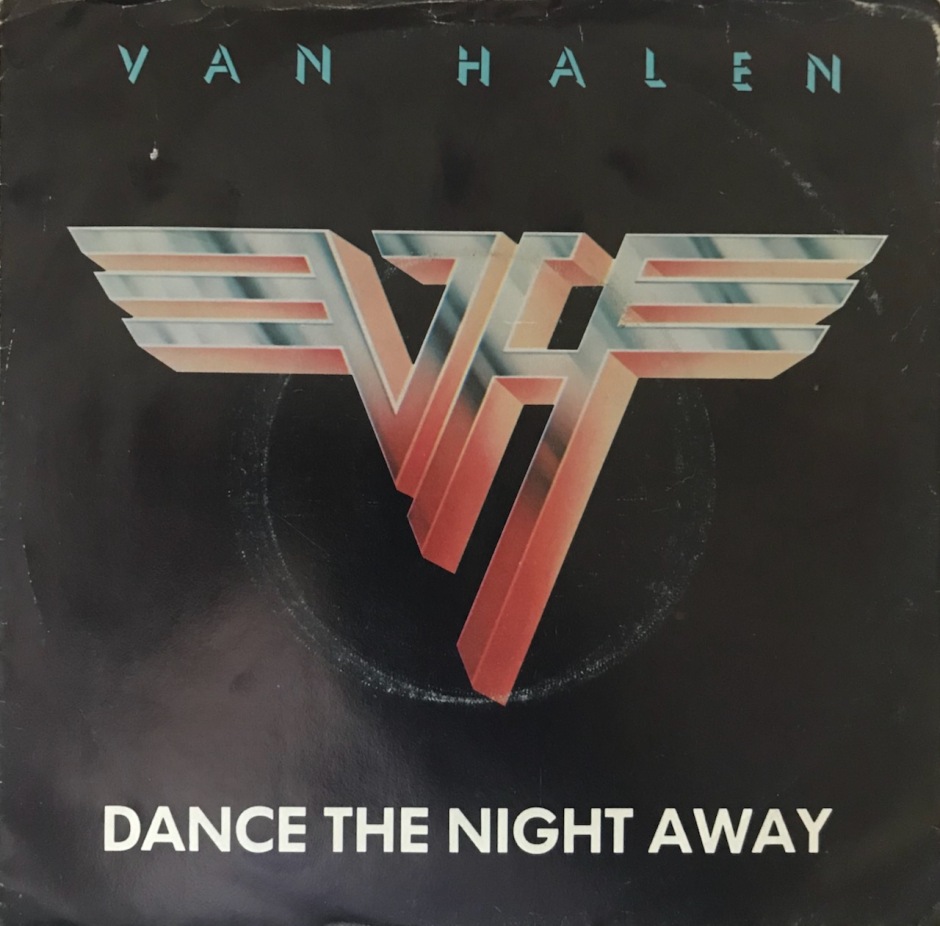 When I was on vacation during this past Summer, I found a ton of 45 Singles with the Picture Sleeves at a place called House of Vinyl and I ended buying 7 Van Halen 45’s. For the next 7 weeks, we will go through those singles in release order. And first up is “Dance the Night Away” from 1979.

For the band’s second album, “Dance the Night Away” was the first single released for the album. The copy I have is actually a promotional copy so the song “Dance the Night Away” is on both sides. Why is that you may ask. That is because as a promotional copy this was sent to radio stations. The first side has the song in Mono and B-Side is the same song but in Stereo. That way the radio station could use the side that fit their format if they were either an AM Radio station or an FM, I presume. The song is I believe the album track and not a edited version so nothing special about it other than it is cool.

The song was originally titled “Dance, Lolita, Dance” according to David Lee Roth, but Edward Van Halen thankfully talked him out of it. The song was one of the few off Van Halen II that were actually conceived in the studio and done so when the band was standing in a circle humming to each other. And according to Wiki, the song was inspired by Fleetwood Mac’s song “Go Your Own Way” which I can see. The song is a little more upbeat and less hard rock and maybe even more pop rock.

Because of that different sound, the band didn’t want this released as single because they felt it didn’t represent the sound of the band. Of course, being a new band and only on their second album, they lost that fight. It turns out, it didn’t hurt them at all and actually brought them a ton of new fans. The single went to #15 on the charts and catapulted the album to sell over 5,000,000 copies. Not bad!!

The song opens with some cowbell and you can never have too much cowbell. Then Eddie lays down a cool riff and Michael and Alex bring the rhythm section in before Dave’s slick lyrics come in. Like I said earlier, the song is not a heavy metal or even hard rock song. It is a little lighter and more of a pop rock sound and a little dance beat, but it is still rock. There is no real guitar solo in it because instead Ed does something called a tap harmonics and I couldn’t explain that to you if I tried so click the link if you want to know more. The song is light and fun and does make you want to dance a little and in 1979 a lot of people were doing just that. Overall, it is a fantastic track and shows the band isn’t a one trick pony with their sound. Producer, Ted Templeman wouldn’t steer them wrong.

And we will see you next week for the next single in the series which is….wait, I’m not going to tell you. You can wait and see. Thanks for hanging out with us.