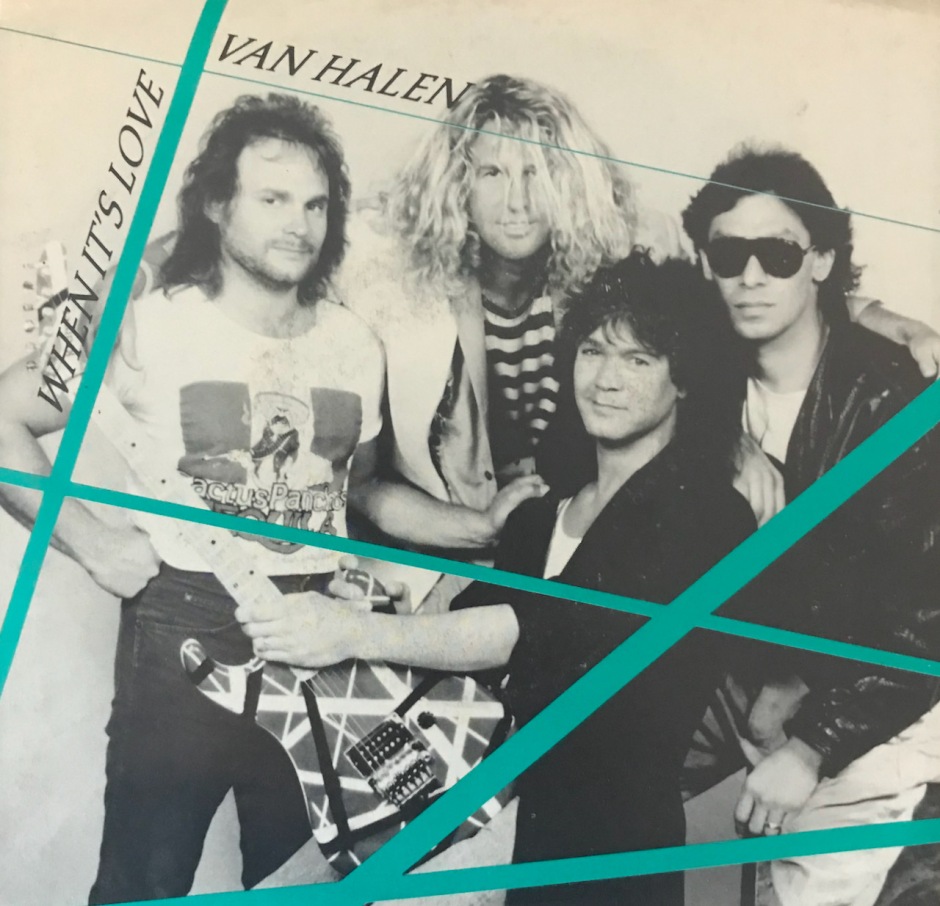 When I was on vacation during this past Summer, I found a ton of 45 Singles with the Picture Sleeves at a place called House of Vinyl and I ended buying 7 Van Halen 45’s. And we’ve been through a few so far as seen below…

And now we are on final Van Halen single and we are still in to the Hagar Era. This was the second single off their second album with Sammy called ‘OU812’. The song is “When It’s Love” and it was the most popular song off the album. The song was released in June 1988 and went to #1 on the Mainstream Rock Chart as well as #5 on the Billboard Hot 100.

My copy of the single is the standard U.S. version with the B-Side being “Cabo Wabo” which you wouldn’t know that from the back cover as it doesn’t say anywhere what the B-Side is. When I first saw it, I was hoping it was a promo with the same song on each side and one in mono and one in stereo, but I don’t if they actually had those still in 1988. Regardless, my copy is in pretty good shape and plays perfectly which is all that matters.

Now both tracks on the single are the LP versions and no single edits. As I’ve mentioned in the past reviews, Donn Landee’s name is on the Single write under the writers which is something Ted Templeman started back in the David Lee Roth era. Nice to see that trend continued here.

The song “When It’s Love” is a very sophisticated sounding ballad. It is one of the best the band has done with Sammy, hell, with anyone. It sounds so mature, thought provoking and felt so heartfelt in the emotive way Sammy sang it. It does have a lot of keyboards/synths, but it has a guitar solo that Eddie says is actually a nod to Eric Clapton and I think I can hear it. I like how the closing of the song builds a little with intensity and then delivers on the end. It is a power ballad that doesn’t take the power too far and keeps it subtle. It is a modern sounding song in an era that was sounding too stale and same-same with each ballad. This was a cut above the rest.

The B-Side is called “Cabo Wabo” from the album OU812 as well. The song was inspired by Sammy when he was down visiting his house in Cabo San Lucas down in Mexico. It would later become the name of his tequilla. Sammy stole the melody from a Montrose song called “Make It Last” and since he was in Montrose, I guess he borrowed it and didn’t steal it. The song has a beach vacation vibe and makes you want to sit out in a hammock under the palm trees out by the beach with an umbrella drink in your hand. The song has some great harmonies thanks to the help of the always vocally brilliant Michael Anthony. It is fun song and a great B-Side.

And there you have it. That is the last of the 7 singles I picked up while on vacation this past Summer. It has been a fun trip through them and I hope you enjoyed them. Before we get in to the next long run of singles I also found on that trip, I am going to highlight a couple 12″ Singles I recently found that I think are pretty cool. See you next week.