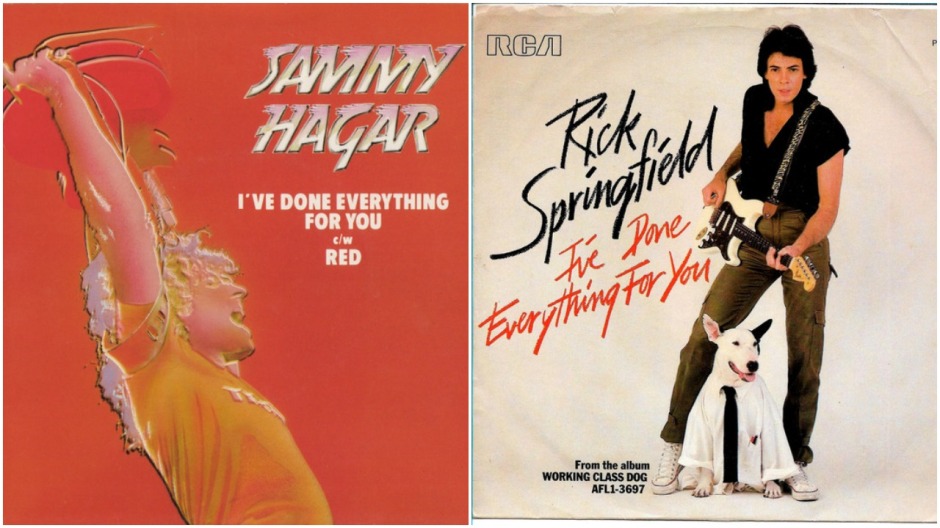 For this installment of The Original vs. The Cover we are going to discuss the Sammy Hagar track “I’ve Done Everything For You” which was later covered, more successfully I might add, by Rick Springfield. The original release of the song was a live version from Sammy back in 1978 on his live album ‘All Night Long’ which did not chart. Rick’s version came out as a single in 1981 and was the follow-up to his massive hit “Jessie’s Girl” and as a result went all the way to #9 on the Billboard Hot 100.

The song had been a constant in Sammy’s live shows which is why a live version was released. The studio version was done in 1979 and released as a B-Side to the song “(Sittin’ on) The Dock of the Bay” an Otis Redding Cover. It finally saw a release in 1982 on his greatest hits compilation called “Rematch” which was only done because of the popularity of the Springfield version.

The song seems to be about a relationship/an affair that was really one-sided. He gave everything to her, but she didn’t return that favor. I’ve also heard that it could possibly be about a manager or label where Sammy worked his ass off for them and got nothing in return. I am not sure which is true, but I am leaning to the relationship as it is spelled out specifically in the song, but Sammy could be using that as a pretty damn good metaphor. Either way, I like it.

We are basing Sammy’s version on the live version since it came first and being live the song is a chugging rocker and has a lot more life than his studio version which sounds so flat and lifeless. I picked the live as it has a better chance against the Rick Springfield cover. I really like the drumming on the track as Denny Carmassi is a monster on the drums. His fills and rolls are killer. The guitar is there, but doesn’t really standout is impressive. Sammy, of course is Sammy, and he sounds great giving it his all. It is a great live version of the song and so much better than his studio version. But is it enough to win.

Rick’s version is pumped up adrenaline and completely rocks out. He sticks to the lyrics and the music of the original but he takes it to another level. The guitar work on this one is killer as the opening riff sets it apart from the lifeless opening of the original plus there is a massive solo and the credit goes to either Robben Ford or Pat Benatar’s Nick Giraldo as it doesn’t credit anyone with the solo but they both played on the album. I am leaning to Nick as Pat Benatar was actually offered the song to sing and she declined. The drums are almost as effective as Denny’s as there are some great fills and the groove is sweet. Again, many drummers listed on the credits but not sure who played on the song. But it is the vocals on this one that are really fantastic as Rick really is feeling the song as his vocals are more intense and definitely angry. His energy and passion are laid to bare and he leaves nothing on the table. It is a catchy pop/rock song and I can see why it did so well and was a perfect follow-up to “Jessie’s Girl” as it had a similar vibe.

Well, I think it might be obvious who I am going to pick and you’d be right. I think Rick Springfield’s version is far superior to the Sammy Hagar original version. Rick made the song his own and he really seems to connect to the song as you can feel his passion in the vocals. Musically, the production is ten times better (even better than Sammy’s studio version). The guitars are more prominent and I feel it rocks out more in Rick’s version. It is overall a stronger, catchier and more radio friendly track.

“I’ve Done Everything For You”

There was so many things about makin’ love you didn’t understand
(You’ve done nothin’)
Yeah, but now you know about everything
And I’m tradin’ you in on a pair of wings

Now I’m going out on the town tonight and get as wild as I can be
I’m gonna find out what it’s really like to be loose, high and free
Yeah and I don’t care what them people say
‘Cause I’ll change my mind, I’m changin’ to stay

19 thoughts on “The Original vs. The Cover – “I’ve Done Everything For You””