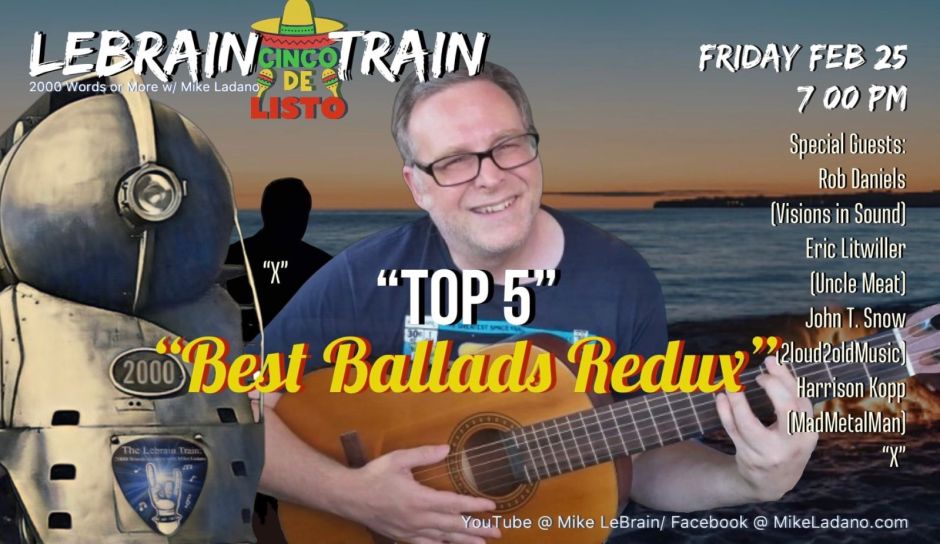 Join me tonight on The LeBrain Train as we go through our Top 5 Ballads!! See what Mike Ladano says about his show below…

The LeBrain Train: 2000 Words or More with Mike & Friends

On July 3 2020, we did the Nigel Tufnel Top Ten Ballads on the LeBrain Train with six sets of lists.  And it was great!  We had lists from Meat, Harrison, Holen, Darr, and Len Labelle.  Unfortunately due to Facebook Live and a bad internet connection, I find this show impossible to watch today.  Harrison and I have been trying to talk Meat into doing a “remastered” version of the show in the new Cinco De Listo format for a long time, and we finally twisted his arm.  The new panel tonight:

“X”?  That’s right.  This week’s show is not just a list show.  There will be a sixth panel member, and that member’s voice and likeness will be obscured for the whole countdown.  It will be up to the others to figure out who “X” is, and they have five songs with which to do it.

I love a mystery and I’m really looking forward to this!  Tune in tonight for six lists of awesome ballads, and a little Friday evening mystery too.  Where’s Mulder when you need him?

5 thoughts on “TOP FIVE BALLADS REMASTERED…WITH A TOUCH OF MYSTERY! TONIGHT ON THE LEBRAIN TRAIN ”