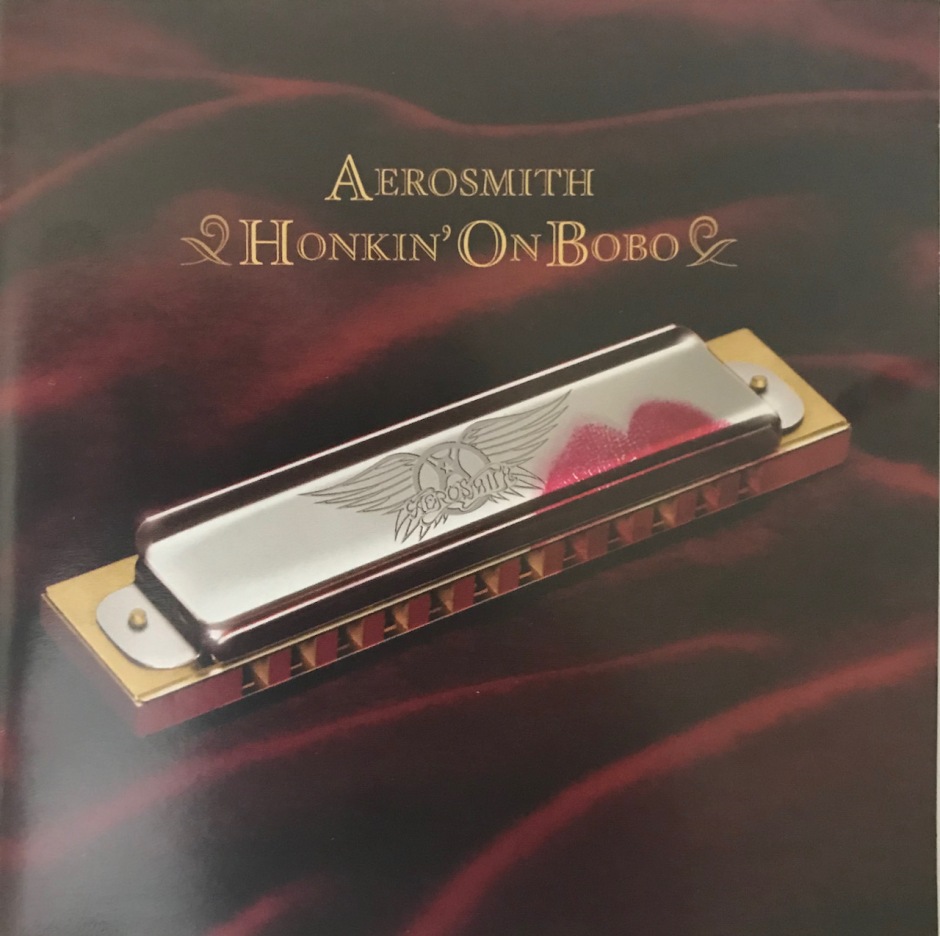 For the band’s 14th studio album they wanted to go back to their roots. They wanted to kick it old style. To do that, they decided to do a covers album of all Blues tracks! And to really make it old school, they brought back Jack Douglas as producer and they only recorded it live in the studio with all members of the band like they did it in the old days. The album takes us back to their sound of the 70’s and away from all the more recent over-produced crap that they had been releasing of late.

The album was recorded over most of 2003 as they really only recorded when they could all get together and they were all in a good mood. And you can imagine how little that probably was with this history of this band. Most of the work was done at Joe Perry’s Studio at his ranch near Boston. When they finally finished, the album got its release on March 30, 2004 and quickly sold over 100,000 copies in its first week putting it at #5 on the Billboard Charts. Today, that would easily be #1. But it did go to #1 on the Blues Chart and eventually went Gold with over 500,000 copies sold. The album wasn’t as successful as their past hits, but a Blues album to go Gold is pretty darn good. Steven Tyler, Joe Perry, Brad Whitford, Tom Hamilton and Joey Kramer will still together and doing what they loved, so for them that is a success on its own.

The album had 11 covers and 1 original blues song by the band. There are traditional blues songs from way, way back to even a Fleetwood Mac song. And the title ‘Honkin’ On Bobo’ is from a phrase Steven Tyler had heard but they don’t really know what it means. They thought it sounded cool and bluesy I guess. I thought Bobo might be the harmonica and honkin’ on it was playing the harmonica, but who knows. Let’s get to the music.

The album kicks off with a Bo Diddley cover of “Road Runner” with a spoken introduction by Steven and a climatic building of the instruments until the let loose completely. It is a groovy track that harkens back to the 70’s era Aerosmith which is fine by me. It is a rocking tune I feel was a great song choice to kick off the album especially with each person getting a small solo spotlight including the guitars, the drums and the bass. It sound like the band is having fun so I guess they were in a good mood this day.

Next up is a Smiley Lewis cover of “Shame, Shame, Shame” at at just over 2 minutes it is a wham, bam thank you ‘mam type song. You get blues pianist Johnnie Johnson tickling those ivories and some nasty guitar work by Joe and Brad. It is a fast paced, bluesy track with the guitar work being the major highlight as it slays. It is a shame it didn’t go a little longer, but thankfully we got what we did.

“Eyesight to the Blind” is a Sonny Boy Williamson II cover and again more fantastic guitar and some great harmonica work on here by Tyler. This one feels like it should be more traditionally blues but it is only Aerosmith blues which isn’t really traditional. I am not sure they pull this one off as well as it should be. It feels fake and not convincing enough to me.

Then we get a Them cover of “Baby, Please Don’t Go” and all I can say do we need a cover of a song that has been covered a million times. I don’t think we do. It is a sped up, rocking tracking with some great bass work by Hamilton, some great guitar and harmonica as well, but I’m not feeling it. To me this isn’t the hit on the album. I would say the band is having fun with it as they are tight and smokin’, but the song is so overplayed by bands that it loses me as a result.

“Never Loved a Girl” is an Aretha Franklin cover of “Never Loved a Man”. It slows things down with a good and dirty groove. The horn section is done by The Memphis Horns from the Stax Record days. Steven does his best Aretha vocals but no one could come close to her greatness, but he does well enough. He does hit some crazy falsettos though so there is no denying he is giving his all on this one. For that, it gets a passing grade.

Next up is the first of three Mississippi Fred McDowell covers with “Back Back Train” first. Here we see Mr. Joe Perry on the mic this time around. We also get some assistance from Tracy Bonham on vocals as well. This is gritty, slowed down and nasty blues cover with some fine, fine guitar work and a bass drum beat that hits you in the gut. Joe sings it slow and deliberate and with Tracy’s accompaniment we get one of the coolest songs on the album. Later, Joe lets loose on the vocals and puts a lot of emotion in to it and it is now one of my favorite Perry sung songs by the band.

The second Mississippi cover is “You Gotta Move”. Steven nails the harmonica work on this one. The song is more upbeat and chugs along with a great rhythm section by Joey and Tom as they really lay it down on this one. It is a fun upbeat track that will get you moving like the title says. Not quite the Delta blues style you’d expect, but I like it regardless as it sounds like something that could’ve been on their first two albums.

Then we get the only original Aerosmith song with “The Grind”. They try their best to create a classic sounding blues song but it sounds like what we’ve heard with all their more recent hits and doesn’t really feel like a traditional blues track. Good on them for trying but they should have stuck with all covers for this one as this was a grind to get through.

Then we get the Muddy Waters cover of the Willie Dixon song “I’m Ready”. Imagine you are in a dark, smoke filled bar and that is the feel of the song. Steven really gets gritty with the vocals and plays it up. He is the highlight on this one with his lyrical delivery. More great harmonica, great dirty guitar riffing and Joey’s drumming is on point. I can dig this one as it is old school Aerosmith to a T.

“Temperature” is up next which is a Little Walter cover. Johnnie Johnson is pack on the ivories, Steven honkin’ on his bobo and singing with effects on his vocals like he is singing in a box. Tom’s bass groove is great and the secret behind this one. A traditional style song that comes at you like a train rolling down the tracks.

Next is the Peter Green’s Fleetwood Mac cover of “Stop Messin’ Around” with Joe Perry back on the vocals. I swear he sounds a little like Stevie Ray Vaughn with this one as that is who I picture singing and playing when I hear it. It is an upbeat rocker with some great blues guitar playing and I love this type of music. Steven adds some flavor on backing vocals and harmonica and it feels like the boys are in a good mood again!!

The final track is third Mississippi Fred McDowell cover with “Jesus is on the Main Line”. Tracy Bonham is back on vocals along with Steven giving us a choir, church like feel. The steel guitar by Perry rules the roost on this one. I love Tracy’s vocals as she really is the highlight on this one and please give me more of her!!! It is a full on jam session and a great way to go out.

The Track Score is 8.5 out of 12 or 71%.  Now, I know a lot of people don’t like this album, but I think compared to the over-produced same old shit from the last couple albums, this at least a nice change.  A step back to why they got in to music in the first place. Their first love.  They got in to the room together again and played the album live in the studio to capture the magic that had been missing for years.  No, this isn’t a true traditional blues album and it doesn’t all work, but it as blues as Aerosmith is going to get.  And I am okay with that. It took me back to their earlier days and that is my favorite era of the band. For the My Overall Score is a 3.0 out of 5.0 Stars.  I dug it, I got what they are trying to do and I respect them for that. At this point in their career, they can do whatever the hell they want and here, they did just that!  This album was for them and why not.

Look what showed up a day early. I like getting the album before it is officially released. Shinedown’s ‘Planet Zero’ is ready for a spin.
Takara’s ‘Taste of Heaven’ with Jeff Scott Soto on vocals. Check out the review on 2loud2oldmusic.com.
Didn’t think I’d ever get one of these on vinyl! 25th Anniversary Edition of Greatest Kiss.
The LeBrain Train is proud to announce the upcoming interview with the super talented @jasonbieler. I will be joining @mikelebrain as co-host to talk Jason's new single "Sic Riff" plus the upcoming album as well as @saigonkickofficial and #Supertransatlantic plus the rest of his solo work. And maybe even the Soto/Bieler Shows. Don't miss the fun!
The vinyl and cassette finally showed up. The Def Leppard orders of Diamond Star Halos are now complete.
@defleppard the Diamond Star Halos Japanese CD Editions have arrived. 2 different bonus tracks on each one. Plus came with 2 stickers.