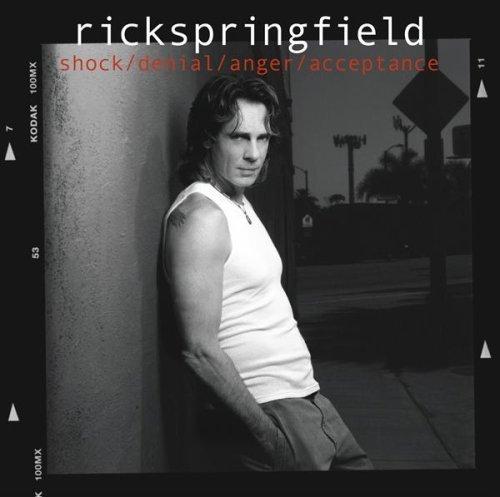 ‘Shock/Denial/Anger/Acceptance’ (SDAA for short) came out in 2004 and it was the album that reintroduced me back to Rick Springfield.  It had been 5 years since his last album ‘Karma’ in 1999, but I was in a bad place at that time and completely missed that album.  For me, this was his first album since ‘Rock of Life’ in 1988…16 years earlier.

I hadn’t completely forgotten about Rick Springfield, but he certainly wasn’t top-of-mind anymore.  That changed with this album.  When I heard this album I wasn’t sure who was I listening to at the time.  It was such a high energy, hard rock album that I could not believe it was Rick Springfield.  He was a pop star not a rock star.

SDAA has 17 tracks that range from 56 seconds to 3 minutes & 42 seconds.  This makes the album scream along at a fast pace and it will take you through every emotion mentioned in the album title.  Anger, however, seems to be the leading emotion on the album and I am okay with that.

The opening song, “Perfect”, comes rocking out of the gate and you realize this is not the same old Rick Springfield you grew up with. There is more of an edge and roughness to his style and voice.  That energy continues straight into the next song “I’ll Make You Happy” and gives you no time to breathe.

“Will I?” is the third straight high energy song.  This one is about infidelity and his shock and anger come through loud and clear, but I don’t think there is acceptance as he can’t let it go and seems to want her back (major denial).  The anger and story seems to continue with “God Gave You to Everyone” as it mentions that she is sharing herself all around.

Since we are now at song 5, you would think you might be able to catch your breathe, but you would be wrong.  “Idontwantanythingfromyou” continues on the fast pace and still seems to be a lot of anger in him.  “Jesus Saves” is up next.  If he is still talking about the same young lady, he feels that “Jesus saves white trash, baby like you”.  Gotta love it.

“Beautiful You” finally seems to be coming up on acceptance.  And then we go in to “Wasted” which might be my favorite song of the album (even though there are many of those on this album).  A little more laid back, but not by much.  A great chorus and tone to the whole song.

Things start to slow down now with a short little instrumental called “Shoot Your Guru” that goes into “Alien Virus”.  A jazzy little tune and nice change of pace.  “Angels of the Disappeared” is an acoustic ballad and a beautiful song.  Rick’s voice has a raw sound in this song and makes you feel all the emotions he is feeling.  The song seems to be about missing & runaway children and is a very touching tribute.

“Eden” is a little upbeat with some nice orchestra and has a softer tone.  “The Invisible Girl” starts back on the rock path and has a great chorus.  And it picks up a little more on “My Depression” obviously about his depression.  “Your Psychopathic Mother” is another great song on a long list of great songs.  It slow downs and rocks out intermittently throughout the song.

The last full length song on the album is “Every Night I Wake Up Screaming”  and it is one of my favorites on the album.  It is a screaming rocker with some heavy drums and guitar work.  It is one of the heavier songs on the album and slap out rocks.  Lastly, is the short song “Open My Eyes” at only a little over a minute.  It is a nice little acoustic piece where I think he fully has acceptance on the betrayal of the woman in his life.

I can’t really say enough great things about the album. The concept of the album is brilliant about all the roller coaster of emotions you go through on such a betrayal by someone you love and would never have suspected.  In my opinion, this is my favorite Rick Springfield album.  Yes, even better than ‘Working Class Dog’.  My only disappointment with the album were no actual videos.  Only the audio video versions.

You can download the album from Amazon or buy a used CD, but you can’t get it from iTunes or even stream it on Apple Music or Amazon Prime.  Sad.