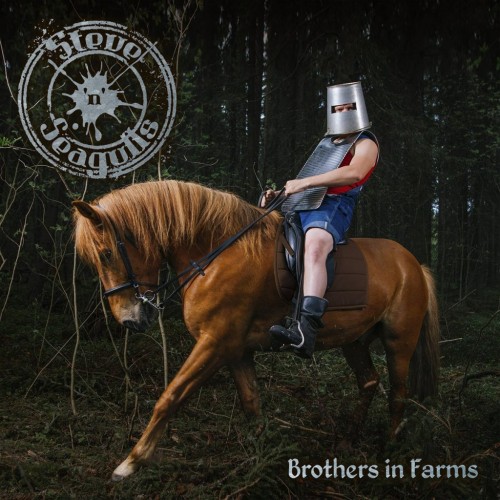 It is finally time for another music challenge.  Go and listen to an album based solely on the Band’s name, the album name or the album cover.  Let me know what you pick, why and what you thought about the album.

Here is my pick for the music challenge…The band is called Steve ‘n’ Seagulls.  The name of the band and that unusual album cover are why I picked this one for my music challenge.  The band name is a pun on the iconic actor (not really iconic) Steven Seagal.

Apparently, this is the band’s 2nd album.  They are known for playing bluegrass versions of Hard Rock and Metal songs.  I didn’t know what to expect, but I can say that what I heard was nothing like I imagined.  It might even be better than I could have imagined. ‘Brothers in Farms’ is a covers album and they put twists on these songs that make it completely and utterly their own.

With the amazing banjo playing, the stand up bass, mandolin, accordian and just the overall country sound, they turn these songs into something completely new.  I didn’t even know it was a covers album until I started listening and realized that the songs sound so strangely familiar and then it hit me.  At first I didn’t know if this was a joke or what, but I think I get it all now.

They start off on a high note with Iron Maiden’s “Aces High”.  You have to see the video to really understand what these guys are all about.  It is crazy and unusual, but it is a blast and a fantastical music experience.

Their cover of “November Rain” is so worth the price of admission.  I wish they had a video for this song, but the audio track will work.  The deep vocals and banjo give it such a cool touch.

Their one original song, “Fill Up the Tank” is actually pretty good and maybe they will do more original material in the future.  The other standouts for me were “Symphony of Destruction”, “Out in the Fields”, “Burn” and “The Pretender”.

The band is a five piece and consists of the following members:

Their names make me think they should be Pokemon characters (except for Herman…that one is normal).  If you are in the mood for something so completely different that it will blow your mind, then you have to listen to this album.  If you do, your life will be changed forever…or at least for the 55 or so minutes you are listening to the album.

The song that made them somewhat Youtube stars was their cover of AC/DC’s “Thunderstruck”.  Herman is freaking killing it on the banjo!!  It is off their first album ‘Farm Machine’ and has had over 28 million views.  Check it out as well.