My First Time is about the ‘first’ album I received or bought for a band and sadly, my first album for The Police was ironically their last.  MTV had played their previous songs quite often and I loved “Don’t Stand So Close To Me” and “Every Little Thing She Does is Magic”, but it wasn’t until “Synchronicity II” that I finally decided to actually buy one of their records.

I picked up the cassette for ‘Synchronicity’ back in 1983 and later I did pick up their entire collection on CD by buying their box set which had all their albums.  I have since sold all the previous copies and when I was out vinyl shopping last year, I found ‘Synchronicity’ and snatched it up.  It cost $8 which was about the same price I paid for the cassette back in the ’80’s.

The Police were not an ordinary pop rock band.  For me, their lyrics were intelligent and not the bubble gum crap that was on the radio.  The songs made you think and look deeper into what they were saying.  At least they did for me.  It was the first time I felt music could be smart.

With the opening track, “Synchronicity I”, you are blown away by the amount of music these 3 lads can produce.  It immediately grabs your attention and gets your feet stomping. Sting flies through the lyrics and it is hard to keep up.  Lyrics like…

“A connecting principle,
Linked to the invisible
Almost imperceptible
Something inexpressible.
Science insusceptible
Logic so inflexible
Causally connectable
Nothing is invincible”

He says them so fast, but you can understand every word he says.  At my age at the time, these were smart lyrics. I didn’t know what he was trying to say, but I didn’t care.  They sounded important.

The next track was “Walking In Your Footsteps” and I thought these guys are science freaks.  They are talking about dinosaurs.  Well, they were and they weren’t.  I took it as they were comparing our time on earth to the dinosaur and how we will be extinguished like they were.  We are currently God’s favorite, but that will someday change.

“O My God” slowly comes in with a heavy bass and drum beat and than Sting comes chiming in.  I loved how different  this song was from the others.  Actually, the whole album is nothing but variety.  The Police definitely like to change it up and that is what makes this album so special.  It’s uniqueness especially from what else was out there in the music scene at the time.

The only song written by Andy Summers is the strange and marvelous “Mother”.   He also sings on this one (or screams, whichever way you want to look at it). Whenever the phone would ring in the house, I would scream out “The Telephone is ringing, Is that My Mother On the Phone”.  I still do that today and my kids look at me like I am nuts.  It is by far, the most bizarre song and I love it.

“Miss Gradenko” feels like a Cold War era love song about forbidden love in the Kremlin.  The song was written by Stewart Copeland and it is quite possible that is what the song is about as his dad worked for the CIA.  I read that online somewhere, so it must be true.

The final song on Side One was “Synchronicity II” and the reason I bought the album.  This was, and still is, one of the coolest songs I have ever heard.  It is the most rocking song on the album and Sting sounds amazing.  Musically, there is so much going on and so many unique sounds that I feel I discover something new each time I listen.  Are you sure there only 3 guys playing?

Side Two kicks off with the most misinterpreted Love Song of all time…“Every Breath You Take”.  So many people would dedicate this song to their girlfriend/boyfriend as a love song and not realize it is a rather creepy, disturbing song.  Nowadays people get arrested for this kind of stuff.  “Every Breath You Take” is a pure Stalker song.  The person behind this song probably could be the poster boy for domestic violence and would make singer Chris Brown look like a saint.  Regardless, it is a fantastic and beautiful song.

Another big hit and one of my favorites is “King of Pain”.  I like how it starts off a little slower and darker and then kicks in to a more rocking beat.  Another song that is lyrically amazing with all the different analogies he is using and that I wouldn’t think would work together in a song, but mesh nicely together.  It is so dark without coming off as depressing which is the magic of the song.

“Wrapped Around Your Finger” was so above my head lyrically.  I didn’t understand half the words that were coming out of Sting’s mouth.  “Scylia”, “Charibdes”, “Mephistopheles”.  At 14 or so, I was like WTF???  Now I know that the first two are references to Greek Mythology and the last is another name for the Devil.  The song is about being under the control of another person and is another reason I feel they were so intelligent songwriters. Sting is one of the greatest songwriters…enough said!!

The last song on the album is “Tea in the Sahara”.  At the time, it was my least favorite song on the album.  It is still not one of my favorites, but wonderful all the same.  I hadn’t been able to figure this song out and what it means. 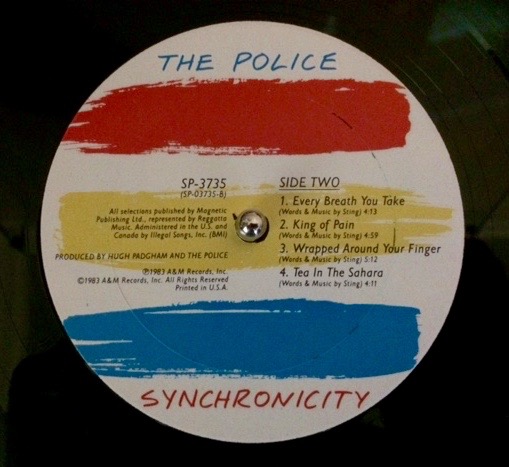 ‘Synchronicity’ will always be one of my favorite albums.  It still holds up today some 34 years later.  Even listening to it on repeat while writing this post, I don’t ever grow tired of it.  I hope you give it a listen if you haven’t heard it before. If you have heard it before, spin it again.  The Police broke up shortly after this album as they wanted to go out on top, which they did.  I hate the fact I never got to see them perform live and after all this time, there is no signs that a reunion will ever be possible.  I will keep them on my wish list in case they do.

18 thoughts on ““My First Time” with The Police’s ‘Synchronicity’”