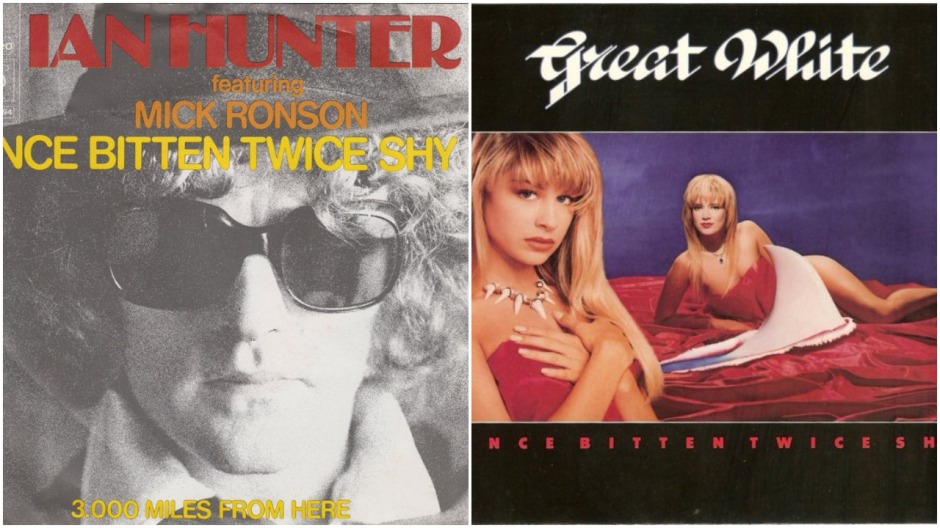 For this version of The Original vs. The Cover, we are covering (pun intended) Ian Hunter’s classic “Once Bitten, Twice Shy”.  The song was written by Ian and included on his self-titled solo album he released in 1975 after his departure from Mott the Hoople.  The song went to #14 on the UK singles chart and was produced by Ian and great Mick Ronson.

The song hasn’t been covered by a whole lot of acts, but one of the most famous was by Great White.  So, let’s sit back, have a listen and compare the two and determine who has the best version of “Once Bitten, Twice Shy”.

The song tells the story of a rock musician who meets a girl why he is out on tour and becomes intimate with her (meaning he has sex with her).  He thinks she is young and innocent until to his dismay he discovers she has been around quite a lot and been with a lot of other musicians.  It is a classic tale of old!!

The title of the song comes from the old expression meaning once you have been hurt once, you become less trusting and cautious going forward.  The phrase dates back to 1484 and is traced back to an English printer (William Caxton), the first to publish a translation in to English of Aesop’s tales.  There is your history lesson for the day.

Now, let’s focus on Ian Hunter’s original version.  The song has an old time rock & roll feel to it and even has what sounds like a carnival piano or at least has that feel to it towards the beginning.  It sounded like more a regular piano later in the song.  A nice slow groove to start before it kicks in harder later in the song.  The faster tempo gets you moving and it really pulls you into the song. The musicianship is really exceptional throughout and having Mick Ronson on guitar, well, what else is there to say.

Ian’s vocals are actually not that much different than Jack Russell’s from Great White with some minor exceptions of Ian sounding British a couple times.  They both have a grittiness to them. Ian really gets into in the later half of the song and the whole thing just picks up and becomes a fun and exciting rock song.

The Great White version was released in 1989 and it updates the sound to fit the current 80’s hair metal sound of the time.  The piano sounded more like a piano and the guitar work and solo definitely had a harder edge to it.  The chorus had more harmonies and sounded like more people singing than the original which was seemed to be just Ian.  Otherwise, the song was very similar and not much was altered, except for some lyrics and adding about 39 seconds to the length of the song.

The band changed the lyrics up as well such as in the original it says “greyhound bus”, but Great White changes it to “grey tour bus”.  There are several other tweaks as well including “All the blood on my hand and my Les Paul heat” was changed to “There’s blood on my amp and my Les Paul’s beat”.  They also made the girl’s sister seem like she was more of a tramp when the line was changed to “guys from group” not just one guy like the original.

This was a tough one for me as I do love both versions.  When I thought of this song and doing this post, I was leaning more towards Great White out of the gate for two reasons.  One, I liked the heavier 80’s sound.  Two, the Great White version was just more fun overall or at least so I thought. Okay, I have a third reason.  The Great White version was the first one I heard and lived with longer.  It was years later before a) I realized it was a cover and b) I had ever heard of Ian Hunter and got into this music.

But after spending a lot of time comparing to the two songs, I realized how awesome the original version really is.  Ian’s vocal inflections and just his whole approach to the song really had more heart to it than the Great White Version.  The Great White version is really great as well, but by a small margin for me I am going to give it Ian Hunter. He and Mick Ronson made a classic pure Rock & Roll Song.  It glorifies the Rock & Roll lifestyle and painted such a great picture of what a touring musician goes through trying to have a relationship while on the road.

Listen to both versions and let me know what you think in the comments.

Well the times gettin’ hard for you little girl
I’m a hummin’ and a strummin’ all over god’s world
You don’t remember when you got your last meal
And you forgot just how a woman feels
You didn’t know what rock n’ roll was
Until you met a drummer on a greyhound bus
I got there in the nick of time
Before he got his hands across your state lineWell in the middle of the night
On the open road
And the heater don’t work and it’s oh-so cold
You’re gettin’ tired, you’re lookin’ kinda beat
The music of the street, drive you off your feet
You didn’t know how rock n’ roll looked
Until you caught your sister with a guy from the group
Half-way home in the parking lot
By the look in her eyes she was givin’ what she got

You didn’t know that rock n’ roll burned
So you bought a candle and you loved and you learned
You got the rhythm, you got the speed
Mamma’s little baby likes it short and sweet

I didn’t know ya got a rock n’ roll record
Until a saw your picture on another guy’s jacket
You told me I was the only one
And look at you now, well it’s dark as it’s dumb

Written by: IAN HUNTER
If you are interested, there were several other covers of the song.  They were as follows:

27 thoughts on “The Original vs. The Cover – “Once Bitten, Twice Shy””