If you follow this blog at all, you will know I am a Kiss fan.  I am not the crazy fan that collects everything although I am starting to have those tendencies and might be there soon.  I am a fan that wants their music whether it is vinyl, CD or DVD, I want it.  I have been working really hard on doing just that.  I have a long way to go, a very long way to go, but I feel I am off to a good start.  I am not missing much on the vinyl set; however I still need a few.

This post is just to document where I am with the collection.  The Turntable & Vinyl series is basically a diary of sorts of my vinyl adventures and this adventure needs a good update, so here we go.

I have broken it apart into sub-eras.  The first era is of course the debut up to Kiss Alive I.  When I started this blog, it talked about a box of vinyl I had, well in that box were Alive and Hotter than Hell.  I have since found Dressed to Kill and just recently bought Kiss (the debut).  I bought a new copy as I wasn’t having much luck finding a decent used copy, plus the new was only $12 which is what I probably would have paid (if not more) for a used original.

The next era was up to Kiss Alive II and consisted of Destroyer, Rock & Roll Over, Love Gun and of course, Kiss Alive II.  I don’t think any of these were in the box.  I have had to find all of these out in the wild.  At one time I had two Rock & Roll Over’s as I didn’t check my Discog list when I was shopping and couldn’t remember getting it.  That is okay, I traded it in towards a Led Zeppelin Physical Graffiti. 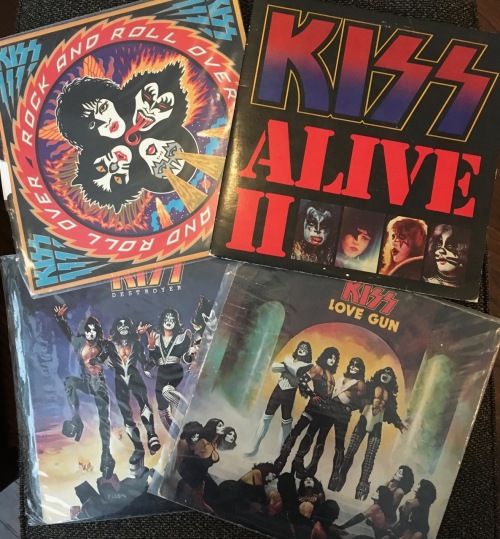 Next up is the Kiss Solo Collection.  I have Gene, Paul, Peter & Ace and the set actually includes the posters.  These were in the big box of vinyl.

The next era is basically the remainder of the 70’s which was Dynasty & Unmasked up to The Elder.  It isn’t considered their best era, but I do like a lot of these songs so I don’t have an issue with it at all.  I thought Unmasked was quite good.

Now we are into the 80’s full on.  And this might be the weakest era although I thought Bruce Kulick’s work on guitar was sensational throughout.  Gene was not really into it as he was so lost without the Make-Up and Paul was running the show to keep the band going and thankfully, he did just that.  The albums were Animalize, Asylum, Crazy Nights and Hot in the Shade.  It was only recently I finally started finding the 80’s album as for almost a year and a half, I could find nothing.

Then we get into the 90’s and the 2000’s.  They haven’t had a lot of studio albums during this time and I have all that I can find.  I don’t think Sonic Boom was released on vinyl in the States so I don’t have that one.  I am hoping when I go to Europe next Spring, I will find it somewhere.  I do have Revenge, Carnival of Souls, Pyscho Circus and Monster.

I also have from the 90’s, Kiss Alive III and Kiss Unplugged which brought Kiss back into the spotlight and started the Reunion Tour and the second make-up era. 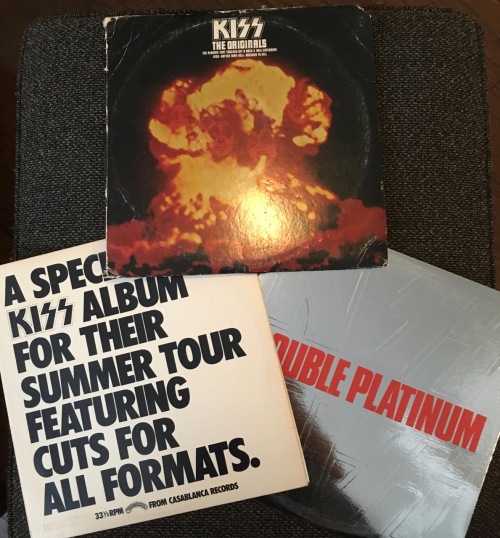 The only other items I have on vinyl are some singles whether 7″ or 12″.  I have on 12″ the Crazy, Crazy Nights single and then on 7″ I have Flaming Youth, Tears Are Falling and “I Was Made For Loving You”.  I will keep on the lookout for more and start grabbing these as I see them.  It was fun to have the singles.

That is everything on vinyl.  I do have some CDs, but not many as I gave most away, stupidly, years ago.  I have Kiss Rocks Vegas and several bootlegs.  The bootlegs are cool and I am going to look out for more of those.

And then there are Thrashes, Smashes & Hits, Kiss Symphony: Alive IV and Sonic Boom all on CD.

Oh yeah, I have some DVDs as well.  I have Kiss Symphony: Alive IV and the three DVD sets of Kissology (and I hear there will be a fourth and I can not wait for that one).

And there you have it.  My Kiss Kollection at this point in time.  I know there are a couple items I still need to get on vinyl like Kiss Destroyer Ressurected, Sonic Boom (whenever it becomes available), Thrashes Smashes & Hits among anything else that becomes available.  The madness won’t stop as I will start gathering everything else and try and become a completist with their collection.  I still want all the different greatest hits albums and the Kiss CD Box Set of rare songs.

I will update when I have collected a significant more number of items.  Thanks for hanging around and I hope you enjoyed my little journey.