Bryan Adams kicked off his North American Shine A Light tour in Charlotte, NC on May 4th, 2019 at the Charlotte Metro Credit Union Amphitheatre.  I am excited to say, I was there and witnessed a spectacular show and loved every minute of this 2 hour show and 28 song set.  At the tender age of 59, Bryan still rocks like he is 18 and I guess he will til he dies!!!

The night started out a little rough.  Thunderstorms and rain were pushing through Charlotte and I was wondering how wet I was going to get.  I arrived with only about 20 minutes to spare before the show started and had my poncho ready.  Just as Bryan took the stage some rain started to fall and the poncho went on (just like about 1/2 the crowd did as well).  By the end of the song, no rain…not one drop the rest of the evening.  Someone up above was looking out for us and for Bryan and his band.

Let’s talk about the show.  The opening act was none other than NO ONE!!  Bryan doesn’t need no stinking opening act.  Nope!  This was an evening with Bryan Adams and only Bryan (well, his band was there including the amazing Keith Scott, but more on him later).  The stage set-up was really simple. A big Video Screen that covered the entire back of the stage, a drum set on a small riser, a baby grand piano and keyboards and few guitar stands around the stage.  Add a small lighting set-up that was quite simple and that was it.

Bryan came to play music and have a good time and that is exactly what he did and a good time was had by all.  Now, do you want to see this monster setlist??  I am sure you do so here we go… 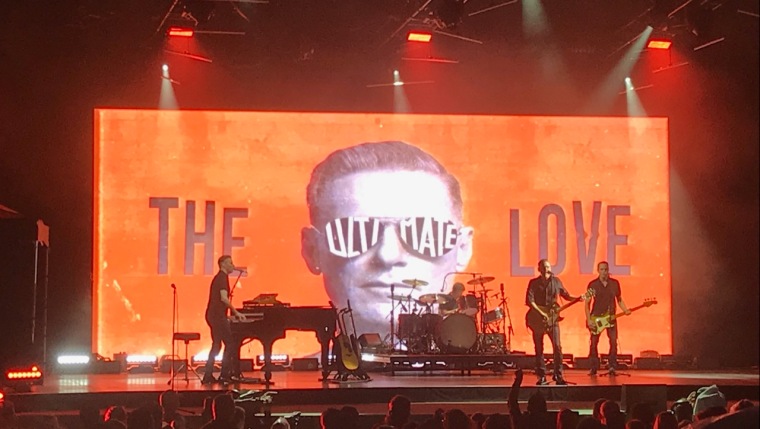 The night was full of hits and way too many to go through one by one, but I will touch on some of the memorable ones for me.  The first “Wow” moment was hearing the great Keith Scott hit that opening riff to “Run to You”.  Damn, that gave me chills.  I don’t know if I mentioned this earlier, but this is the first time I have seen Bryan live, so it was the first time I had heard any of these songs live.

Bryan’s crowd interaction was fantastic.  He also didn’t take shit from anyone.  Some lady in one of the front rows had a cowbell and was ringing it and let me tell you, it annoyed the shit out of Bryan.  He made a comment after the first or second song and by the end of “Go Down Rockin”, he had the cowbell confiscated…well, he made her throw it up on stage so know one had to hear it and the crowd loved it!!

The next great moment was “It’s Only Love” which is another classic song.  This version was totally cool because Keith Scott tour it up with a solo thrown in.  The man has still got it and one of the underrated guitarists in the business. 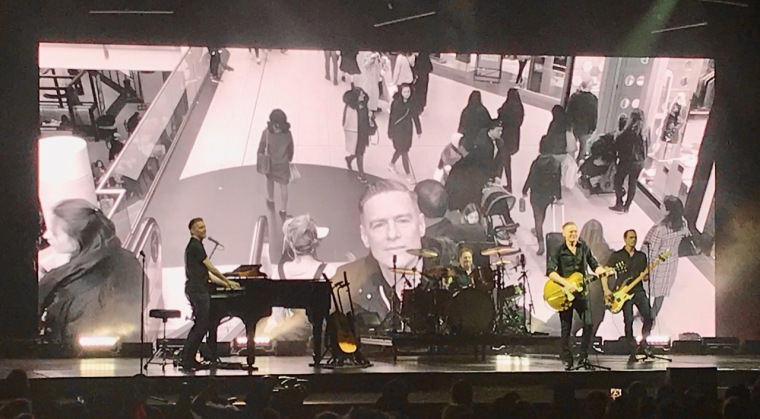 Now, when you go to a show, everyone has their phones out and taking pictures or videoing songs and in this case even texting.  After “Cloud 9”, Bryan started chastising a young lady about texting.  He asked if she was texting him, because he was right there in front of her and she could just tell him right to his face.  I think that annoyed him as well. But he kept it light and in jest.

There was just song after song as the list above shows.  He had a little acoustic set in the middle of the show with a couple songs and then started out the fan favorite  “(Everything I Do) I Do It For You” as acoustic before the full band joined back in to finish up the song and then it was hit after hit.  On “18 til I die”, the song talks about “I will be 18 going on 65” and he had to change it up to say “18 going on 60” as he is quickly approaching that milestone.  I hope he keeps touring to at least 65 so he can play this song.

Towards the end of the set, he took audience request of about 3 songs.  I don’t believe they were audience request completely because strangely one or two of those were audience request at his last show in Australia (and there was even video that went along with one of the songs). When he asked for requests, I screamed out “Diana”, however, he ignored me since they were already set.  Bryan, I call you out as you were planning on playing those songs all along!!  But I don’t care, I loved the ones he played whether he planned them or not.

The show ended and Bryan introduced his stellar band (they were tight) and then the left the stage.  Don’t be stressed because they came back and did an encore.  The first two songs were full band songs including a Clash cover of “I Fought the Law”.  The band left and Bryan pulled out the acoustic and ended with “Straight From the Heart”, a little reprise of “Shine the Light” while everyone lit up their phones and then ended with “All For Love” and it was nice quiet way to end a great night of music.

What a great night and great show to kick off the tour.  If you haven’t seen him lately or at all, Bryan has still got it and delivers a non-stop 2 hours of memories and music.  Thanks Mr. Adams for a memorable night of songs.  Until next time!!

Oh yeah, I supported Bryan with more than a concert ticket, I also bought a shirt. 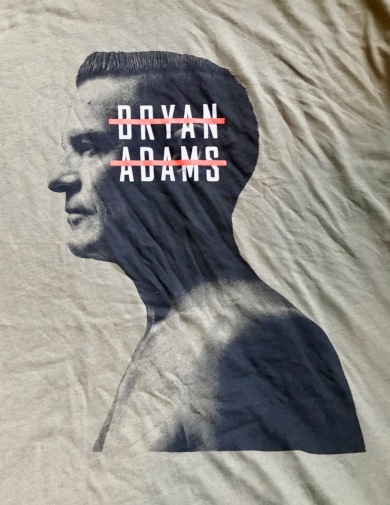