By the early 90’s Stryper was in a bit of turmoil.  Their last studio album didn’t do well mainly due to the band abandoning their yellow/black theme and moving away from their Christian roots.  For the record, the album was called ‘Against the Law’ and I think it is one of their best albums…but what do I know.  They released a greatest hits album with a couple new songs, but Michael Sweet, the lead singer, was unhappy with the musical direction and decided to leave the band for a solo career.  This was February 1992.  Stryper as we knew it were done (at least at this point in time, we know better now, but that is another story).

Michael recorded an E.P. called ‘Unstryped’ that was supposedly songs that were originally recorded for Stryper.  That disc didn’t see the light of day until 1999 though.  In the meantime, he went on to record his first full length solo album simply called Michael Sweet.  Now, with the re-release of the album on vinyl, the album now seems to be called ‘1994’…sorry but it is ‘Michael Sweet’…that is the title.  Here is the original album cover…

The album brought Michael back to singing Christian based songs again and he kept to the fashion of what Stryper was originally.  There is no denying that is Michael when you here the vocals as his voice is unmistakeable.  When this was released in 1994, the musical landscape had changed significantly and my musical habits were not what they used to be.  I wasn’t totally in to the whole Grunge sound and my musical offerings at this time were limited.  When I discovered this was out, I ran to my local Christian book store and grabbed a copy. 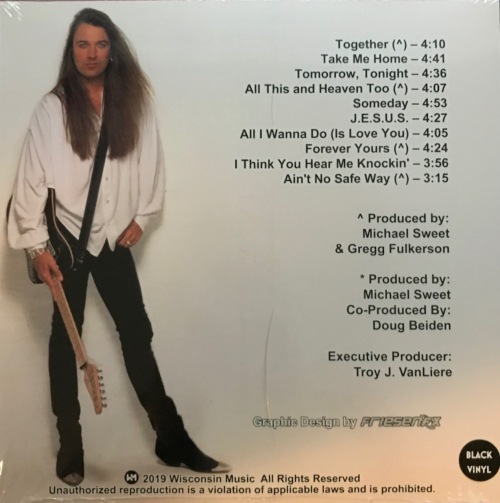 I devoured this album from beginning to end over and over as I needed that uplift and those messages more than I realized.  The songs are fun and rocking, there are ballads and they all fit nicely together making it an enjoyable music experience.  And this was 1994, the music was depressing, sad and awful.  This was the shining light. 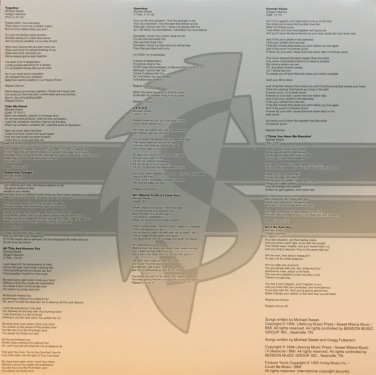 Well, back in November of 2019, sometime last decade, Michael announced a re-issue of the album on vinyl and since I am big in to collecting said vinyl, I grabbed a copy.  I did something unusual this time.  Although Michael was offering different color variations and autographs, I actually went the black vinyl route this time which is unusual for me.  Maybe my “Vault” purchase had a lot to do with going the cheaper route.

Anyway, let’s get to the songs… 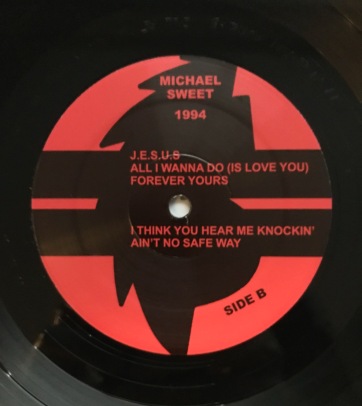 Songs like “Together”, “Take Me Home”, “J.E.S.U.S.” and “Ain’t No Safe Way” kept me rocking. “Together” & “Take Me Home” kick off the album and are both have that 80’s rock vibe that help make this album feel like home as that is what I grew up on.  “J.E.S.U.S” comes out swinging with some heavy guitars and pounding drums and it will teach you how to spell Jesus!!  Rock and Education together, can’t beat that. This song is probably my favorite of the whole bunch.  With the help of Greg Fulkerson (Blue Tears) in writing, producing and guitar playing you get some great rockers including “All This And Heaven Too” and “Ain’t No Safe Way”.

And as far as ballads go, wow!  Michael nailed it with these offerings. Most especially I really enjoy “Tomorrow, Tonight” as it includes some saxophone that just turns the song sexy and makes it a great love song.  Can a Christian song  by sexy?  Well, this one is.  Then you get the piano filled “Someday” which is a little over the top at times, but those emotionally filled vocals and his tone are what save it.  And it has a great guitar solo played by Michael who is a very underrated guitarists if you didn’t know.  He is a beast on guitar, don’t let those vocal chops fool you.  And the last ballad is “Forever Yours” which is an acoustic wonder that has Michael’s vocals on full display.

The debut and self-titled solo album from Michael Sweet is still my favorite of all his solo work and is for two reasons.  One, the songs obviously.  Two, it was my reintroduction to him and Stryper after the band went on hiatus.  This was really the album that turned me back on and has made me a life long fan so it has a very emotional connection to me especially since it came in to my life at a time when I needed these messages.  For me this is a 5.0 out of 5.0 Stars.  This kind of music might not be everyone’s cup of tea as he does mention God and Jesus, but if you can listen to it for its musicality and Michael Sweet’s vocals, you will be in for a treat.

And check out the Michael Sweet Album Rankings to see where the others ranked since you already know this is my favorite.