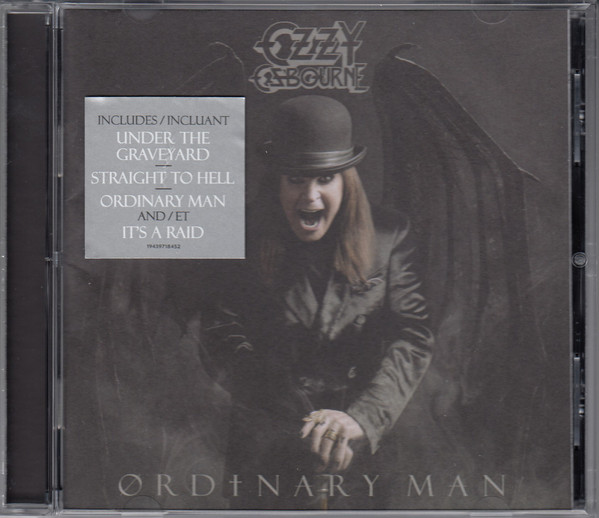 It has been 10 years since Ozzy’s last studio album and yet somehow, the man is still relevant.  How relevant, so relevant in fact that Post Malone had him guest on one of his songs. So there is a whole new generation of people discovering Ozzy.  And better late than never.

With the sad news of Ozzy’s Parkinson diagnosis and hearing that Post Malone song, I thought I would give this album a try as I figured it might be his last (thankfully, it isn’t as he is already working on another).  To my surprise, I was completely blown away by this album.  The album is full of hooks, melodies, great guitar solos and Ozzy hasn’t sounded better.  The album is so accessible and harkens back for me to ‘The Ultimate Sin’ in catchiness and how radio friendly it is.  Some fans might not like that, but I couldn’t be happier.

The guests on this album are immense.  The main rhythm section is Duff McKagan on bass (GNR) and Chad Smith on drums (Red Hot Chili Peppers), but that isn’t all.  You get Slash, Tom Morello, Elton John, Charlie Puth, Post Malone, Travis Scott, Andrew Watt and even daughter Kelly Osbourne on backing vocals.  A mix of old and new with the musicians and it comes across in the music.

The first two singles also made me want to hear this.  I loved “Under the Graveyard” and “Straight to Hell”.  Both heavy songs with some killer guitar work with Slash on “Straight to Hell” and Charlie Puth is on keyboards for that one which is so unexpected.  And Andrew Watt on “Under the Graveyard” and his playing on most of the songs is sensational.

Tom Morello’s playing on “Scary Little Men” and the punk sounding “It’s a Raid” is takes it to another level.  And both those songs are so different where “Scary Little Men” is a fun rocker; “It’s a Raid” will lay you to waste as it is so intense and frenetic that you will lose your shit.  And with Post Malone a part of it, you get even more people to discover Ozzy.  I also loved that they through in the Post Malone song “Take What You Want” which also features Ozzy and Travis Scott.  Now any Ozzy collector doesn’t have to buy the Post album just to get it.

The songs sound so evil at times and a heaviness that is what Ozzy is known for.  There are some heavy songs such as “Goodbye” with some great tempo changes and I think the song “All My Life” is also a favorite as well as it has a power ballad feel and I think Ozzy sounds really great.  The best ballad he has done in a long while.

But there are missteps as well with the Elton John song “Ordinary Man” is one of my least favorite. It is flat out boring and I found myself not caring at all about it.  The other one is “Holy for Tonight” as it lacks any kind of bite.  Outside of that you can’t go wrong.

The track score is 9 out 11 tracks or 82% which is fantastic.  As I said earlier, the album is dark, heavy and yet full of melodies, hooks and some killer guitar work.  Ozzy sounds great and fresh in what could be the best thing he has done in 30 years (for me at least).  If you are on the fence with this one, get off that fence and go check this out. You won’t be disappointed.  My overall score is a 4.5 out 5.0 Stars as I was completely blown away and will be listening to this one a lot this year and longer.

Now, if you want to read a better review go check out my buddy Deke’s review at Thunder Bay Arena Rock.