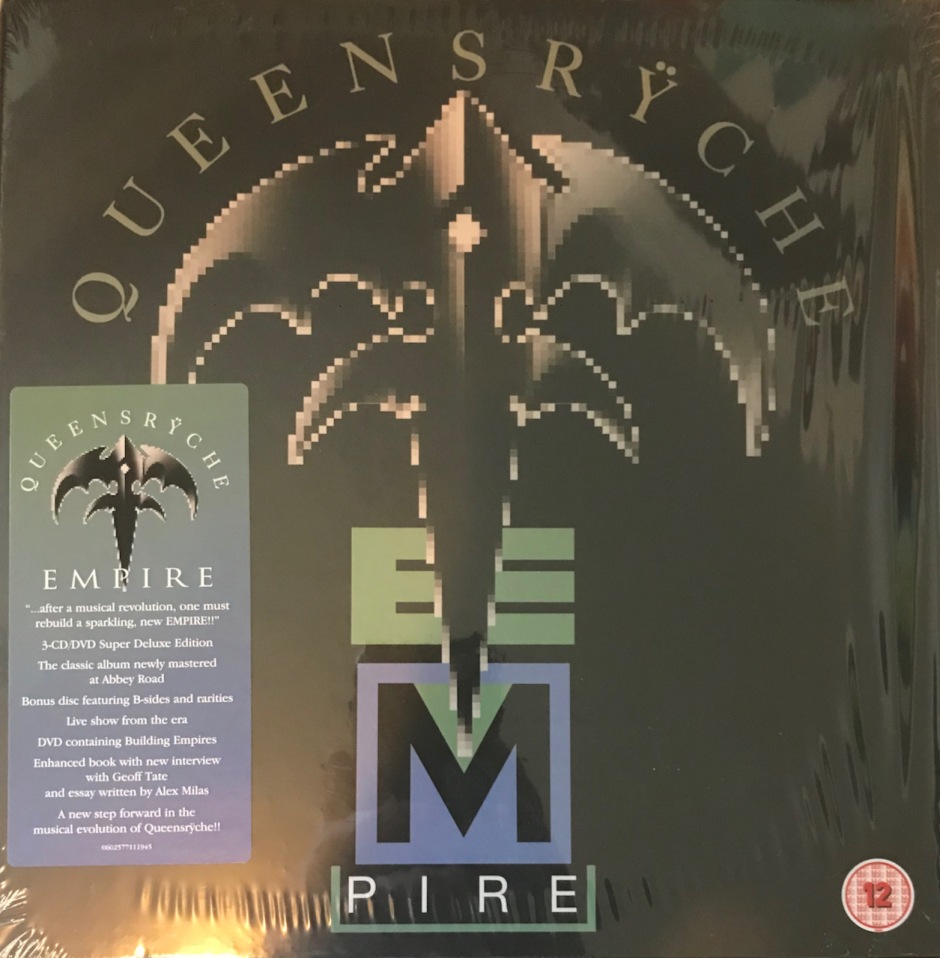 After the band’s revolutionary album ‘Operation: Mindcrime’, Queensryche delivered another masterpiece with the album ‘Empire’. The band is celebrating this album with a Super Deluxe Edition Box Set and it is full or wonderful things. You get 3 CDs, 1 DVD and a book all included in a wonderful and sturdy box. It looks like a lot of time was spent on the packaging. And if you look at the back cover, it tells you everything you are going to get, but maybe it is overstating things a little and I will get to that later.

Just look at all the stuff you get. You get a remastered album, ‘Concealed Empire – Bonus Tracks’, ‘Live at Hammersmith Odeon, London 11-14-90’ and a DVD called ‘Building Empires’. If that isn’t enough you get a hardback book with lot of wonderful goodies inside. Let’s not waste anytime and get right into it.

The 3 CDs / 1 DVD come housed in a cardboard foldout that houses each disc in a slot with the DVD getting its own packaging as well. And if you were smart, you would pull each disc out and place them in to their own jewel slim case so they don’t get scratched up…at least that is what Aaron would do over at keepsmealive.wordpress.com.

The first CD is the remastered album ‘Empire’ and what an amazing piece of work by the band. So many great songs including “Best I Can’, “Empire”, “Jet City Woman”, “Another Rainy Night (Without You)”, “Anybody Listening?” and their massive hit “Silent Lucidity”. The album was originally released way back on August 20, 1990, over 30 years ago. This remaster is spectacular and you can hear everything so crisp and clear. I don’t know how many times I’ve listened to it over and over.

Let’s be honest, if you bought this box set, you didn’t buy it for the remastered disc (or maybe you did) but you bought it for the bonus material and the live album. Disc 2 is the bonus material and I would say this is a better disc than what we got for the ‘Operation: Mindcrime’ Box Set. There are 9 tracks including B-Sides, Single Edits and Radio Edits. Now, if you bought all the singles you have all of these in some form, but if not they are all here in one place. The best stuff on here are the B-Sides which the best one is “Last Time in Paris”, man I love that song. I always think of my trip to Paris now when I hear this. A couple other great tracks to get are the traditional English ballad “Scarborough Fair”, “Dirty Lil’ Secret”, “I Dream in Infrared (Acoustic)” and “Phrophecy (Live in Tokyo)”. And yes, I did misspell that as it is actually that way on the back cover of the Box Set. Oops, someone screwed up the editing process there. It is all great stuff.

The 3rd and final CD is Queensryche Live at Hammersmith Odeon back in London on November 15, 1990. This disc had been released before back on their 20th Anniversary Edition released back in 2010, but I didn’t have that so this works out for me. Unlike the ‘Operation: Mindcrime’ Box Set you get a live show and not just the album songs being played live. Which isn’t bad for the prior box set, but I would’ve loved a full show and not just the album cuts. So, here you get some old songs with “Walk in the Shadows” and “Take Hold of the Flame” as well as “Road to Madness”, but you do get a ton of songs from ‘Empire’ and thankfully, they left off the Mindcrime songs since we got those with the last box set. It is a short show at only 10 tracks, but they are all solid and a great listen.

Building Empires was also released prior to this box set so you aren’t really getting anything you couldn’t have before but since I only had the main album, this set is perfect to have everything together in one. And this DVD is great. You get some really old videos that are almost laughable at their costumes (stage outfits). Oh man, are they dated. The songs “Nightrider” and “Prophecy” are still great to watch. You get “Gonna Get Close to You” from Rage for Order and a previous unreleased version of “Eyes of a Stranger” from Mindcrime. Then you get a bunch of music videos from Empire and a couple live performances as well. And on the sleeve for the DVD there is another error as it lists the songs “I Will Remember” and “Della Brown” both from the MTV Unplugged show, but the back cover of the box set does not and the DVD doesn’t actually have them…at least I couldn’t find them. Oops…they did it again!

The last thing you get is a hardback book with 40 pages of pictures and lyrics. You also get a new interview with Geoff Tate as well as an essay on Empire from Alex Milas. The pictures are wonderful, the interview is great and so is the essay. I nice added touch to throw in the package to make it complete. I am not going to tell you about the essay or the interview as that you can read for yourself after you get the set. But for now, here are some snapshots of the book…

And there you have it. It is another beautiful set from Queensryche, but most of this stuff I believe had been released prior in some form or fashion. Luckily for me, I didn’t have it so it is nice to have it all compiled in one complete set. I do wish there was a full live show as I don’t believe the Hammersmith is one or at the very least, it should’ve been a previous unreleased show. That is a big miss. I also would’ve liked some demos like Whitesnake does, but maybe they don’t exist, but it still would’ve been cool. I don’t really have any true negatives outside of those nitpicky things. Well, except for the editing errors on the back of the box and the DVD sleeve. Those are sort of stupid errors. The book was very well done, the remastering was great and that Hammersmith show was fantastic and I loved the B-Sides all in one place and for that, I will give it a 4.5 Out of 5.0 Stars only being dinged for the stupid edit issues (their editor should be fired). If you are a fan, this is worth grabbing and upgrading the version you already have, I am sure.

Thanks for hanging around.