You, my reader, are going to pick an album for me to review each month.  It is really simple…first, I will give you 5 albums to choose from and second, you will tell me which one of those you would like to see reviewed on the site.  See…simple!

There are a few simple rules I have put in to place in my selections.  They are…

What are the 5 albums you ask?  Funny you should ask because I have those right here…

Never Heard Before – The Sex Pistols – ‘Never Mind the Bollocks’

From My Collection – Black Sabbath – ‘Paranoid’

From My Collection – Twisted Sister – ‘Under the Blade’

Let me know which one you would like to see and sometime in August, I will post a review of the album that gets the most votes. You have one week to decide and from there I will start listening to the album and do a review.

First off, November does not have the amount of Purchases as October had as October was an anomaly…which I actually bought the album “Anomaly” by Ace Frehley last month so it was a double anomaly, if that is possible.  November was a more normal month of purchases.  And I am thankful for that. I am thankful for a lot of things.  Oh, and by the way…Happy Thanksgiving!!

I started off the month going back to Noble Records over in Matthews, NC.  They have been open for two months and I have been twice.  I think a regular monthly stop is what I should do and is what I am going to do.  As usual with Noble (even on his Pop-Up stores), I always walk away with some fantastic stuff and this trip was no different. This time, I only walked away with 3 Vinyl and they are great stuff.  They are all 80’s releases and actual 80’s vinyl, not re-issues.  And there are NO TURKEYS in this bunch. (Sorry bad Thanksgiving joke!!!)

First up is the debut album from the band Twisted Sister.  The album is ‘Under the Blade’ and it is the Italian release of the album by Secret Records.  It is also the original mix of the album and not the re-mixed version Atlantic Records released which I didn’t realize when I bought so thank’s to Scott at HMO for that information.

The 2nd LP was the debut from the band Skid Row simply called Skid Row.  You know this one. It has “Piece of Me”, “I Remember You”, “18 and Life” as well as “Youth Gone Wild”.  It is a beast of a debut and it isn’t a first pressing, but it is the Columbia House Record Club version.  Remember that, for just $.01 you get like a bajillion albums if you buy 500 within two years…something like that.  It is mint shape and still has the plastic wrapper on it.

The last one from Noble is Europe’s ‘Final Countdown’ album.  I am so sick of the song “Final Countdown”, that I had put off buying this one for years.  Well, Noble had one in one of the best shapes I have seen and at a decent price.  Also, still in the plastic wrapping.  So, I finally bit the bullet and added to the collection.  I am up to 5 vinyl releases for Europe and still a few more to go.

Next up is one I finally grabbed from my WishList on Amazon.  I keep a list of albums I am looking to obtain and if the price ever gets right, I grab it.  This one I grabbed because it is a new release and it fell below my $15 threshold.  It actually wound up being only $14 for a 2LP set.  It is not my favorite Billy Idol album which is why I was waiting to grab it at the right price. It is his latest Re-Mix album Re-Vitalized.  I needed it to help complete my Billy Idol collection.  Still need a few more though before I am done.

And then next up was a Record Show at the Fillmore here in Charlotte…at least I thought it was a record show.  It turns out it was market for mostly vintage clothing and jewelry.  Dang it!  I saw it advertised by Hardy Boy Records and Comics who have a shop over in Mint Hill so I thought it was going to be this huge record show. Wrong.  However, I wasn’t disappointed as I picked up a ton of stuff from the Hardy Boy’s booth as he never disappoints. If you are in or around Charlotte check out the shop at11237 Lawyers Rd in Mint Hill, NC.

Let’s start with the some Motley Crue.  I found The Dirt still sealed for $16.  I have avoided buying it because it is usually over $20 and I don’t like the new songs that much, but I figured for that price why not.  I also found a 12″ Picture Disc of Helter Skelter with the poster…Really cool…

Next up is a classic Punk record I have been wanting for a while and finally found one in good shape at a good price.  It is The Clash’s ‘London Calling’.

Then a couple really interesting pieces.  First up is an album I already have called ‘Love at First Sting” by the Scorpions…I don’t have it with this cover though!!  And for $6…sold!

Next is one that is a round album cover with a blue vinyl which is really strange because yellow and black would have made more sense for an album color since the album is Stryper’s ‘Yellow and Black Attack’. 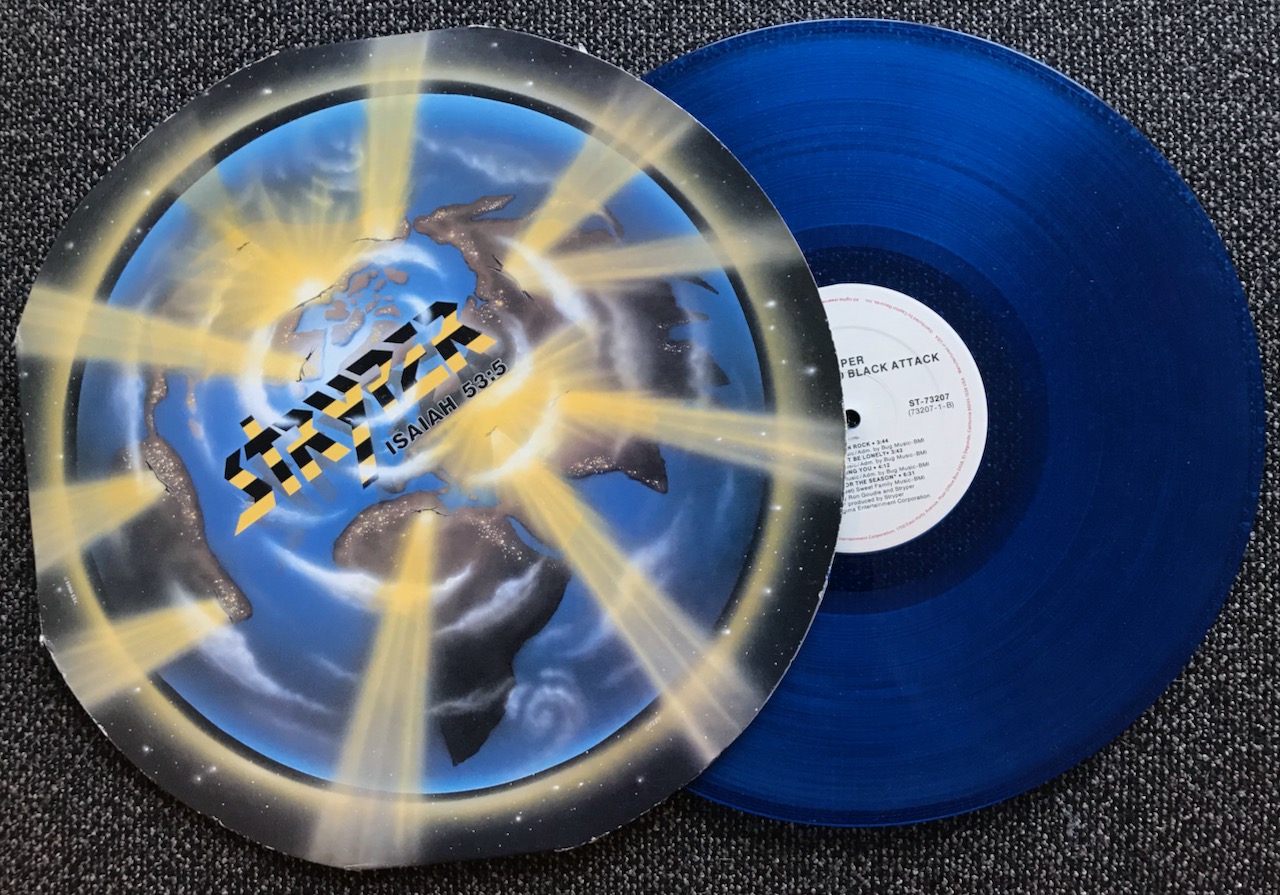 And lastly is an album I have rarely seen it and it is usually north of $75.  This one was $15 all because someone named Lori wrote her name on the album cover.  Thanks Lori for saving me at least $60.  It is Kiss – ‘Smashes, Thrashes & Hits’.

And that is it!  Sorry, no CD purchases this month.  Maybe next month!

Since I don’t post on Saturday, generally and tomorrow is a New Release Friday, I am doing my Purchase Summary today.  Which means, if I grab anything tomorrow for Record Store Day Black Friday, it will be in the December Summary.  I hope that is okay to have purchases from the wrong month included.  Don’t sue me, I am giving you a disclaimer with plenty of advance notice.