Pat Benatar had been around for almost 10 years by the time I got around to buying my first Pay Benatar album.  I had seen her videos and heard a lot of songs on the radio, but I had never bought an album.  That changed in 1988 with the release of one song…”All Fired Up”.

That was the song that did it for me.  I heard that song and finally decided to go out and buy the CD.  The album ‘Wide Awake in Dreamland” was My First Time with Pat Benatar.

Pat Benatar has one of the finest voices ever in Rock music, but for some reason I always hesitated buying her stuff.  There is no one out there with her octave range or her talent. This album showed me that she was untouchable when it came to vocals.  It was this album that caused me to go back and get her entire collection over the next few years.

I was out at the record store a month back and came across this album and had to have it on vinyl.  The cool thing about the album I found was that it was a “Promotional Only” album and not supposed to be available for resale.

I now have 4 of her albums on vinyl including this one. The others are “Crimes of Passion”, “Precious Time” and “Get Nervous”.  There are still a few more of hers that I have to get and hopefully will be able to find them.

Now a little about this album.  The Track Listing is as follows: 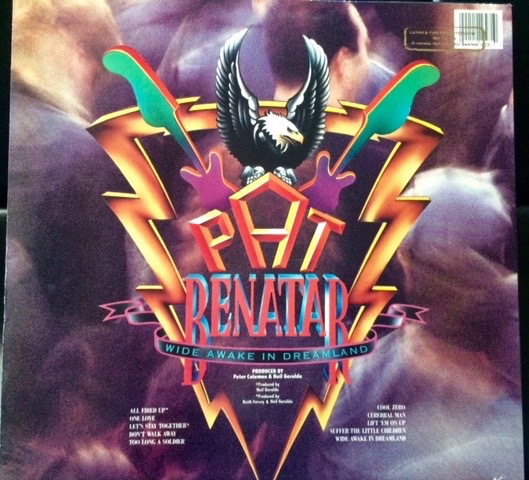 The opening track, “All Fired Up”, is one of my all time favorite Pat songs.  It is pure energy and a great hard rock song.  It is perfect for the opening track and shows off how much a rocker she is.

The second track on the album was “One Love” which was a much slower song.  It was a pretty ballad and really showcases her voice.  I love the variety she puts on her albums as it give you a range of styles and sounds that there is always something you will like.

“Let’s Stay Together” brings the album roaring back and bring some nice guitar rock.  Pat’s lead guitar player and husband, Neil Giraldo, shows what a fine guitarist he is and actually what a great band they have put together.  Pat & Neil are a great pair.

The fourth song was another single (actually all of the first four songs were singles).  “Don’t Walk Away” was a mid tempo song and although a great song it did not do as well as “All Fired Up”.  Pat’s voice sounds sensational on this song as well and proves even further she can sing. 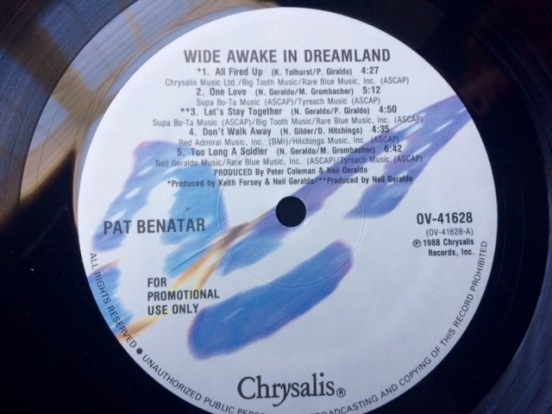 The album wasn’t perfect, but it had enough meat on it keep hitting repeat.  Winding down the first half was “Too Long A Soldier” which was an okay song, but not one of the best.

The second half of the album also had some great tracks starting with the guitar heavy “Cool Zero” where Neil and company just got town.  It is another great rocker.  “Cerebral Man” was one of only two songs that Pat or Neil didn’t have a hand in writing.  The other song was “Don’t Walk Away”.  It was very different from the rest of the album, but not in a bad way.  She still connects with the song vocally and is a nice piece.

“Life ‘Em On Up” comes up next and doesn’t work for me as much as the others.  It didn’t offer anything up new and exciting.  Then she goes into a “Hell Is For Children” style song that talks about trouble children call “Suffer the Little Children”.  It is a great and moving song.  Pat really shines on these songs that she is so emotionally connected to.  It is not as great as “Hell is For Children”, but it is great nonetheless.

The album ends with a bang as well with the title track “Wide Awake in Dreamland”.  It is an upbeat rock song which ends the album the same way it started.  It is the highlight of the side b and it made me flip over the album and start again.

I had a blast reexamining the album as it had been awhile since I had listened to it from beginning to end.  It is one of my favorites by her because it is My First.  And you always remember your first and always hold a special place in you heart as well.  If you have never listened to this, give it a try and start exploring the world of Pat Benatar.  Until next month’s “My First Time”, enjoy this one.