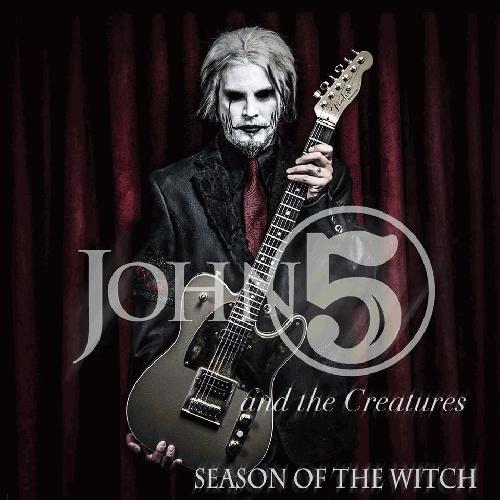 John 5 is one of my favorite guitarists and there isn’t much of his work I don’t have.  I came across him while listening to Rob Zombie and from that point I was hooked.  I now have all his solo albums and a lot of his work with Marilyn Manson and of course, all his Rob Zombie albums.

He has done so much more with guest spots on so many albums including a couple on Ace Frehley’s last album, ‘Origins, Vol. 1’.  His real name is John William Lowery, but goes by John 5 thanks in large part to the stage name given to him while working with Marilyn Manson.  The name stuck and he has used it ever since.

He is now on his 8th solo album and this one is entitled ‘Season of the Witch’.  The darkness, morbid sound he had with both Rob & Marilyn is still prevalent on this album as well.  Once you are in the darkness, it must be hard to get out…however, you don’t want him to get out.  This is his speciality.

His band The Creatures consists of Ian Ross and Rodger Carter and together these 3 musicians take you on a nightmarish musical journey that is ‘Season of the Witch’.  The 13 track instrumental album takes you from metal all the way to evil bluegrass.  Strap yourself in and be prepared for the terror of John 5 & the Creatures.

The album kicks off with “The Book of Spells”.  The short track is right out of a Zombie album.  It is slow build up of drums and eerie sounds that prepares you for the first real track of “The Black Grass Plague”.  “The Black Grass Plague” kicks in with a drums that pound throughout and John 5’s is completely shredding on the guitar.  His fingers flying fast as lightning and furiously on the strings.  The song switches with some great bass work and then it up and ends with some great banjo and a bluegrass sound.  Since his themes are dark and scary, bluegrass is now “blackgrass”.  John 5 loves to play country/bluegrass and it is apparent throughout the album.

The amazing guitar work doesn’t stop as it flows into the next song “Guitars, Tits & Monsters”.  Now funny thing for me when I was listening to this in the car, the comma after Guitars was missing so it showed as Guitar Tits & Monster and I thought, I didn’t know that guitars had tits and if I did I would have really learned how to play (okay, maybe not that funny but I was tired of sitting in traffic and I found it funny).  The song is almost 6 minutes long, but does not feel like it.  The masterful work they all do makes this a highlight on the album and one of my favorites.

Another of my favorite songs is up next, “Now Fear This”.  The song was very Satriani like in its style and sound. It had a great guitar riff and felt like the guitar was doing the singing at times.  Joe Satriani is my favorite guitarist, so that made this song work great for me.

One of the two songs I didn’t care for followed “Now Fear This” and it has a great title, but the country sound does blend well for me with the overall feel of the album.  The song is “Behind the Nut Love”.  Like a said, great song title.  The song meanders along and feels out of place.

We are back to the evil with “Making Monsters”.  The song starts off with some screaming and old style TV horror sounds and music.  It is really great.  The song then kicks in with another great guitar riff and then John 5’s flying finger work.  His speed is amazing and this song keeps keeps screaming on and never slows down.

The short interlude “Dr. Evil’s Spookshow” is a carnival barker inviting you into the creep show.  The only problem with this is the name Dr. Evil.  Ever since the Austin Powers movies, Dr. Evil isn’t really scary or evil so the name doesn’t ever bring on the fear in me.

“Here’s to the Crazy Ones” is yet another great track.  This song changes things up constantly and all three members of the band shine.  The song feels all over the place, but it is also what makes it work.  The one guitar riff that keeps popping up is what holds it all together.

“The Macabre” is a slow instrumental with a soft yet eerie feel to it.  The fly’s buzzing in the background give the affect of being around a dead body.  A nice and short piece.

“Ddd” is John 5 at his best and only John 5.  What you get is a basically a concert solo where John 5 shows off and gives you every trick in the book.  Sit back and listen with amazement of the talent he is.

Next up is “Hell Haw I.G.R.”.  It is another country sounding song doesn’t work for me like the other country song.  I do like the title of “Hell Haw”, but like the last song, it feels out of place.  If he wanted to do a whole country album, I would buy it, but mixed in with the rock isn’t my cup of tea and I could do without.

“Ode to Jasper” is another slow song and short at under 2 minutes.  It is quite beautiful and very simple.  A nice touch to the album.

Lastly and definitely not least, “Season of the Witch” ends the album in full glory.  The best song on the album has been saved for last.  The song is creepy with the opening bass lines and the guitar riff is heavy and killer.  The song is a complete rocker and now one of my favorite John 5 songs ever.  A perfect way to end and keep you wanting more.

10 keepers out 12 songs – 83% (4.2 out 5 stars) I am not counting “Dr. Evil’s Spookshow” for or against the album as it is just an interlude so that is why there are only 12 tracks in my scoring.  The album is already one of my favorites for the year.  A lot of the rock albums so far haven’t been killing it with me, but this one was a breath of fresh air.  I can never get enough of John 5 so it was nice to have some new music in between Rob Zombie albums.  This is a must have for any rock fan and especially a John 5 fan.