One thing I couldn’t believe was intact in the album was a set of trading cards that were still a part of the sheet it came on.  She had never taken them out.  Amazing.

Today, Leif was still going strong in the early 200’s.  He released a couple of albums and continued acting, but sadly the drug problem would rise again and lead to arrests and rehab stays.  Someday, maybe he will get clean.  Here is a picture of him from last year. 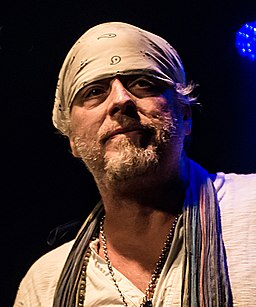 Next up we have one of the younger brother of the Bee Gees, Andy Gibb.  My wife had his 2nd album as well called ‘Shadow Dancing’.  It was the follow-up to platinum selling debut, ‘Flowing Rivers’.  ‘Shadow Dancing’ was huge as well also going Platinum and spawned the #1 song “Shadow Dancing”.  Other hits from the album were “An Everlasting Love” (#5) and “(Our Love) Throw It All Away” (#8).

After his 3rd album, ‘After Dark’, he lost favor in the spotlight and his career declined as his drug addiction increased.  He went through rehab and was set to record a new album and hopefully revitalize his career when he died of myocarditis, an inflammation of the heart muscle caused by a recent viral infection and most importantly impacted from his years of cocaine abuse.  His is a very sad, but all too common story in the music business.

Included in the album was a sheet where you could order Andy Gibb merchandise.  I wonder if the addressed and phone numbers still work.  Maybe I should order something and see.

Now, who is the one teen idol my wife loved…well Shaun Cassidy of course.  She not one, not two, but three Cassidy albums.  I didn’t even know he had three.  Shaun Cassidy was known for his music and TV career where he starred in The Hardy Boy Mysteries with Parker Stevens as well as Breaking Away.  But my wife also really loved his music.

The first album she had was his self titled debut, ‘Shaun Cassidy’ from 1977 (1976 in Australia).  This is the album that spawned the classic song “Da Doo Ron Ron”.  The song went #1 and was the highest he would reach on the charts.  The song has a writing credit to the great Phil Spector (well he was great until he went nuts and murdered actress Lana Clarkson in 2003).

The next single off the album was “That’s Rock & Roll” which went as high as #3.  The song was written by Eric Carmen who had such hits as “All By Myself” and “Hungry Eyes”.

The second album was ‘Born Late’ which came out in 1977.  The album gave us another Eric Carmen penned song “Hey Deanie” which hit #7 on the charts as well as a remake of The Lovin’ Spoonfuls song “Do You Believe in Magic”.  The song wasn’t as big as it only reached #31 on the charts.

One thing different on this album then his first is that Shaun Cassidy actually has co-writing credits on about half the songs.  The album did peak at #6 on the Billboard Top 200 charts which is pretty impressive.  The album jacket was nice as it folded out and gave us a great picture of him as little boy on the piano.

The final album in my wife’s Shaun Cassidy collection is ‘Under Wraps’.  The album was released in 1978 and did not perform as well as his previous albums.  It peaked at #33 on the Top 200 charts.  There was no real hit single either as the main single, “Our Night” only #80.

There are a couple of interesting things on the album, to me at least.  First, is the song “It’s Like Heaven” was actually co-written by the Beach Boy himself, Brian Wilson.  The second cool things is that one of the background singers was Bobby Kimball from a little known band called Toto.

And there you have it.  The 70’s Teen Idol albums that I have in my collection thanks to my lovely and beautiful wife.  I am not sure I will ever pick them out and give a listen, but I guess you never know.