I recently read an article on Mike Tramp that said he was releasing a limited edition box set called “This and That” which would contain 5 CDs and 1 DVD of previously unreleased material as well as some new tracks.  It sounds interesting and got me to thinking about his old band White Lion.  And I immediately remembered ‘Pride’.

Little did I know at the time that ‘Pride’ was not their debut album.  They actually had an album prior called ‘Fight to Survive’ that never amounted to anything.  Since “My First Time” is supposed to be the first time I discover a band and it is not on their debut album, then ‘Pride’ worked.

‘Pride’ came out in 1987 slap dab in the middle of the Hair Band explosion.  That means BIG HAIR!!  Did White Lion have it…uh…YES…

The band consisted of the following members: 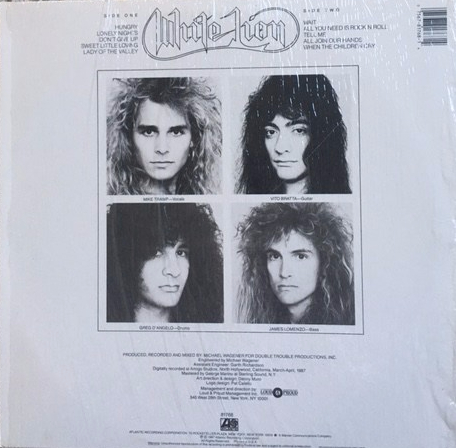 Mike Tramp and Vito Bratta did all the song writing and their connection together was at their strongest on this album.  They put together a stand-out album in a year full of stand out albums from Def Leppard, Guns ‘N Roses and Whitesnake.  The album produced four singles which strangely enough all come from Side Two.  How many albums do you know where none of the hits were not on Side One?  I can’t think of any off the top of my head.  The album went on to sell over 2 million copies in the U.S. alone and had 3 Top 10 songs.  It also reached #11 on the Billboard charts and it stayed on the charts for a full year…pretty impressive.

The album opens with a classic 80’s sounding song called “Hungry”. It is a screaming opener and Vito’s guitar work is exceptional.  Lets go ahead and put it out there, Vito kicks ass.  His guitar work throughout this album is exceptional.  It is sad that he has stayed away from music for so long, but from what I understand he injured his hand and finds it painful to play electric guitar anymore.  Tragic.

Sorry, now back to the song.  “Hungry” has the lyrical content of a Kiss song…what do I mean?

You would swear with lyrics like this, Gene Simmons must have been involved or Kiss was a huge influence on the band.  The song is obviously about sex and definitely fits with the time as most songs were about this topic.

“Lonely Nights” is another great song and keeps the album going at full speed.  This song tells the story of a girl whose boyfriend is with another and she is out searching for someone to hold her.  It is a sad song lyrically, but done as a full on rock song.

“Sweet Little Loving” is about a very promiscuous young lady and all the boys know it.  It is a fun, catchy song and not much to the lyrics, but they make the song work.  It is pure 80’s and Vito bring another solid guitar solo.

The final song on Side One is probably one of the best on the album.  At 6:38, it is an epic performance.  “Lady of the Valley” is about the loss of someone’s brother in war.  His loss is so tragic that he takes his brother and lays him at the feet of the Lady of the Valley in hopes she will bring him back. I have looked who the lady of the valley might be and I think it is the Virgin Mary.  I could be wrong, but that is what I gleamed from my Google searches.  The song is absolutely brilliant and definitely a highlight on the album. 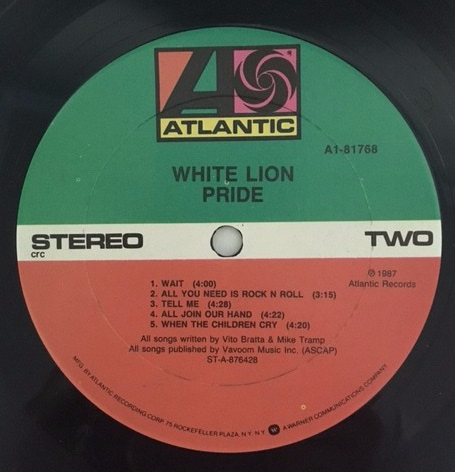 The first single off the album is one of the most popular songs called “Wait”.  The song was released in June 1987 and it took 7 months before it actually charted thanks in large part to MTV finally playing it in heavy rotation.  When it finally charted in February of 1988, it stayed on the chart for quite a long time and peaked at #8 in May.  The song is a great power ballad and tells the story of someone suddenly taken away from you or who has left you and it is that loss is so sudden that you can’t take it.  You feel cheated that you never had enough time to actually love them. One of the best ballads of the year and yet another great solo by Vito…have I said enough how awesome he is???

The next track was their attempt at a great Rock Anthem with “All You Need is Rock N Roll”.  The song was their fourth single and it starts out with a rowdy crowd doing a little blues thing going before it kicks into the song.  I actually like the opening better than the song itself.  Although it was a valiant effort, it is really lacking in that catchy feel a good anthem should have…that’s it, that’s all.

The second single off the album was “Tell Me”.  Another great one as well.  The story of a couple whose parents don’t approve so they run away together and I guess they end up happily ever after.  A typical 80’s track which is fine cause it works and it still works today as I still like this track.

“All Join Our Hands” is the next track.  There is a cool error on this song.  The album actually says ‘Hand’ not ‘Hands” while the album sleeve and the back cover say “Hands”.  Definitely an over site on someone’s part.  I actually don’t like this song.  They do write some socially conscious songs, some work, some don’t.  This is the don’t side for me.  Lyrically, it is overly cheesy for my tastes.

The final song is probably their most famous of all time, “When the Children Cry”.  This ballad went all the way to #3 on the Billboard Hot 100.  It was another socially conscious song about how we are screwing up the world and the impact it was having on our children.  Actually, this probably still applies today as I watch the news I think we are still screwing up the world.  The great part of the song is that they did it acoustically which is different than any other ballad they had on the album.  It brought so much more emotion and heart to the song which is why people fell in love back in the day.

There you have another of the “My First Time” albums.  If you haven’t heard this album, give it a try.  If you haven’t heard it in awhile, pull it back out and give it a spin.  It is a classic album from the 80’s and one I will always have and listen to time and time again.  If you want the lyrics to the song, pull out a magnifying glass and look at the picture below.  Thanks and Enjoy!!!