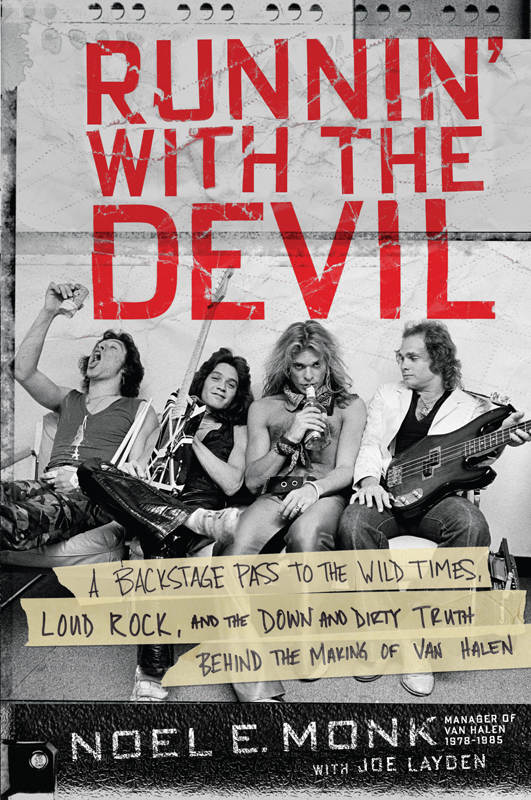 Runnin’ with the Devil: A Backstage Pass to the Wild Times, Loud Rock, and the Down and Dirty Truth Behind the Making of Van Halen by Joe Layden and Noel E. Monk…now that is a mouthful for a book title.  The book takes you on the journey of the David Lee Roth era of Van Halen and for some the true era of Van Halen.  The story is from the point of view of their Tour Manager and later Manager Noel E. Monk.

Before we get in to it, if you want to read a much better review of the book, go see my friend Deke at his blog as it was his review that made me get this when Amazon offered on the Kindle for only $2 (or was it $3)…either way it was cheap and worth that price.

The book picks up with Noel coming in as their tour manager for the tour supporting their incredible debut album ‘Van Halen’.  We don’t get any insight into the making of that album or really any album for that matter as Noel didn’t go to the studios while they were recording (or rarely ever did). We also don’t get any information on their forming or even their time with Gene Simmons which would have been nice, but again, this is not a band member telling the story and I had to get over that fact.

What you did get were some great stories about life on the road and the incredible amount of shit that poor Noel had to deal with in managing this band.  You get some deeper insight into the personalities of the band.  David Lee Roth was the egotistical front man (and one of the best) who was also one of the main drivers in pushing this band forward.  Edward Van Halen was not only one of the greatest guitarist every, but a very naive, young man, almost childlike at times and a massive user of drugs…hell they all were.

One of the more disappointing things was that there weren’t a ton of stories about Alex Van Halen except towards the end of Noel’s run with the band (which I won’t go into as I don’t want to spoil anything) and even fewer on Michael Anthony.  He did make Michael out to be this very quiet, sheepish man who was just along for the ride and content with what he was doing.  I get the stars of the band were David and Eddie and that is why they get most of the coverage.

The story basically covers the Sex, the Drugs and definitely the Rock & Roll; however, there were little surprises about the band’s lifestyle.  They were no different than any other band at the time or since.  They had tons of drugs and tons of groupies.  The band were going at a breakneck speed for years just touring, recording and touring again. I can’t imagine the stress and pressure they were going through.  It sounded exhausting.  It was also the reason the album quality started to dip until 1984.  The stories around the time of 1984 are very enlightening on how much trouble the band was having and how David’s ego was really getting in the way.

If you want get some good stories about their touring and what it was like to be the manager of such a popular band, you are in for a treat.  I can’t imagine how hard it was to herd these cats around all the time.  If you are looking for more into the bands minds about their formation or even the making of the albums, you won’t find that here.  I have read so many over the last few years that had band member input that it was hard for me to not have some of that point of view.  It doesn’t mean I didn’t find this enjoyable, I did despite how negative this post might come across.  For me, there were no real big shockers as it is kind of what I have expected about the band from interviews and stories I have read over the years.

If you can get the book cheap, it is definitely worth the purchase especially if you are interested in the road stories of touring as there are a ton of those.  Some are very entertaining and will make you laugh or at least smile. Some will make you sad, sad in a pity kind of way.  You won’t cry though, nothing that dramatic goes on.  I would like a book now on the Van Hagar years and their touring to see how life changed for them with the new dynamics of the band.  If I had to rate it, I would give it a 3 out 5 stars as it was good and a very easy read.  It was entertaining to see how these guys behaved, but didn’t leave me wowed.