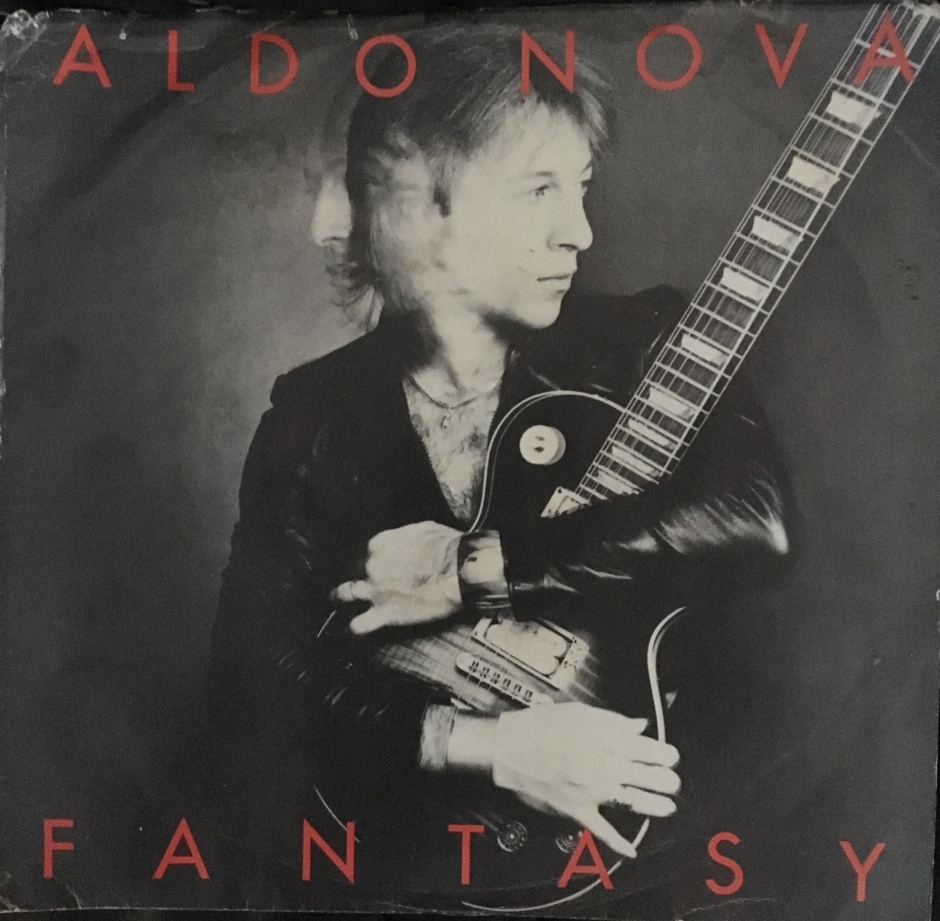 Aldo Nova’s debut album came out in 1981 and it gave him his one and only hit.  Yes, he is considered a one-hit wonder.  That song was “Fantasy”.  The reason he is considered a one hit wonder is the song “Fantasy” was the only song that he released that made it in to the US Top 40 Chart.  It reached up to #23.  He did have two other singles make the Billboard charts, but they never broke the Top 40.  I find that one hit wonder label ridiculous because on the US Mainstream Rock chart he had 3 Top 15 songs…”Fantasy”, “Monkey On Your Back” and “Blood on the Bricks”.  The One Hit Wonder status only relates to the US Top 40 chart.

All that aside, let’s talk about the song “Fantasy”.  The album version of the song opens the album and is 5:05 in length.  The single version that we are discussing from the 45 that I have is a lot shorter at only 3:13,  What is the big difference?  The opening sequence on the album (and the video) has a a slower build up with the synth sounds creating a helicopter that is flying in and after it lands you have a laser blast that then kicks in to the song.  The radio single cuts all that out as well as the last minute of the song which is basically repeating the chorus over and over.  It is now short and compact and full of punch.

What I love about the song is how Aldo pulls together several different sounds.   He has the guitar arena rock of the time, he adds the synthesizers and he brings a pop sensibility to the song which makes for a great blend and style that made the song captivating.  A slight problem with it is that the song is a little dated when you listen to it, but it still kicks ass.

The single, according to wikipedia, was released in 1982; however, I disagree since the copyright on the 45 is 1981.  Usually that will match up with the year of release (unless it was released in January then that might explain the difference).  Also, they show the single length at 3:58 and you can plainly see in the picture above that is not the case.  Either way, I had to grab this when I found it as Aldo Nova is one of the few artist I have actually met and have an autograph from so for that he will always be aces in my book. 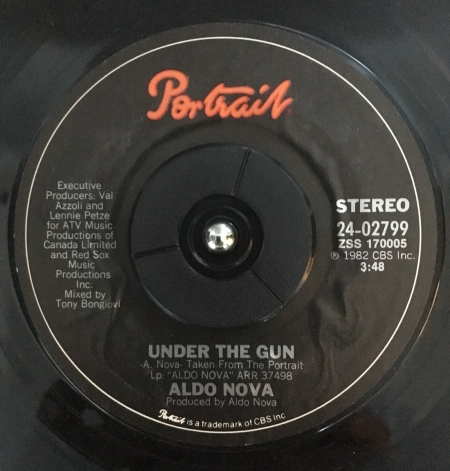 The flip side of the 45 is another great song called “Under the Gun”.  It is another rocker with some heavy guitars and drums.  It is more of a rocker than “Fantasy” and honestly, I think it is a better overall song.  But it is the B-Side so wasn’t the main focus of the release.  Which is a shame because the guitar work and the solo was something worth listening to in my opinion.  It was never released as a single and funny enough is now more prominent of a song because one of Aldo Nova’s greatest hits packages was called “Under the Gun…A Portrait of Aldo Nova”.  The version on here is the actual album version.

Since this is still about the single “Fantasy”, check out the video below and you will be in for a treat.  If nothing else, you are going to love Aldo’s full bodied leopard print jumpsuit.  It is worth the price of admission.  Where can I get me one of those.

City nights, summer breeze makes you feel alright
Neon lights, shining brightly make your brain ignite
See the girls with the dresses so tight
Give you love if the price is right
Black or white, in the streets there’s no wrong and no right, no

Outta site, buy your kicks from the man in the white
Feels alright, powder pleasure in your nose tonight
See the men paint their faces and cry
Like some girl it makes you wonder why
City life, sure is cool but it cuts like a knife, it’s your life