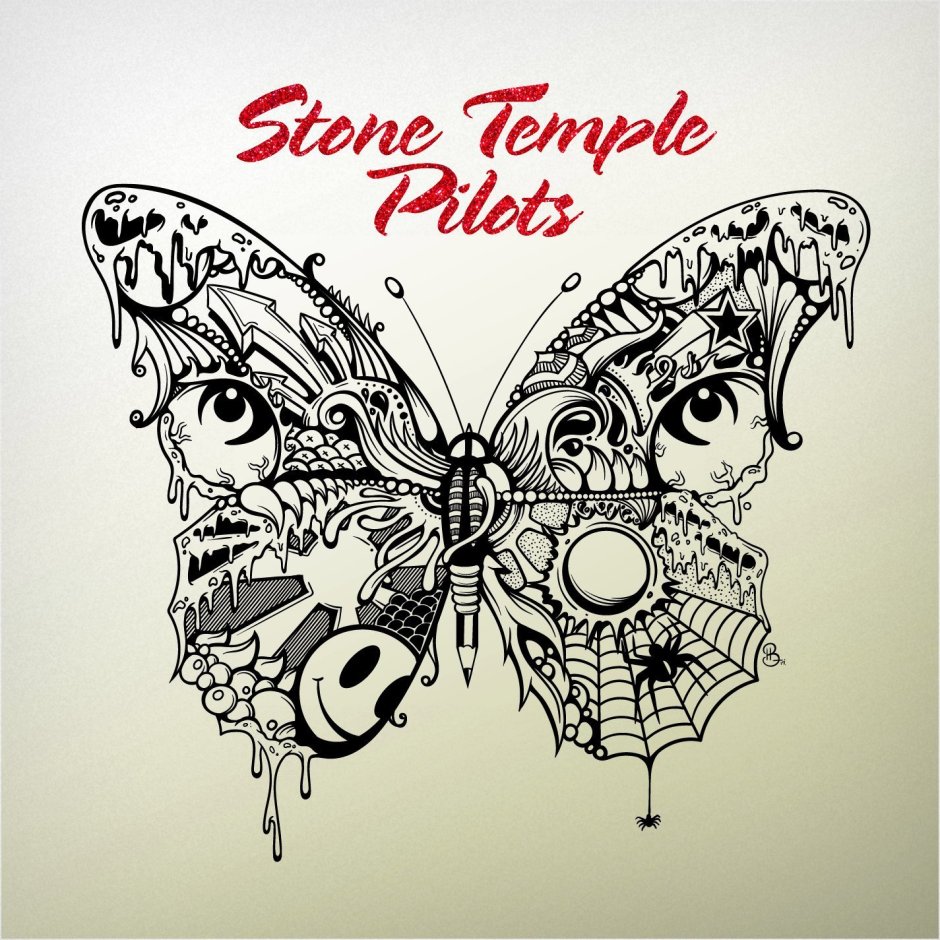 Stone Temple Pilots are back with a brand new album and a brand new singer.  As you probably already know the story, their original lead singer was one of the most iconic lead singers of any band, Scott Weiland.  Scott had a lot of troubles with addiction and was in and out of the band several times.  He was replaced with Chester Bennington of Linkin Park, but Chester left to focus solely on his original band.  Since this time, both singers have passed away and will never rejoin the band.

Now STP has a decision to make.  Do they continue as a band?  The answer to that is obviously YES or I wouldn’t be doing a review of their new album.  Do they get a new lead singer that is completely their own person and nothing like the previous singer or do they get one that sounds just like Scott Weiland?  The answer to that will come later, but first let me explain why I asked that question myself.

In history, bands have always replaced lead singers.  There are two types of replacements..1) The singer that sounds nothing like the original singer and 2) the singer that sounds just like the old lead singer.  Depending on which one you choose can have a different impact on the band.  I think throughout history we have seen both work, however, for me there is only one solution.

Let’s look at the first, the new singer sounds nothing like the original singer.  There are many examples of that happening and quite successfully…Deep Purple has done it, Black Sabbath, Rainbow and even Van Halen.  Let’s look at Van Halen…with David Lee Roth (the original singer) and Sammy Hager (the replacement) were totally polar opposite singers and styles.  However, each band  was extremely successful in their own right.  Why you might ask? Because the band sound was still Van Halen and the songs were great.  Also, there was no real comparison between the two.  It was really two different bands that just happened to have the same name.  I personally like both versions (I am little more partial to David’s era just because I liked that sound a little better).

Now, the other type is where the band hires a singer that sounds just like the original singer.  Case in point…Journey (first off I know Steve isn’t the original but bare with me).  When Steve Perry left the band, Neal Schon and company decided to find a singer that sounded pretty damn close to Steve Perry with Steve Augeri with very little success.  When Augeri left they wound up with someone from Youtube of all places that sounded even more like Steve Perry (a whole helluva lot more), Arnel Pineda. Both were great singers, but there were two big problems.  The songs were not good anymore and the singers were so much like Perry that you couldn’t help compare and that comparison couldn’t hold up.  Steve Perry was who everyone loved and there was no getting over that.  The albums didn’t sell at all as no one wanted new music without Steve Perry. The only thing it did was allow Journey to tour and basically play only the songs that everyone wanted to hear and so that has allowed them to continue and still draw a crowd. 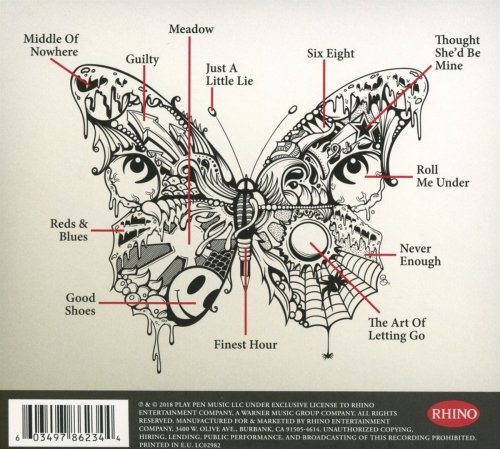 To make a long story even longer, let’s now get back to STP.  What route did Stone Temple Pilots take?  I will tell you my opinion.  The went with option #2.
A singer that sounded exactly like their original singer, Scott Weiland. STP went with Jeff Gutt who is a good singer, but he sounds or is trying to sound too much like Scott.

Why is that a bad thing?  Because you can’t help compare the two and when that happens, that is where the trouble lies.  There is no comparison.  As I said earlier, Scott was one of the most incredible lead singers and front man for a band ever.  The last thing we really want is someone that is trying to sound like him.  We wanted someone that could sing the old songs, but had his own identity. After listening to the album, I would really have preferred someone that brought a completely different vocal style to the band. Jeff doesn’t have an identity on this album. It feels at times like they are making him sound like and sing like Scott.

When I heard the first single, “Meadows”, I liked it.  It got better with every listen even though it sounded a little like Scott.  The band sounded incredible and I liked Jeff’s vocals.  The song was different enough from old STP that it appealed to me.  Still does.  Actually, it is one of the better songs on the album. It wasn’t a carbon copy of STP.

I am not going to go song by song as you would get tired of me repeating myself a lot.  I was a little disappointed at how much the DeLeo Brothers had Jeff sounding so much like Scott at times.  I wish they would have let him shine more as an individual. Instead the album feels a lot like a tribute band at times. 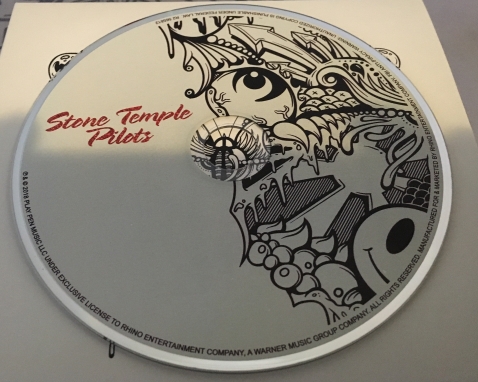 There are bright sides to the album musically, the sonics of STP are there. There are some strong songs on here, but there are some duds as well.

And here is where I become a little of a hypocrite.  As much as I didn’t want Jeff to sound like Scott, it is actually those songs on the album that are turn out to be the best. It is where both vocally and musically everything seems to gel.

One instance is the song “The Art of Letting Go”.  This is one of those songs when I first heard it I hated it because it was Jeff doing Scott completely. The more I listened to it, the more I liked it.  It has a charm to it and an overall sadness to it that Jeff captures in the vocals. As much as I wanted to hate it, I couldn’t.

The band also shines when they crank it up a notch.  The heavier rockers such as the incredible second single “Roll Me Under” and “Six Eight” really show that the band still has some chops. The songs have great energy and that classic STP sound.

The other songs on the album that capture some magic are “Middle of Nowhere”, “Never Enough” and “Guilty” which have the band shining and it reminded me why I have been a fan for all these years.

Outside of the songs I have mentioned, everything else falls way short.  For me, it was either the songs were too weak or the vocals weren’t powerful enough.  Lyrically and sonically, the songs weren’t as interesting or compelling as they rest of the album.  Overall, it was a little disappointing.

I also think one of the biggest problems with the album is the band produced the album.  I don’t usually like it when bands do that. They don’t have that outside third party to bounce ideas off and someone to tell them NO every now and again.  There were times they needed to be told NO or told to boost this or that. It is tough to critique your own work. That was a missed opportunity, big time!! 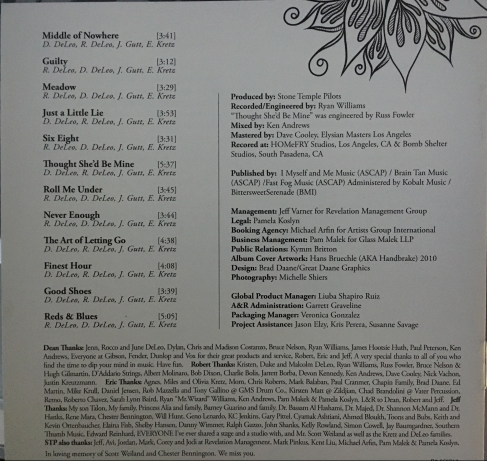 7 keepers out of 12 songs – 58% (2.9 out 5.0 stars) I really wanted to like this album.  I had some high hopes after hearing the first two songs.  The band sounded great and Jeff’s vocals on those two songs were spot on.  Sadly, the remainings songs weren’t there and the vocals weren’t memorable enough to make the album standout.  I feel there is potential, but this one was lacking for me.  They might be able to end up touring forever, but only playing the songs that everyone wants to hear.  The albums…we will see.  Now, I will have some great songs that I will keep in my library and listen to proudly with the rest of STP, this album just wasn’t what I dreamed it would be.  Maybe next time.

Now on to a side note, I have a family involvement on the album as my brother-in-law was the recording engineer (Ryan Williams).  I was as honest in my review as I would be for any album I do and from what I said above, you can see I didn’t hold back.  But here is where I will say, I did think the album sounded great thanks to Ryan.  However, now I am afraid he won’t talk to me anymore after this review, but his part was sensational!! Did I mention the engineer on this album is absolutely incredible. (ok, maybe that will make him feel better).

Sorry I rambled on for so long.  Thanks for staying this long if you made it to the bottom.