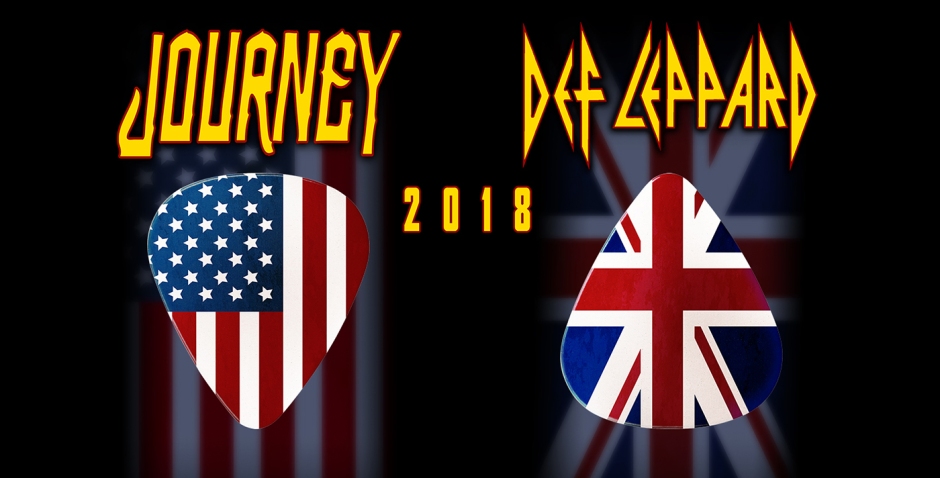 Yesterday, I did the review on the Def Leppard part of the show (since they opened the show they should get the first review).  Now, it is time to talk about Journey’s portion of the show.  After seeing Lep, I was really pumped and excited to finally see Journey live.  I have never had the pleasure and I can’t believe I missed them in the Steve Perry years.  Journey has survived all these years because they have something a lot of bands don’t really have and that is songs.  Journey’s hits are some of the most loved and admired songs ever.  I mean  “Don’t Stop Believin'” might be the most recognizable song around the world.

The band is still pretty much in tact.  At least the band from the era I grew up with. You have founder Neal Schon, Jonathan Cain, Ross Valory and Steve Smith.  All these guys were there doing the early 80’s and their heyday.  11 years ago they added vocalist Arnel Pineda who they found off Youtube and let me tell you what a find he was.  I still wish they would have done more with Jeff Scott Soto, but oh well.  Arnel is pretty darn good vocalist. 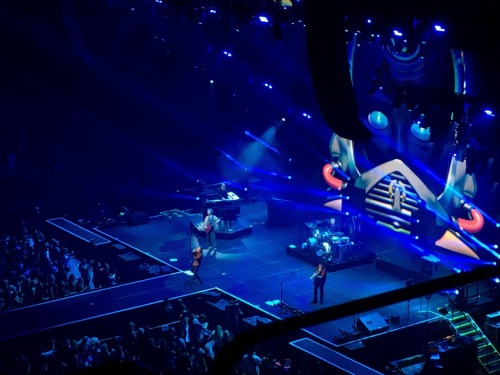 The stage set up was slightly different than Def Leppard’s, but not by much.  They both used the big 40 Foot screen in the back and the 3 large screens up top on the front of the stage.  Journey stripped back all the risers and platforms that Def Leppard used and had a much simpler set up.  Piano on the left, drums in the middle, Ross and Neal up front and Arnel all over the place (more on that later).

In the Def Leppard review, I discussed ticket prices, beer prices and our seats so no need to rehash any of that here, we will just go straight into the set list and then talk about the highlights of the show (no song by song as that would take too long cause this is going to be long enough as it is).

The band  came out on stage and had a rather uneventful opening.  No big entrance or anything special.  It was kind of weird if you ask me.  Seemed a little discombobulated.  But they eventually got into Separate Ways and that was a good energetic song to open the show.  For this song and the next, “Only the Young”, Arnel was running around the catwalk with no lighting.  My first thought that Neal was a douchebag and needs to give the vocalist the spotlight instead of him, but I think it was a mistake as by the third song it was finally corrected.

After all that, things really got rolling as they plowed through hit after hit and the fans were loving every minute of it (wait…that is Loverboy…bad reference).  We then come to the first of many solos for Neal Schon.  This one wasn’t too long, but in reality every song for Neal was an individual guitar solo.  Neal is a little off-putting to me, but the man can certainly play guitar.  He is something special and he turned each song into like a 10 minute guitar solo that were all amazing (not really 10 minutes, that is called an exaggeration to get a point across that they were long).  And actually, I think I liked the song solos better than his 2 guitar solos…that is right, he had 2.

I zoomed out for this picture as they were playing “Lights” and everyone had their phone out.  I wasn’t really this far from the stage, it was all the camera perspective.

Each member of the band had a pretty good solo opportunity (except I don’t remember Ross getting anything extensive like the others.  When I think solo, I think guitar, bass and drum.  I am not used to keyboard solos.  Jonathan did shine.  It was nice to see something different than the normal solo.  He is an outstanding songwriter and actually one helluva musician. During the solo he threw in parts of “When You Love a Woman” and “Send Her My Love”, I believe.

Now, the solo of all solos and probably the best thing of the entire night (Def Leppard included) was Steve Smith’s drum solo.  What a fucking beast!!!  Sorry about the language, but DAMN!!  He was incredible.  It went on for quite awhile and the things he was doing were mind-blowing.  He plays with such finesse and feel during the songs and then you see what he can do when he lets loose is nothing short of amazing.  Can you tell I liked it.  And to top it off, my daughter overheard the lady next to her say…”He (Steve) is just showing off because he has two arms”.  Wow!!  Unbelievable…but a little funny as well.

And here is where I feel bad for Neal Schon.  The great guitarist he is was overshadowed by this performance by Steve Smith.  Neal played his 2nd solo right after this and it was a little underwhelming as a result and we are talking Neal Schon so that tells you how much I enjoyed that drum solo.

Let us not forget about Arnel.  What can I say about this guy.  He looked like he was a kid in a candy store.  He was all over that stage, jumping, running, leaping, slapping everyone’s hand (both crowd and band members).  I think out of everyone in that arena, he was having the most fun.  He looks like he feels utterly blessed to be singing with Journey and for the fans.  He jumped off stage and ran through the crowd twice, once during “Wheels in the Sky” and the second time during the encore “Lovin’, Touchin’, Squeezin'”.

And don’t forget his voice.  The man can sing like no other (except Steve Perry).  He sounds like Perry and when I heard “Open Arms” and “Faithfully”, I actually got chills.  It was that good and since I had never seen Journey live before this was the first time hearing those live by Journey.  I have to give him props as his vocals were spot on all night and might be one of the better singers out there right now doing it live.

Journey ended up playing 13 actual songs and the rest were the solos.  The show lasted 1 1/2 hours long and flew by.  They put on a great show and it was well worth it.  When you combine Def Leppard & Journey into the same night, I would say it is money well spent.  Go check them both out and you will not be disappointed. 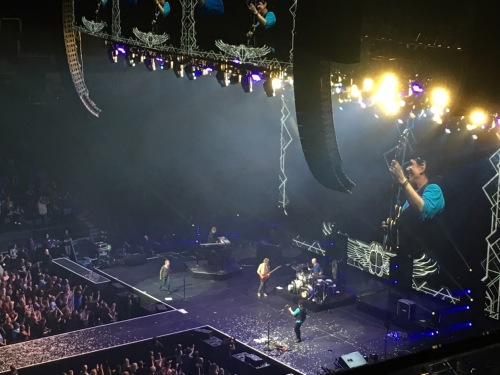 There has been a lot of press about Jonathan Cain and Neal Schon’s dysfunctional relationship. I won’t go into details as you can search it if you want to know, but apparently Neal & Jonathan don’t get a long very well.  During the show, the two were having a great time, but they kept to themselves for the most part.  When Jonathan was on guitar, he seemed to keep his distant from Neal and wandered around aimlessly.  In one instant, Neal was on the catwalk and Jonathan started walking out.  Neal turned around to come back and Jonathan quickly got off the catwalk.  And to add, with Neal’s playing do you really need a rhythm guitarist.  Probably not and he would be fine on keyboards all the time.  I am sure all is okay with the band and I am reading too much into it, but maybe not.

And now we are at the end so I guess I need to answer the question I ended the Def Leppard concert review with.  Which band did I like better?  Actually, it was Journey!!  I know…I can’t believe it either.  My wife and daughter thought Def Leppard was better, but I didn’t see it that way.  I have seen Leppard so many times and for me the set list was uninspiring (not that Journey’s was).  I had never seen Journey so it was fresher and newer to me and then throw in Arnel’s vocals and Steve Smith’s drum solo and you have a winner.

There you have it.  I hope you enjoyed both reviews because I enjoyed writing them and seeing the shows.  Until next time…and there will be a next time…which should be Needtobreathe in August.

And excuse how terrible the pictures were, we were too far away and our phone camera sucks.