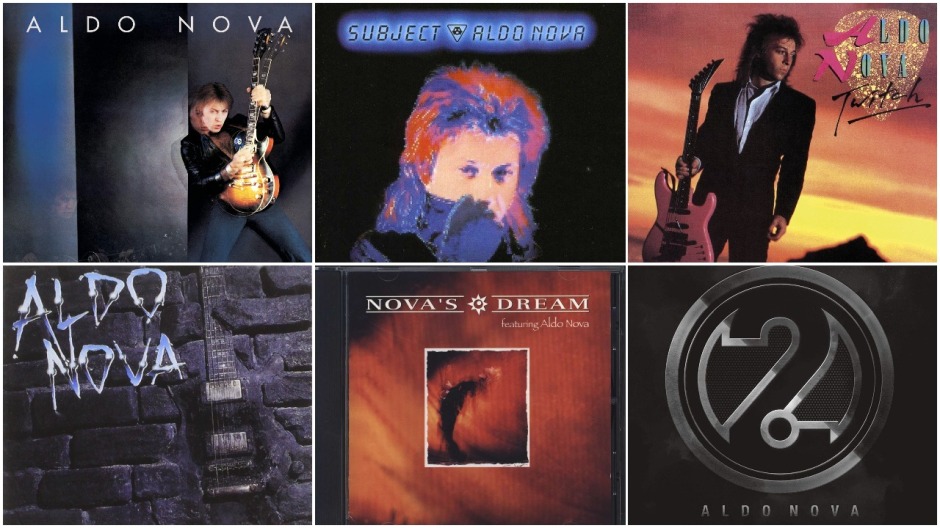 Ever since the first time I heard the song “Fantasy” on MTV back in 1981, I have been a huge fan of Aldo Nova’s.  In fact, I finally got to meet him back during his “Blood on the Bricks” Tour back in 1991.  It was cool getting his autograph and the band’s which included current Bon Jovi guitarist, Phil X.

Aldo hails from Canada and has worked with Jon Bon Jovi on the debut album of Bon Jovi and his solo album from the movie ‘Young Guns’ which he wrote the guitar riff for “Blaze of Glory”.  He has also worked with Celine Dion where he has written for her as well as produced which garnered him a Grammy for Producing her album “Falling Into You”.  He has been busy.  However, we will only concentrate on his Solo work here for this post.

He has put out only 6 solo albums and there is talk of some new material coming and if so, I will be in line to buy it (okay, I will click away on my computer and have it delivered).  From his eponymous debut to Aldo Nova 2.0, we will go through and I will rank them from Worst to First.  I am sure people will disagree the order, but that is fine as this is only my opinion, you have your own.  I do hope you enjoy it nonetheless and maybe you discover something new and try him out. 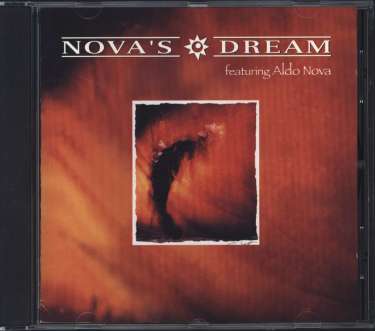 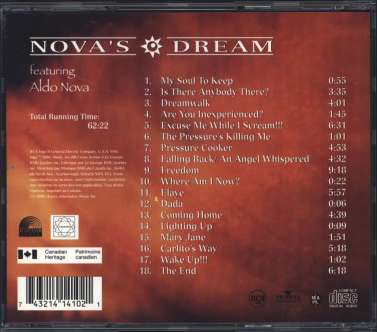 This was Aldo’s last album for over 20 years.  It was mostly an instrumental album and has been called one of his best by many people.  However, I am not one of them.  I found this to be a self-indulgent train wreck.  I consider this to be part of his “Drug Years” as he must of have been on something while recording this.  There is a song called “Mary Jane” and you do actually hear some heavy inhaling…I’m just saying.

Nova’s Dream for me was more of a Nightmare.  It is so bizarre at times, so out of left field and so not what I like to hear as songs.  I can deal with an instrumental album, but give me songs, not a bunch of noises put together as songs.  Now, it isn’t all bad. There were two highlights for me including “Carlito’s Way” and the Jimi Hendrix inspired “Excuse My While I Scream”.  Both excellent songs and if the album was full of these type songs, it would have been at the top of this list. 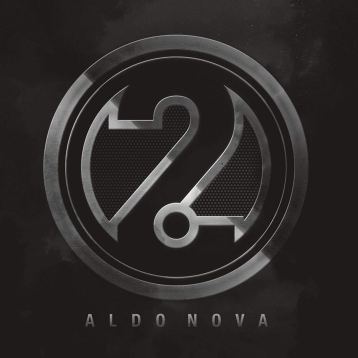 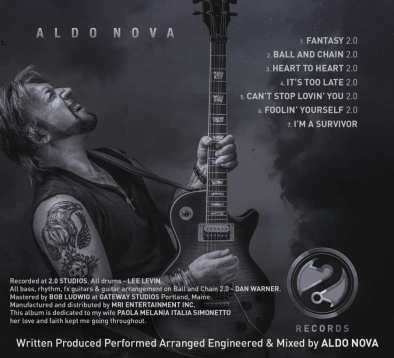 Aldo finally returned after a 21 year hiatus from Solo work and what did he do?  He re-imagined 6 songs off his debut album and called it 2.0.  Now, he did throw one new song in called “I’m a Survivor” and I have to say that I loved the new song.  Best thing on the album and instead of a re-hash of old material, a full new album would have been preferred over this.

The re-imagined songs were totally unnecessary.  It was kind of like when George Lucas added bits and pieces to the original Star Wars movies and everyone thought it sucked.  That was how I felt about this album.  Those songs were already the best they would ever be and should never, EVER, be touched.  He stated he was playing them like if he was doing them live…okay, then a LIVE album would have been awesome!!  Not this…sorry. 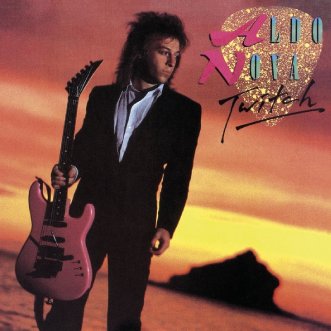 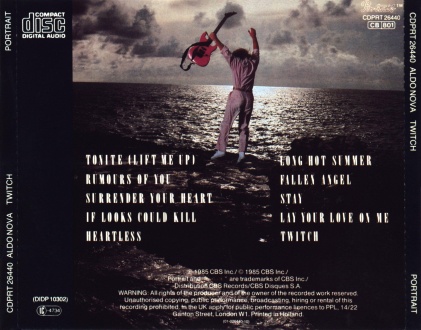 Alright, from here on out you can’t go wrong.  The next four albums on the list are the best ones.  This one just slightly weaker than the others.  Aldo was rather displeased with this album as the record label made him make a more commercial album since ‘Subject’ was not as well received and not as radio friendly (I disagree).

The album is definitely more radio-friendly and it is a little more safe than his previous works so I get what he doesn’t like about it.  But…there are still some great tracks on here that  I love listening to including “Tonite (Life Me Up)”, “Rumors of You”, “Heartless” and “Long Hot Summer” to name a few.  There were some great guitar playing and it is a great pop rock album.  Not heavy enough to be just a rock record. 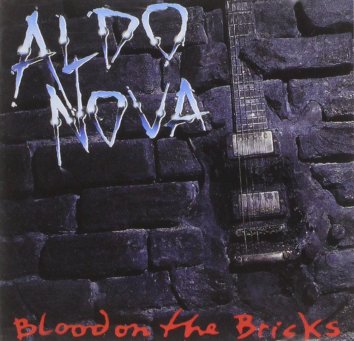 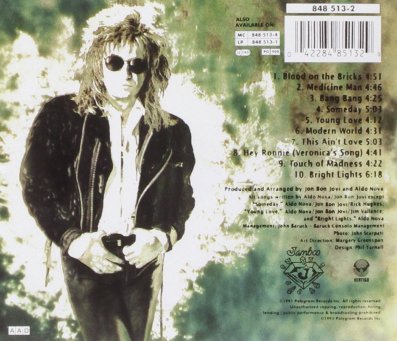 His fourth album brought back a heavier Aldo sound and a more modern rock album.  With the help of his good friend Jon Bon Jovi, Aldo made a sensational return to the scene after a 6 year break from his last album.  After helping Jon Bon Jovi on his first solo album for the “Young Guns II’ soundtrack, Jon returned the favor and Aldo was even signed to Jon’s label Jambco Records.

From the opening rocker and title track “Blood on the Bricks” all the way to the last track “Bright Lights” you get a rock album with some nice ballads thrown in. There were a bunch of highlights including “Medicine Man”, “Someday”, “Young Love” and “Modern World”.  The album had a darker tone to it and more guitar than synth which he also can use a lot.  Just fantastic!! 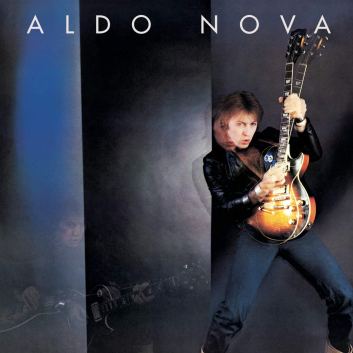 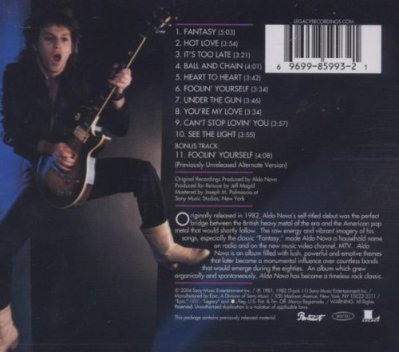 Now, I will probably catch a lot of grief for this not being the #1 album.  However, I don’t care.  I love my #1 choice.  I know this one has the one of the most iconic 80’s songs on it, “Fantasy” anyone!!, but I like one more better.  “Fantasy” is a beast of a song and it showed Aldo’s great guitar playing skills and shows he wasn’t afraid to use a lot of keyboards either.  It was the 80’s. That wasn’t the only great song.

The album had many tracks that put this album so high on the list.  It has “Ball and Chain”, “Heart to Heart”, “Under the Gun”, “It’s Too Late” and “Can’t Stop Lovin’ You”.  Almost the whole album kicks ass.  There were two songs that missed the boat for me and why this sits at #2 and not #1.  They are “You’re MyLove” and “See the Light”.  One felt like a filler and the other too cheesy.  They didn’t grab me like the others. 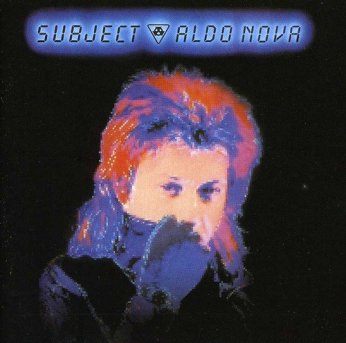 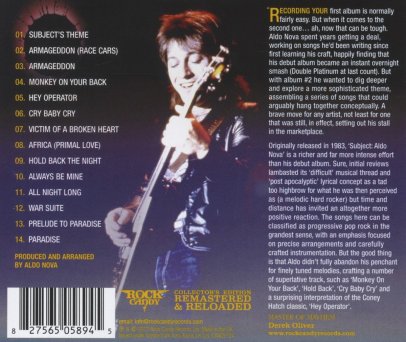 That leaves only one!  “Subject…Aldo Nova” is my favorite Aldo Nova album.  It had a loosely concept album theme and feel to the whole thing.  It talked about drugs and the dream of living in a world that is paradise as opposed to the hardships we face everyday.  At least that is what I got out of it.  It is heavy in guitar, but even more so in synthesizers.  The album is full of instrumental pieces layered between the songs that gave it that whole concept album feel.

The album had FLOW!!  Flow is what I love about great albums. The songs seem to fit perfectly together and one plays off the other and it all just works.  This album didn’t work for fans at the time, but grabbed me from the get go.  Songs like “Monkey on Your Back” and “Hold Back the Night” rocked out for me.  The ballads on this thing were sensational as well.  Songs like “Victim of a Broken Heart” and “Always Be Mine” were some of the best he has written and some of my favorites of the 80’s.  But you also get the song “Paradise” that closes out the album and ends the journey in fantastic world that everyone would want to live.  It is still played regularly for me and played more than any of his other albums which is why it is my #1!!

And there you have it, the Aldo Nova studio albums in order of how I rank them from the worst to the best.  Let me know what you think.  Where did we differ and where did we agree.  What is fun about these list is how differently each album impacts people. What I like, you might not, but we like the same artist and that is all that matters really. And if as a result, you find something new, then my job is done!!!

8 thoughts on “Aldo Nova – The Albums Ranked Worst to First”