This was a show I was really eager to see.  I became I real fan with Scott Stapp’s 2nd solo album ‘Proof of Life’ and when he released his third solo album ‘The Space Between the Shadows’ and announced a tour, I was all over it.  I got on line and bought 2 tickets and we were able to get 2nd Row.  And to top it off, the show was at the McGlohon Theater in Charlotte which is a really small venue and it was an old church.  A great spot for a show.

The show started at 7:30 and we ended up getting there around 7:00 which was early….at least I thought it was.  There weren’t too many people there, so I thought I had the time wrong.  I mean it was sparse.  When the opening act Sunflower Dead came on, the crowd was pretty thin.  I give the band some credit as the crowd just sat there like a bump on a log and these guys were up there giving it their all.  Sunflower Dead is a Metal band from California who  used to wear make-up and costumes but now have a more normal look, you could say.

They were pretty great.  Heck, my wife enjoyed it and that is saying something.  The lead singer, Michael Del Pizzo, was a beast on stage.  We were so close and when he would come to the end of the stage, he would look right at you and give you this look.  I swear I thought he was going to jump down and kick my ass (I’ll admit, he would have won).  And the coolest thing, he played the accordion.  Yes, that is right.  They are an Accordion metal band.  Hell to the Yeah!!!

The second act up was Messer.  Messer is from Texas and they are a more modern hard rock band (less metal than Sunflower Dead).  They had more of the stage to play with and had a better lighting rig and some smoke.  A little more polished act and the music was more in line with my taste. 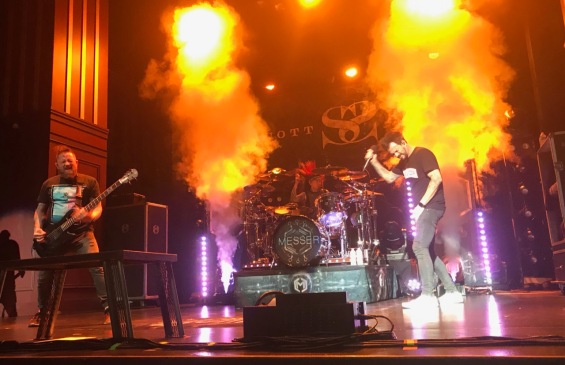 They were pretty good.  A lot more active than the prior act…well at least the bass player and the drummer were.  And the drummer…let’s talk about him.  He was freaking awesome.  He had long black & red hair with a fan going keeping his hair blowing nicely in the wind.  He looked like he was straight out of the 80’s Hair scene and would have fit in quite nicely.  He was entertaining as hell to watch. 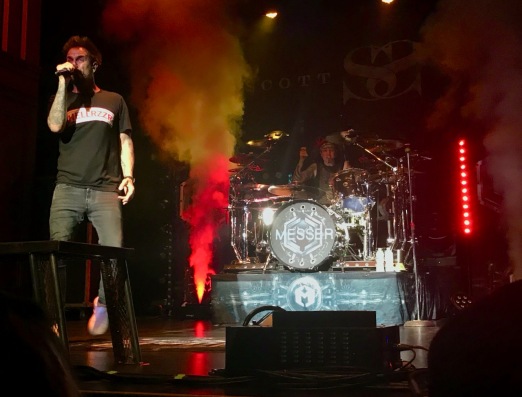 Messer played their radio single and wanted everyone to sing along, but I don’t think many people knew it…I didn’t. That is okay though, I thought they were really great as well and I enjoyed their show which was a great warm-up for the main attraction…Scott Stapp.  I think I will check out both their album as well as Sunflower Dead’s latest.  I think the only draw back was the lame crowd.  That wasn’t the band’s fault in this case as they both were tearing it up. 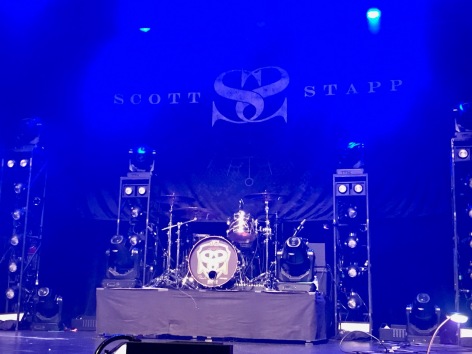 Now on to the main attraction.  Scott Stapp came out and the crowd went nuts (crowd is actually an overstatement here).  The venue was maybe half full which did surprise me. I’ve seen shots from other shows and the crowds were bigger than here so not sure Charlotte will be on his list to come back anytime soon.  However, Scott and his incredible band played like they were in front of 20,000 people.  He gave it his all and I swear it looked like Scott was having the time of his life.  I know I was. 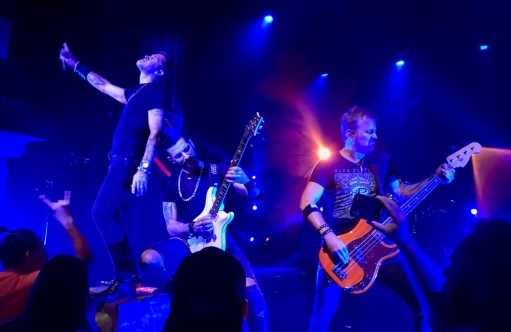 The band played 14 songs and split the setlist evenly between Creed songs and Scott Stapp’s solo work.  That is right, 7 songs each.  The Creed songs covered all the albums and the band nailed the tracks.  The energy and head banging were at full force.  Hell, I was bouncing around so much when I got home my knee was actually hurting (sucks getting old).

For his solo songs, he played 6 songs off his new album and let me tell you, all 6 songs were received well.  Even though the crowd was small, the fans there were Real Fans!!  They were singing along with the new songs with no problem.  That left only one song from his two other albums which I found disappointing as I love ‘Proof of Life’ and wanted more songs from that one, but it didn’t take away anything from the show.  It was still awesome in every way.

It was really cool to have seats so close.  I could reach out and touch them (but I didn’t as jail would not have been a good thing) and it was probably the closet I have been to the stage before.  I had 2nd row for Elton John, but there was a security pit between the front row and the stage.  This was a hell of lot closer.  It changes the energy level and impact of the show being that close.  I was so engrossed and I loved being on the side with one of the main lead guitarists Yiannis Papadopoulos (now that is a mouthful).  He was killing it and Scott gave him a lot of front time which was cool.  And damn, he had some gorgeous guitars.

I have to say, Scott is a great singer live.  He sounds as good as the albums and he puts forth the energy that makes for a great frontman.  What was so much fun was how much of a good time he was having.  He was always screaming after each song, pumping his fist and loving the energy coming from the crowd. The crowd sang along on some of his biggest hits and he was soaking it in and loving that his songs have impact people like they have.

It is too bad the tour is almost over.  Only two shows after ours.  If he comes around again, go out and see it.  You won’t be disappointed.  I have been to 5 incredible shows this year and this was up there as one of my favorites this year. 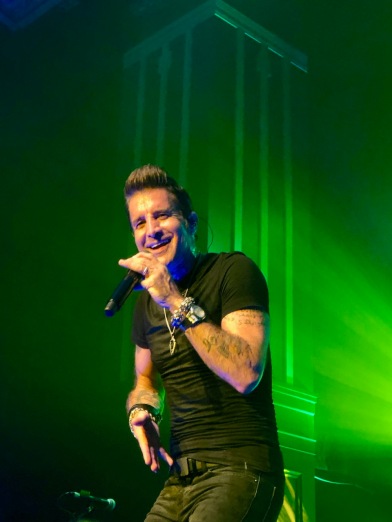 Okay, before I leave, did I get any souvenirs?  Of course I did.  I have my ticket stub of course and I did grab a guitar pick thrown from the stage for the 2nd act, Messer.

And I bought a shirt.  It was only $30 and that is bargain based on some shows I saw this year.  The front is actually the first pick at the top of the post.  The back has the cities of the tour.

And that is it.  I will leave you a few more pictures in case you want to hang around and look at them.  Thanks for stopping by and hanging out. 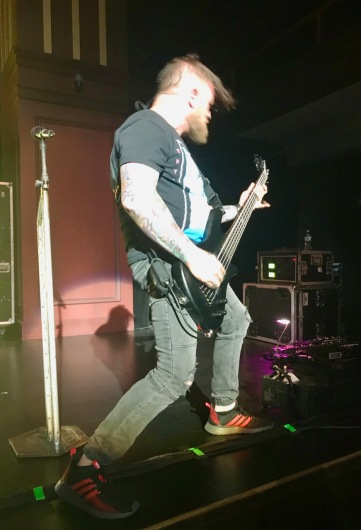