For My Sunday Song #206, we are discussing “Don’t Break My Heart Again” by Whitesnake off their 1981 album ‘Come And Get It’.  The first single off the album and it reached #17 on the UK Charts. The album did really well in the UK hitting #2 and was their highest charting album at that time.  Sadly, still absent from the states for the most part due to contractual issues.

The song is very personal and emotional song from David Coverdale.  It is about the ending of David’s first marriage (and I think “Fool For Your Loving” is as well too). David delivers some emotional and heavy lyrics.  There is a darker overtone with the subject matter and David sounds a little heartbroken.  It is a different side of him and Whitesnake as normally they throw the “cock rock” in your fact as they do in numerous other songs on the album.

It opens with the amazing Jon Lord on his Hammond Organ.  Neil Murray’s throbbing bass is mixed in and accompanied by Ian Paice with a hard driving drum beat.  The song has that great drum beat throughout and then the guitars are added with a cool riff.  Bernie Marsden delivers the solo that fits perfectly for the vibe of the song.  It is also one of David’s finest vocal performances on this album as he puts enough emotion into his vocals to get the message across loud and clear.  It is such a stellar track. 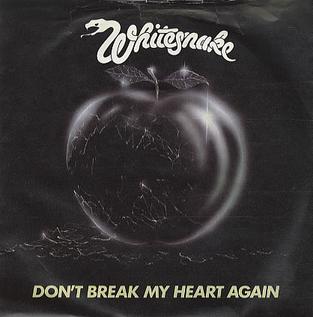 Check out the song below and let me know what you think.  I hope you enjoy it as much as I have.  Thanks for stopping by and have a Happy Sunday!

I’m gonna take it to the limit of my love,
Before I turn and walk away
I’ve had enough of holding on
The promises of yesterday
Every day of my life, it seems,
Trouble’s knocking at my door,
It’s hard to try and satisfy
When you don’t know what you’re fighting forTime and again I sing your song,
But, I’ve been runnin’ on empty far too long
I’ve had enough holdin’ on to the past,
Make no mistake, it could be your lastDon’t break my heart again, like you did before
Don’t break my heart again, I couldn’t take anymoreI never hide the feeling inside,
And though I’m standing my back to the wall,
I know that even in a summer love
A little bit of rain must fall
But, every road I take I know
Where it’s gonna lead me to,
Because I’ve travelled every highway
And they all keep coming back to you

Time and again I sing your song,
But, I’ve been runnin’ on empty far too long
I’ve had enough holdin’ on to the past,
Make no mistake, it could be your last