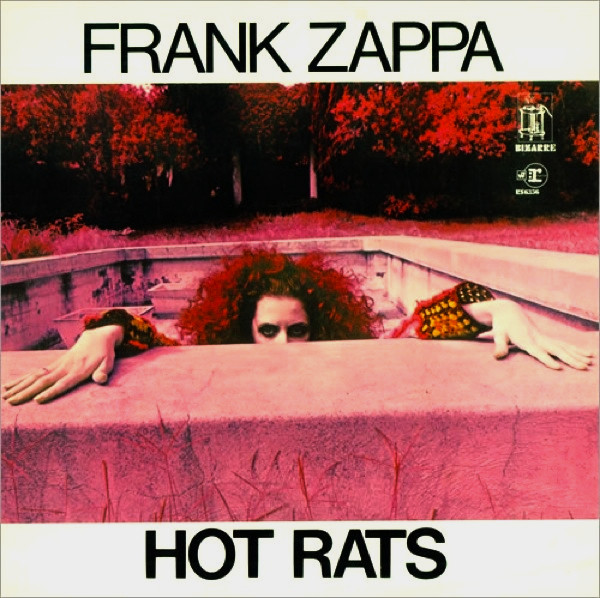 Alright…You Picked It! And here it is. The one you picked was Frank Zappa’s ‘Hot Rats’.  The votes were as follows:

Thanks to all for participating.  The September choices will be up on Saturday!

Frank Zappa is not a typical artist for me.  I have heard some of his work whether his solo work or his Mother of Inventions work.  However, it was all too weird for me and not my genre of choice.  Recently, some of my local record shops have been posting some old Zappa albums and ‘Hot Rats’ has been shown a lot.  And I was thinking of albums for the “You Picked It” series of albums I have never heard so I threw this one up.  And wouldn’t you know, it won so now I have to sit through this weirdness.

And I have to say that I am glad it won.  It is a very interesting and compelling album that I unexpectedly was drawn to and I immersed myself in to it for a couple weeks.  I didn’t realize the album was mostly instrumental so that was my first surprise and the second surprise was that it was awesome.

The album opens with the song “Peaches en Regalia” which sounds very dated as it has this 70’s Jazz flavor to it and when I hear, I can’t help but think about The Jefferson’s and I picture George and Wheezy dancing to the tunes.  Then at around the 2:20 mark, there is a drum sound that sounded like something I would hear from Jan Hammer so now I picture Crocket and Tubbs jumping in to the Ferrari and driving off.  The drums were actually done by Ron Selico.

The next track was “Willie the Pimp” and this one was more blues than jazz.  This one also had some vocals thanks to Captain Beefheart and the only song not to be a pure instrumental even though there is a lot of instrumental on this including an extra long Zappa guitar solo that is a major highlight of the song.  Although I did think Captain was great as the pimp and that raspy vocal deliver added to the effect.  It was funky and I could see him dressed with the big pimp hat strutting his ass down the street singing this song.

“Son of Mr. Green Genes” was up next and another almost 9 minute instrumental.  This one has Ian Underwood working overtime on all the horns as there were a lot on this one and he handled all the fancy keyboard work as well.  Frank Zappa continued to show what a fine guitar player he really was and a jazz guitarist at that.  And what I really love about the songs is the whole improvised feel to a lot of it.  It felt like they sat down, hit the record button and played, and I mean played! 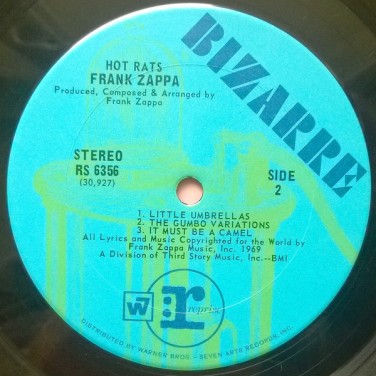 When you flip sides,  you get “Little Umbrellas” to kick things off. One of the shortest songs at just over 3 minutes.  This one is pure jazz and John Guerin’s drumming had that perfect jazz feel.  The keyboard/synth/organ work by Ian was smooth and Max Bennet’s bass layered in a fantastic little groove.  It was a short cool moment.

“The Gumbo Variations” is where it is all at with this album.  The over 12 minute piece was a magical moment of what seemed like jazz improvisation.  Letting the music feel you and play whatever came to mind. The journey takes you on so many fascinating stops whether it is Ian Underwood’s mind-blowing saxophone, the wickedness of Zappa’s guitar, Paul Humphries slamming drum fills or whatever the flavored instrument was of the moment.  It is one of those songs you let it flow and you sit back and try your best to take it all in.  You need to listen to it many times over to grasp all the different pieces thrown at you.

And last on the album is “It Must Be a Camel”.  It is a slow grooving piece and again the jazz fusion is in full force.  The most bizarre of the tracks with its weird changes and seems to have no direction whatsoever.  Which also gives it the charm that it has.  It was what I never understood about Jazz in that some musical stylings don’t seem to make any sense but it works all at the same time.  Maybe I’m starting to get the whole Jazz thing and it has only taken over 50 years to do so.

And that is it. Wow!  What a crazy and cool cat ride that was.  I have to say that the unknown of where they were going to take the songs was the fun of this album.  This is one where the journey is where it is at and the destination is as cool as the ride.  A completely wild and weird album that I found both fascinating and enjoyable.  Maybe Frank needs to be explored more.  I will give this a 5.0 out of 5.0 Stars as I really can’t find anything wrong with this album.  Yes, it is not my normal musical stylings, but maybe those stylings need to expand.

The September “You Pick It!” will be posted on Saturday.