There is nothing better than going through racks of CDs and finding something you’ve never seen before.  I was at 2nd & Charles in Mathews, NC with my wife (she was looking at books) and I started digging through the used CDs. I started in the “A” section and within 30 seconds I stumbled across this album…Robbie Williams “Sexed Up”.  Yes, in the “A” section as naturally that is where it would be instead of the “R” or “W” section.  Makes total sense.  It had Japanese or some Asian lettering on it so I snatched it up especially knowing that the price was only $3.50.

I did some research once I got home and all I could find out is that the CD is referred to as Robbie Williams – “Sexed Up/Forever Texas” and is an unofficial release.  As a result, Discogs won’t sell it.  I did see a copy on eBay for about $36 and Discogs had a single cd version on sale for over $100.  Either way, my $3.50 is looking like a pretty great deal. 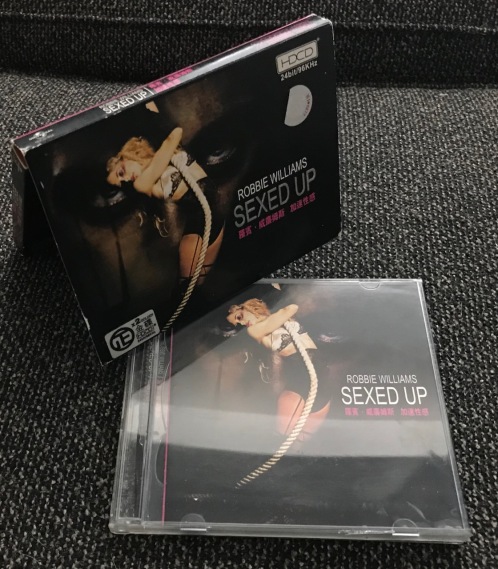 The packaging is great as the plastic CD case comes in this nice cardboard housing with a flap to open and remove your CD case.  The disc is also labeled as an HDCD whatever the hell that is supposed to mean.  I figured it was going to sound better, but it is CD, it already sounds good as a CD should.

The CD booklet had lyrics for most of the songs, however, they really weren’t put in an easy enough way to follow the flow of the song, but beggars can’t be choosey.  It also had some great pictures of Mr. Williams as seen below…

Did you notice something wrong with that picture?  If you didn’t, you need new glasses, contacts or laser eye surgery.  The Mr. Williams is Robin Williams not Robbie Williams.  Wow!!  I think someone didn’t do their research on this at all.  What a bonehead mistake.

The CD is a 2 disc compilation covering Robbie’s solo career up to the point which would put it at 1998-2003.  There are 36 songs, however, it is not really a greatest hits as it is missing the first 2 album completely, ‘Life thru a Lens’.  This is basically all the songs off ‘Sing When You’re Winning’, a handful from ‘Swing When You’re Winning’, a few from ‘I’ve Been Expecting You’ and most of ‘Escapolgy’ (but sadly, missing “Me & My Monkey”). 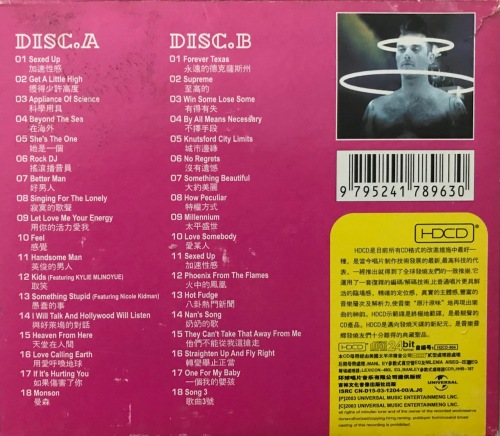 Overall, this is a great set of songs.  Sound is wonderful and I guess it should be if it is HDCD.  I really like the uniqueness of this release, the Japanese writing (I hope it is Japanese) and it is just cool to have.  I like different and this is it.  If I had to rate it, I would give it a 4.5 out of 5.0 Stars. If the compilation would’ve had “Me & My Monkey” and some songs from his debut, ‘Life Thru A Lens’, this would’ve gotten a 5.0 Stars, easily.  If you are out and you see it, pick it up and look for under the “A” section as that seems to be where it belongs.