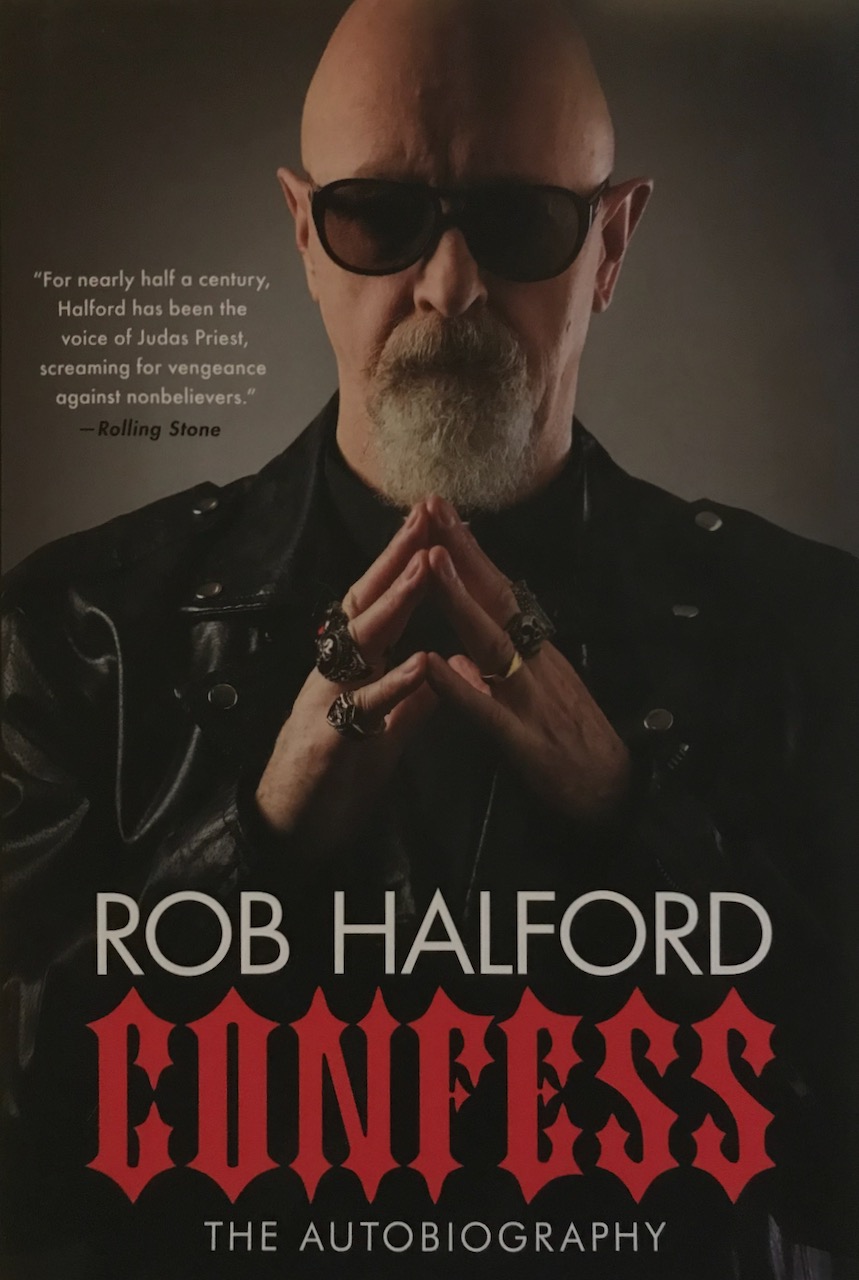 If you follow my site at all, you know I am in the middle of a Judas Priest Review Series where I am reviewing all the albums from the Judas Priest Collection Box Set (and a few more it missed). I thought as I am immersing myself in their catalog, why not find out some information about the band by reading Rob Halford’s book, ‘Confess’. They sum up nicely below who Rob Halford is but it is really a bland description. I think they left out is that Rob is the ‘Metal God’, Rob is a man who waves the Rainbow Flag proudly, Rob is sober for over 30 years, Rob is human, which means Rob is fallible.

The story of Rob Halford, told by Rob Halford, covers a lot of time. It starts off him as a child growing up in the Black Country of the U.K. His stint where he wanted to be an actor, and then his discovery that he could sing. And man can he sing. It spends most of the time talking about his time with Priest, but it really is about Rob, the person. His struggles in life, but not just with being gay. He struggles with that, but it was more about his struggles with hiding it as being the lead singer of a Heavy Metal band and what would be the fall out if it came out. Honestly though, he didn’t really try to hide it because a lot of the early Priest songs actually talk about it, but no one was perceptive enough at the time to figure it out. The story really is about his struggles with finding love and with trying to have sex while on the road while the band had easy pickings of the female groupies, Rob had to go to seedy truck stops and bathrooms to find love. It didn’t always go well as we find out when Rob has his own George Michael moment. Rob was very lonely, for a very long time and that caused a lot of drinking and a lot of drugs and then rehab. He had many bad relationships with guys that were really straight, it was a tough road. Rob, however, found his way sober and finally found love and it all had a happy ending, thank goodness.

And since the book covers basically 70 years of his life, it can’t go in to too much detail about each album or each tour, but it does cover all those things, just sometimes at a high level and a very glossed over look. You do get the stories about landmark gigs and about some of the activities of recording the albums and the subsequent touring. You get the story of Rob falling off his motorcycle when riding it out on stage, of Rob meeting Dio and Dimebag Darrell, of Rob meeting the Queen and of Rob quitting Priest. Now Rob says he didn’t really quit Priest and that it was a big misunderstanding. He asked for time away to do some solo stuff, but he felt they misinterpreted the letter he sent as he was leaving the band. We learn in the book that Rob is not one for confrontation AT ALL! As a result, he was too scared to pick up the phone and explain to the guys he wasn’t quitting. Eventually after 10+ years, it all got worked out and Rob was back where he belonged. But a lot of time was wasted.

I found the book a quite enjoyable read. I learned a lot of about his solo career which I knew almost nothing about and learned he had an industrial metal album produced by Trent Reznor with John 5 on guitar (it was John Lowery at the time). I am a huge John 5 fan, so I looked for that album immediately and played it. It wasn’t that bad, it was very…different. I didn’t even now about the band Fight, I only knew about his Halford stuff so it was fun finding out all this information.

‘Confess’ is what it sounds like. It is Rob confessing everything. He lays his life out on these pages and tells all. He tells all about himself. He doesn’t really gossip about anyone in the band. I don’t feel he really ever talked bad about anyone in the band. Rob seems like too nice of a guy to do that. This is Rob’s story and you get what you expect. For some, it might be hard to read as it is not always a comfortable discussion, but if you can make it through the other side, you will find it is a great story and well worth your time. The Metal God lays it bare and I think we are better for it as now we get to know the man, the myth, the legend of Rob Halford. I have thoroughly enjoyed my time listening to all the Priest albums and now immersing myself in to some band history made this journey even better. I personally loved this book and had trouble putting it down and for that, I will give it a 5.0 out of 5.0 Stars. Just remember it is a Rob tell-all (and he doesn’t hold back)..not a Priest tell-all.

20 thoughts on “‘Confess: The Autobiography’ by Rob Halford”