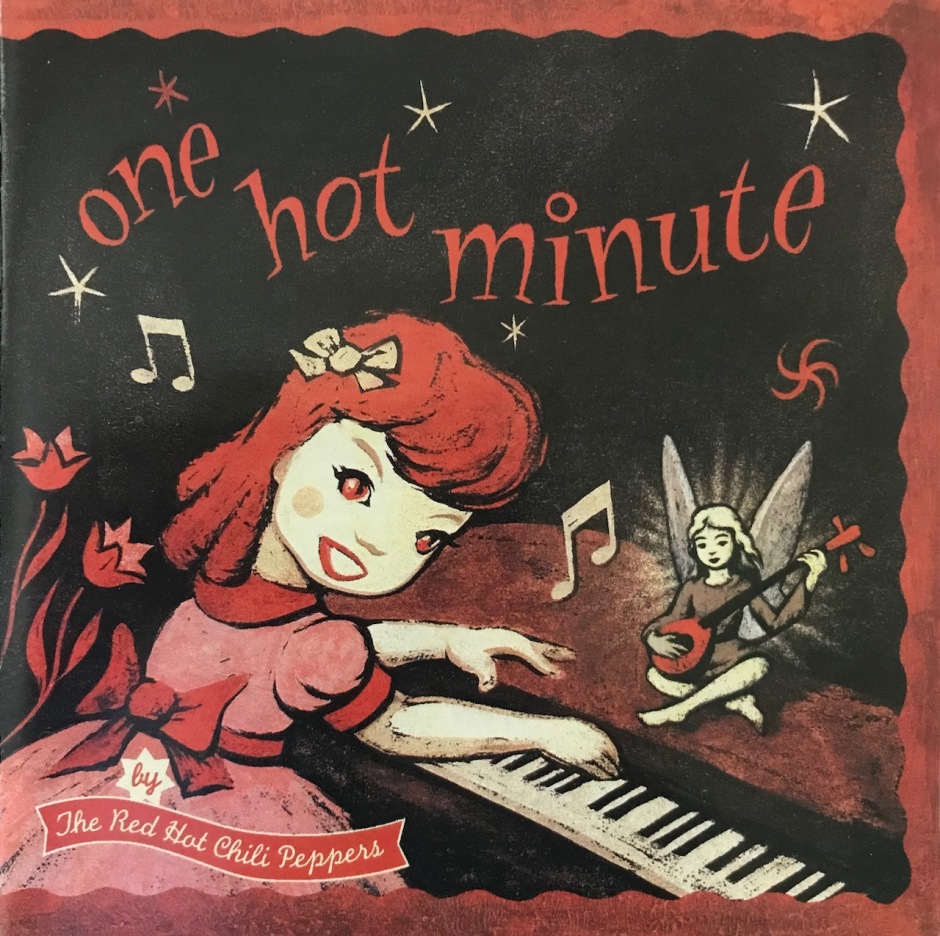 Alright…You Picked It! And this one was really, really close. It was back and forth between Red Hot Chili Peppers and Styx for most of the time and then Bruce made a run at it, but the winner pulled away at the end and was Red Hot Chili Peppers – ‘One Hot Minute’ which is one in my collection. The votes were as follows:

Thanks to all for participating. The August choices will be up on Saturday!

I only have three Red Hot Chili Peppers albums in my collection. One’s a greatest hits and the other two I didn’t actually buy as were given to me when a neighbor was giving away his collection. And the thing is, I like the Chili Peppers so I am not sure why I don’t have more in the collection. I think it was a little from burnout on them, but regardless, I am a fan and so I was excited that this album was chosen because it is an unusual album in the band’s catalog. Unusual in that is the first album with lead guitarist John Frusciante and the only album to feature his replacement Dave Navarro from Jane’s Addiction (and Ink Master).

The album took over two years to make and was released four years after their massive successful album, ‘Blood Sugar Sex Magic’. That album sold over 7 million copies in the US, ‘One Hot Minute’ only sold 2 million in the US so was considered a disappointment. Let me tell you, 99% of the bands out there would kill to sell 2 million records so it is not a disappointment. The also saw the band’s songs get a little darker and the tone of the album would lean more to some metal riffs and a little psychedelic rock sound thanks to Navarro’s playing style. But don’t worry, the funk is there in full force as Flea took more control on this album since Anthony Keddis had slipped back in to some massive drug use which was part of the reason for the delay in the recording of this album. The album finally did drop on September 12, 1995 and for me, it was worth the wait.

The first song up is also the first single, “Warped”. With its soft quiet opening and Anthony’s vocals are heavily distorted to give it that warping sound and then the song explodes in to a rock track. Anthony slow singing style really miles apart from his rapping style. The song is a burst of energy while talking about Anthony’s confliction with his addiction. The song is one of the heaviest on the album and then quietly ends with a softer outro that gives the song a nice book end of sound.

The prior song bleeds quietly into “Aeroplane” which was the third single. The song is heavy on the bass as Flea is thumping away throughout. Anthony is almost singing in more of speak style almost rap, but not quite. The chorus is full of harmonies and a quieter sound than the verses. It is the type of Chili Pepper song you are used to hearing. The song is a little more upbeat than the opener yet still tackles Kiedis’ personal issues. Towards the end you hear a bunch of kids screaming “it’s my aeroplane” while Navarro lays down a sweet solo. Cool song.

“Deep Kick” opens as a spoken word poem by Anthony accompanied by softer, quieter background music before bursting in to a funked up rock song with Chad slamming the guitars, Flea funky bass and Navarro’s riffage. In what I thought was going to be a skippable track turns in to a rock party that I want a be at. The playing on this is immense and sounds like a good time despite its depressing lyrics.

Then we get to a ballad with “My Friends”. The song went to #1 on the Billboard chart for Hot Modern Rock song which was their 3rd number one. It opens with an acoustic guitar and has a real melancholy feel to it, it does have an solo on an electric guitar which plays nicely with the song and doesn’t showboat. It is pleasant song and nice to see the softer side of the band. I can see why it did so well.

The fifth and final single on the album was “Coffee Shop” and it blasts in with some slamming bass and guitar. Anthony goes between singing and that speaking style singing which he does so well, but it is the bass/guitar combo that is infectious and groovy and all funked up. It is a rocking track that will get you moving like if you just had 5 cups of coffee in the last 5 minutes. Flea is really killing it on this album in my opinion.

Speaking of Flea, he takes over vocals on the song “Pea”. It is an acoustic song with Flea just sort fo slow singing, almost speaking the lyrics. It is angry and a lot of cuss words and at times it is a little funny. At a 1:47 in length, thankfully it is over and we can move on to an actual song. Now, if I’m not mistaken, this might the first time we’ve heard Flea on lead vocals. Correct me if I’m wrong.

“One Big Mob” brings back Anthony on vocals doing some of his classic rapping with the boys helping out on the chorus. The song is a big giant party full of Flea’s bass slaps that give that funky sound that the band is known for and a big plus to the song. There is a long break early on that slows thing down a little before it ramps back up in to its heavy, loud style and delivers on all fronts. There are a lot of sounds going on in the song during that break and I’m not sure if they are done by guitar, keyboards or one of the guys making the noises themselves. I think the break is a little too long and could’ve been shortened because when this song rocks out, it is massive and golden.

Next up is “Walkabout” which is a cross between an organized rock song and a jam session filled with funk. The song is slowed down and Anthony is so relaxed in his delivery as he seems to be contemplating life while out on a peaceful walkabout. This song is going to light the world on fire, but there is something about it that is enjoyable, pleasant and one you want to savor especially when Navarro lays down the solo that is another compliment to the lazy style of the song. There is a brilliance to it all for something so simple.

“Tearjerker” is up next and the song pays homage to the loss of their friend Kurt Cobain. The song has an atmospheric tone to it, a sweetness and a longing for an old friend. It is a fitting tribute to Kurt. I love how the lyrics tell about how Anthony first met Kurt and Kurt was sitting there wearing a dress. It is almost a love song of sorts.

“One Hot Minute” opens with some purposefully bad bass playing before it turns up the volume and the full band comes roaring in. The title track has some fine moments but I will be honest, I got a little bored with it despite its heaviness throughout. I think it is because it same sounding and doesn’t explore different sounds or ground that they have already explored before on the album. The rest of the album just does it better. Maybe this song sounds a little messy too and that could be why it doesn’t completely win me over. Plus at over 6 minutes its too long.

The bass opens the song with some massive funk beats as Flea continues to shine. “Falling into Grace” is more of a mid-tempo maybe even slower tempo than what we’ve seen. Flea’s domination of the song is at times a little too much. You have Navarro in the background making noises but no real riffage and he is very underutilized on most of these songs. He finally does get his moment with a solo but it is reserved and doesn’t let loose. I like the chorus and a lot of things about it but again I’m split on it overall as it is another song just missing the mark.

“Shallow Be Thy Game” is an attack on religion and we quickly see where they stand on the issue. It is funked out rock song and Chad is slamming the drums on this one as he has a lot throughout. The guitars on this one are heavier and so cool moments for Dave as well. Anthony is slaying it with the lyrics and delivers a fantastic chorus and this is Chili Peppers I love. Upbeat, funked up rock. Stellar track.

The albums ends with another tribute to a fallen friend and this time it is River Phoenix. “Transcending” starts off with a cool rhythm that was smooth as silk before turning in to a metal song and one of the heaviest on the album. The song does a complete 180o turn in sound. You can say it is unbridled and has not direction and I would say that is what is great about it. The band lets loose and goes nuts which is how you feel sometimes when you lose a friend. It is also a moment where Chad can go ballistic with his drumming and everyone just freaks out. They go out with a bang just like they started the album.

The Track Score is 11 out of 13 Songs or 85%.  Man was this album eclectic.  The band was all over the place with their sound and while some didn’t work, the majority was fantastic.  Flea’s playing was bombastic and I can’t remember the last time the bass was so prominent in an album I’ve listened to and what a treat it was. A highlight for me. The band’s themes were much darker and I felt they’d done some growing up on this album.  The critics and fans didn’t seem to like it at the time, but I find it incredible and one of my favorites of their albums.  It is the eclectic style and not knowing what you are going to get that attracted to me at first and has kept me a fan of it since I first heard it years ago.  Overall, the Score is a 4.5 Out of 5.0 Stars as I think the critics are wrong on this one.

And there you have it. I hope you enjoyed.  On Saturday, get ready to pick the next You Pick It! in the series.  Thanks for voting and checking out the review.