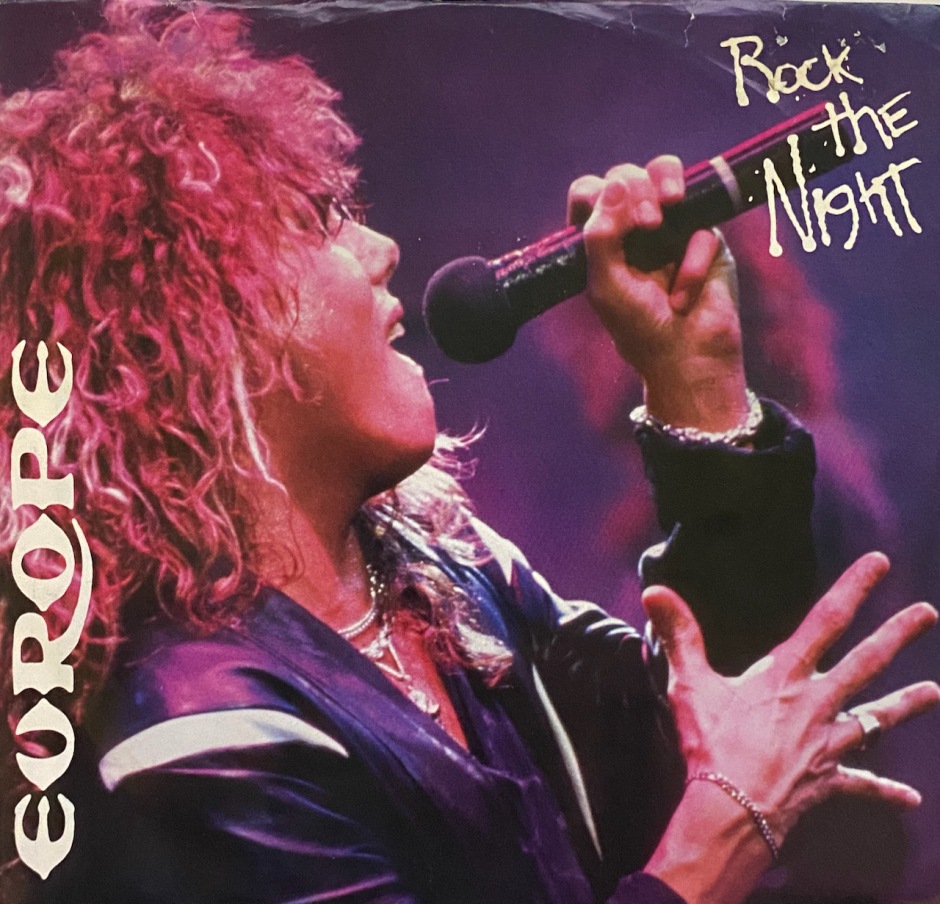 After reviewing the two Winger singles, we are now to a set of four singles all coming from the band Europe. I found these all at Repo Records here in Charlotte and they always seem to have a some great stuff. This time around we have the single “Rock the Night” from the 1986 smash album, ‘The Final Countdown’. “Rock the Night” was originally released in 1985 for a movie soundtrack, but was re-recorded for this album. The single was released in the U.S. in April 1987 and saw it break the Top 40 landing at #30 at its peak. It was the second single off the album.

The song was written by Joey Tempest and is basically talking about how some times you go through some tough times, some pain, but you have to fight and keep going. Take all that energy and just rock the night! Simple enough.

My version of the single is the standard U.S. version, so I thought. But after pealing a price sticker of the vinyl, I noticed there is a stamp saying, “Demonstration-Not For Sale” which leads me to believe this might have been used as a promotional copy. The B-Side is a re-recorded version of the band’s first single called “Seven Doors Hotel”.

The original version of “Rock the Night” was pretty raw and a little heavier. The version re-recorded for ‘The Final Countdown’ is way more polished, slick and melodic. It is a rock track for sure, but it was made for the MTV world with crisp keyboards and shredding guitar solo by John Norum (who left the band after this album was released – heck, his replacement Kee Marcello is in the video mimicking his guitar parts). Joey Tempest had a great falsetto and could hit some killer notes. The song has that big arena rock anthem style and fit in nicely with the scene at the time.

The B-Side was a re-recording of their first single, “Seven Doors Hotel” off their self-titled debut album. The song was one of Joey’s first songs he ever wrote. It was written after watching an Italian horror film called “The Beyond”. Here is a description of the movie which is pretty much the song…In Louisiana’s Seven Doors Hotel in 1927, a lynch mob murders an artist named Schweick, whom they believe to be a warlock. Schweick was in the middle of finishing a grotesque painting, which is seen as evidence of the mob’s belief. Since this counts as a human sacrifice, this opens one of the Seven Doors of Death, allowing the dead to cross into the world of the living. Fifty-four years later, Liza Merrill, a young woman from New York City, inherits the hotel and plans to re-open it. Her renovation work activates the hell portal, and she contends with increasingly strange incidents.

The song is a full on rocker and starts off with a storm brewing, then some ominous sounding keyboards before a drum barrage and Norum shreds a riff and finally Tempest joins in on vocals and horror begins. The up-tempo rocker is a little raw and not as slick as what was to come with the band. The original version of the song was really big in Japan going to #10. I like the fact they gave us a non-album track and a re-recording of an older song at that. Eventually this would get released as a bonus track on a later re-issue, but it took awhile. The video is the only one I found with the single edit time.

And there you have the first of four Europe singles. The next one will be up soon.