Halloween is a fun time to dress up into your alter ego whether it is Tramping out or going full on scary.  The following bands don’t need Halloween to go full on scary because they are that way all the time.  I am going to keep the list rather mainstream because there is some really crazy sh#t out there that actually scares me, but probably too crude and disturbing to actually post.

Here are the some of the Scariest Rock Bands that have crossed our path.

Slipknot:  A heavy metal band out of Iowa, Slipknot is known for the stage shows where the band dresses up in similar clothing but each wearing masks that are very unique and quite scary at times.  The band would do a lot of stage diving, fighting and occasionally would light other band members on fire which made for a crazy concert experience.

Gwar: Gwar takes scary to a new level.  They wear outrageous rather grotesque costumes, that are interesting to say the least.  The real scary part is the outfits would not entirely cover their entire body.  Audiences would be blasted with all sorts of unknown liquids during the shows and mutilations of public figures both political and celebrity figures (only simuated for theatrics).  The show seems to breed violence.  The video below will give you an idea of what to expect.

Rob Zombie:  Rob’s love of horror films is distinctive in his musical stylings.  The music is heavy metal with an industrial sound.  Music Enthusiast magazine stated his music is like Alice Cooper if his songs were written for strip clubs.  I can see that.  His make-up & his bandmates all have a scary, horror theme to them.  With John 5’s screaming guitars, Rob Zombie is a must for any metal fan. 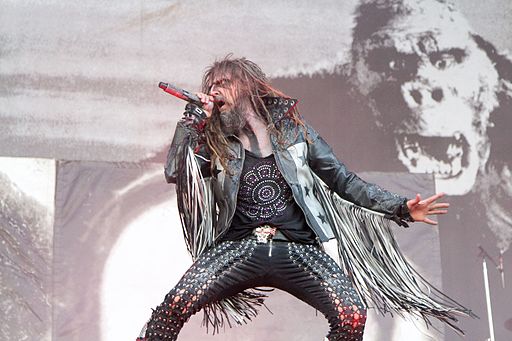 Alice Cooper:  Since I mentioned Alice in Rob’s section, we might as well talk about the King of Scary, Alice Cooper.  His music garnered the label as “shock rock” due to the bands stage antics with snakes and farm animals (okay just one farm animal).  The most famous is the chicken incident where a chicken was thrown up on stage.  Alice thinking the bird could fly, through the bird up in the air and out into the audience.  Chickens can’t fly, so the bird fell like a rock and supposedly, fans began tearing apart the chicken.  If that is not frightening, I don’t know what is.

Kiss:  Maybe all of the band isn’t scary, but the Demon certainly is.  Gene Simmon’s Demon character is one scary dude.  With his evil make-up, the spitting fire and the blood pouring from his mouth, it is enough to give a kid nightmares.  Maybe that is why I love the Demon so much (although Ace was my favorite).  With the make-up on, Gene loses himself and goes all out as his alter ego (oh, and does he have an ego).

Marilyn Manson:  The 90’s saw a new shock rocker with Marilyn Manson.  The bands imagery in their videos was beyond disturbing.  His androgynous appearance also added to the shock value.  The very industrial sound of their music and goth vibe was a new kind of scary for the time. 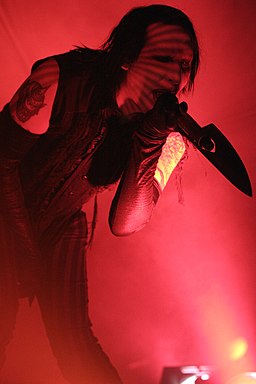 Ozzy Osbourne:  When your nickname is “The Prince of Darkness”, you must be scary.  In the beginning of his solo career, Ozzy was just that…scary.  Christian groups hated him and boycotted his shows and there were several stories of him biting the head off a dove in a meeting and biting the head off a bat during a show.  I guess he was hungry…or maybe drugs!!  The scariest thing he has ever done though was a reality show on MTV…all his scariness disappeared…oh well!

King Diamond:  The lead singer of Mercyful Fate went solo simply as King Diamond.  His use of white make-up has been consistent over the years, but he does change the design work on his face.  His microphone stand is a femur and tibia bone as you can see below.  One other thing, his falsetto is really scary.  How he gets that high is insane. 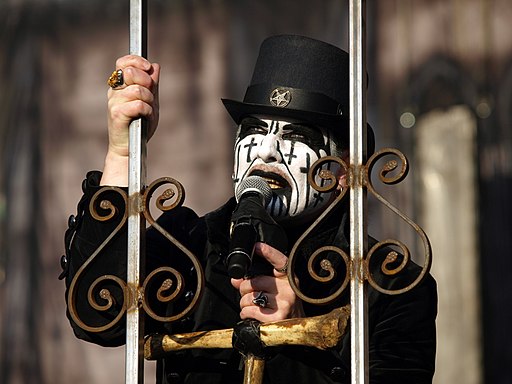 Mushroomhead:  In the same vein as Slipknot, the band wears mask and apparently there was some sort of feud between the bands or at least their fans.  The videos have been banned from TV due to the graphic nature of them and I have to admit the video creeped me out a little.  I am now scared!!!

And finally the scariest thing in music that has ever graced us with their presence: