After a really long week at work, it was so nice to come home yesterday to have these two gems waiting on me. 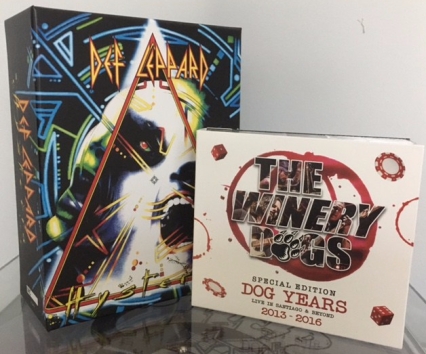 First up, The Winery Dogs: Special Edition Dog Years – Live in Santiago & Beyond 2013-2016.  This 5 Disc special edition includes The Live in Santiago concert on Blue-Ray & DVD as well as a 2 CD set of the show.  Also included is The Dog Years Bonus EP on CD.  Not a bad little set and with coupons and a small gift card I had, this only cost $7 and some change. 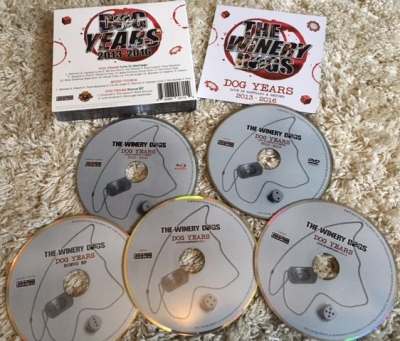 And what I have really been waiting on the, the Def Leppard 30th Anniversary Edition of Hysteria. 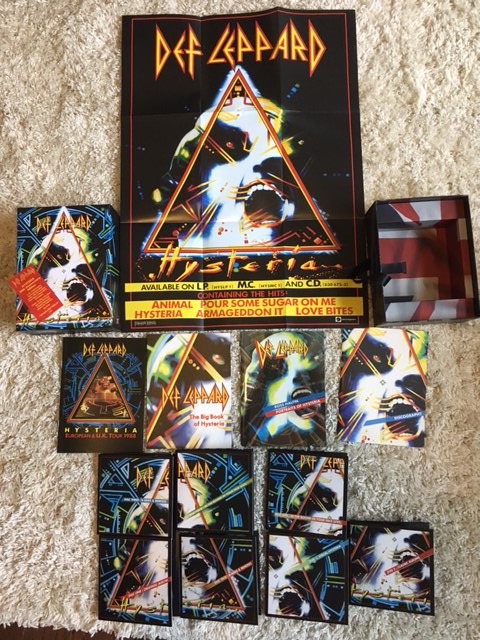 This set includes 5 CDs, 2 DVDs, 4 books and a poster as well as a very nice box to put it all inside.  The CDs are the remasterd Hysteria album, 2 CDs of B-sides and remixes, and a 2 CD set of the In the Round, In Your Face concert.  A 2 DVD set of music videos and documentaries on the album is also inside.  There are 4 books including  a replica of the European/UK Tour book from the Hysteria Tour, The Big Book of Hysteria, a Ross Hoflin Photographic Book and a Discography of all things Hysteria.  Lastly, a Poster of the Album cover.  Not a bad little haul.

This was a little pricey.  When it was first available, it was $120 and then the price dropped on Amazon to $106 and I preordered it.  Before I got it yesterday, the price dropped to $75 and that is all I was charged.  For me, it was worth it, but I think it is missing the book “Animal Instinct” and maybe a disc or two of demos or unreleased material would have been nice and a more complete set.

Four of the cases for the CDs make a nice picture of the album cover when placed together.

If you want to see what are on the CDs and DVDs, check out below…

And lastly, the Box Set had this little message inside…

I think I am in for a very enjoyable weekend.  If you don’t hear from me, now you know why!!!

12 thoughts on “The Mailman – Def Leppard & The Winery Dogs”