It was Sunday, September 3rd and I was getting in a car with two teenage girls and we were going to see Ed Sheeran in concert at the Spectrum Center in Charlotte, NC.  I must be a glutton for punishment.  For the pre-concert experience I was serenaded rather loudly the whole way to the show.  I was able to hear such classics as “Hunt you Down” by Kesha, Taylor Swift’s new song “Ready For It”, and several of my all time favorite songs from High School Musical 2 including “Fabulous” by Sharpay (sadly I know this and yes I am being sarcastic).  At least they did throw in “Bohemian Rhapsody” by Queen.  All this was prep for me being surrounded by thousands of screaming Ed Sheeran fans (two of which started screaming before we even arrived).

We arrived in plenty of time before the show as I do not like to be rushed.  Nothing worse than being stressed out to go do something you enjoy like going to concerts.  We made the way to our seats and they weren’t bad at all.  We had a nice line of sight to the stage. 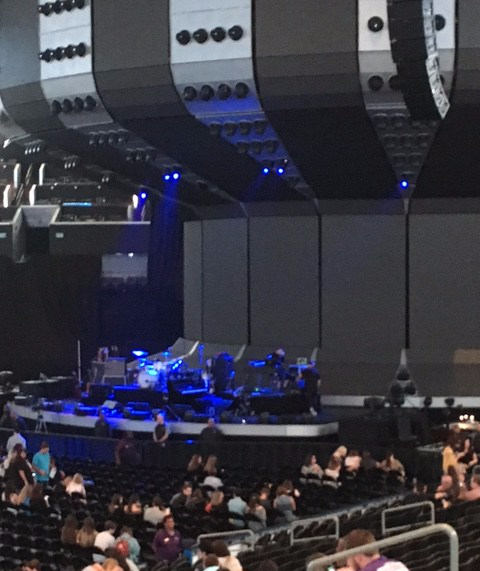 It was a pretty impressive looking stage set up.  The instruments on the stage at the time were for the opening act, the great James Blunt.  James was set to go on at 7:30pm and like all good rock stars he missed that time.  Yes, he didn’t go on until 7:27pm.  Wait, he went on early.  Something must be wrong with the universe.  Musicians are supposed to start late.  I am not sure I understand this whole early thing.  And neither did most fans as the place was still half empty when he went on.

James started off the show with “Time of Our Lives” off his new album ‘Afterlove’.  James doesn’t rock out the place as most of his songs are on the more ballady scale; however, that voice you hear on the album sounds equally as good live.  He can deliver it.  He immediately went into another song from his new album called “Heartbeat”.  After “Heartbeat”, James interacted with the audience and let me say, the man is funny.  His self-deprecating humor was perfect.  He told the audience he knows no one paid to come see him and he gets it.  As a result, he was going to play for the next few hours and only play new songs.  Plus, if he forgot the lyrics it wouldn’t matter as no one knew his songs anyway.  That really got the crowd into it and from them on the show picked up. 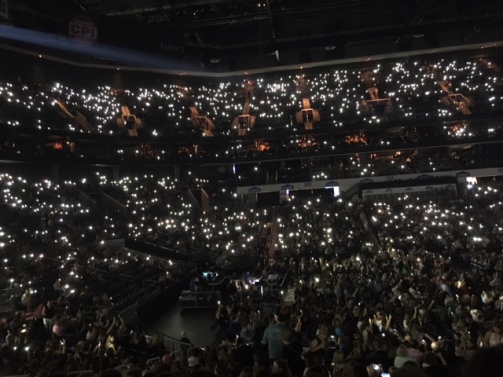 When he started “Make Me Better”, he mentioned he was playing one more song we didn’t know and then he was going to play the ONE song we do know.  And he was true to his word.  James added that some people in the audience were probably conceived to the song “You’re Beautiful”.  That would make them about 11 or 12 I guess.  My daughter is slightly older so that wasn’t true for us.

He played one more from ‘Afterlove’ which was his first single from the album called “Bartender”.  He then finished his set with three more upbeat, danceable songs, “Ok”, “Bonfire Heart” and “1973”.  I have to say that James Blunt’s set was really enjoyable for me. My daughter listened to some of his songs before the show and thought his voice was annoying and I was like what???  He is great.  When the show was over, she stated that he was actually great.  I concur.

The set change over was actually really quick.  All they really had to do was remove James Blunt’s band equipment and add a few things.  All-in-all, I think it took 15-20 minutes.  Unheard of in most concerts I have experienced.  Why so fast?  Ed Sheeran is basically a one-man band. 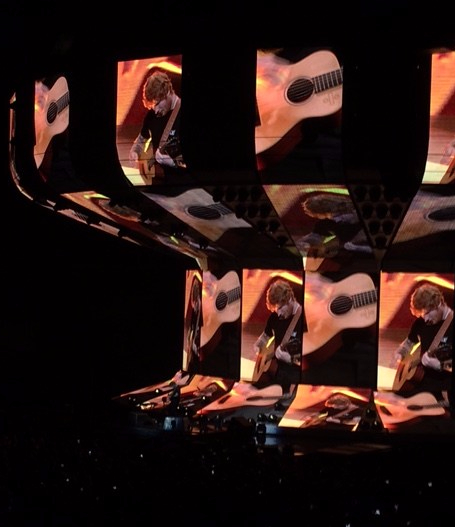 Ed has no backing band.  He does everything himself.  He mostly uses his little acoustic guitar and he uses technology wonderfully in his stage show.  He uses a drum machine for the overall beat and during the song he is recording and then looping several parts and it all feels part of the song.  He is constantly hitting pedals with his foot to start up the loops he just recorded.  It is really an amazing thing to watch and hear.  I like a band and think music should be live, but this felt different and not like he was playing on a pre-recorded track as he was making those tracks as we watched and listened. 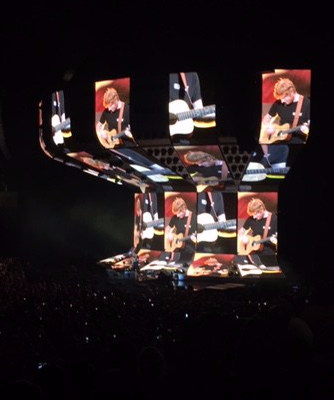 It is hard to believe one man can keep you entertained for an hour and half, but Ed did just that.  His energy level was impressive and his interaction with the crowd between every song kept the crowd fully engaged.  This crowd was definitely there to see Ed Sheeran play and they loved every minute of it.  The nice thing about this Sunday night concert was that Monday was Labor Day and a holiday here in the States so no one had to go to work the next day and they could let it all out. 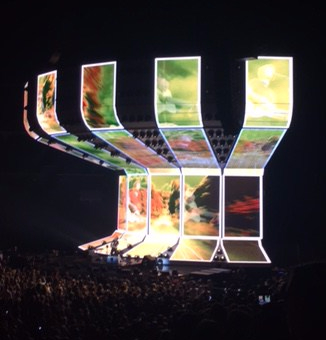 Ed Sheeran played 17 songs during the show.  The track listing as follows:

He played 10 songs from Divide; 5 from Multiply and 2 from Plus.  And amazingly, I knew every single song.  It also helped that I did a review of Ed Sheeran’s Divide when it came out.

There were so many highlights during the show as far as his performances.  I really love it when he breaks out in to rapping on his songs and “Eraser” was really stepped up a notch.  Even better than the album version.  “Bloodstream” was a song I knew and wasn’t overly familiar with it, but I really like that song now.  The stage screens were used very effectively to enhance the song.

The one time Ed wasn’t by himself on stage was for the song “How Would You Feel”.  He brought out one of his road crew members to play piano on the song since Ed said he was better at the piano than he was.  One of my favorite songs he has is “Photograph” which was also stellar live.  Ed’s vocals are spot on during the show and match his album vocals and at times he was even better live.  Nothing better than knowing the performer can actually sing like the albums.  During one of the songs, he asked the audience to turn on the light on their phones similar to what James Blunt did during his performance.  Here is what it looked like for Ed.

The energy level was peaking during “Thinking Out Loud” and “Sing”, but reached a fever pitch during the encore.  The crowd was going nuts when he came back out (wearing a Charlotte Hornet’s jersey) and played “Shape of You” and then my daughter’s favorite Sheeran song “You Need Me, I Don’t Need You”.  I had liked this song before, but he freaking killed it during this song and turned into a whole new beast.  It was an amazing performance.  The screens during the final song were lit up like never before as well. 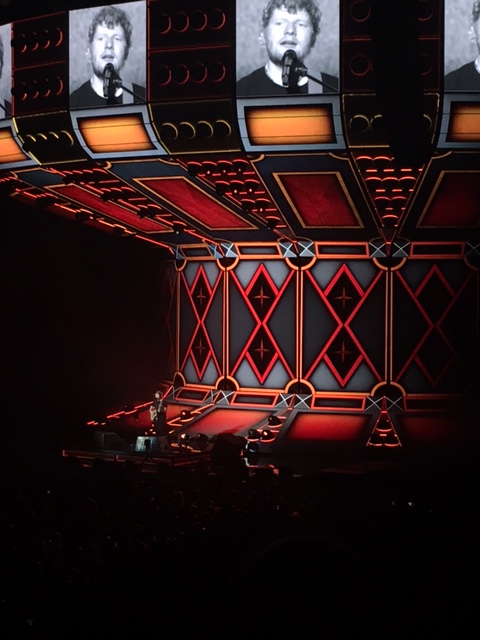 Ed Sheeran put on one helluva show and I think everyone there would agree.  Not one person left until it was over.  Usually you see people sneaking out during the encore to beat traffic, but I don’t think I saw one person walking out.  And I have been to many rock concerts and at times the noise was more intense here.  It wasn’t from the music, but all the screaming girls in the audience.

My daughter said that was her favorite concert ever!!!  She is young and she hasn’t seen Rush, The Eagles, Def Leppard or Kiss so she doesn’t know what she is talking about.  But…it was a really spectacular show and I would rank it pretty high on the list.  It definitely was the best concert I had seen all year (sadly, it was the only concert I have seen all year).  It was fun watching her and her friend go nuts for every song that he played.  They screamed, they photographed and they videoed so much of the show that my daughter ran out of space on her phone and then deleted apps so she could free up space.

Anyway, if you get a chance to catch his show, you won’t be disappointed.  I enjoyed it way more than I thought I would.  He is one of the hardest work guys at there as he is doing it all by himself.

Here are a few more shots from the show.  The pictures are all from my own shots or my daughters and should not be used without the written consent of either of us…plus $1 million (if you want to pay to use them) 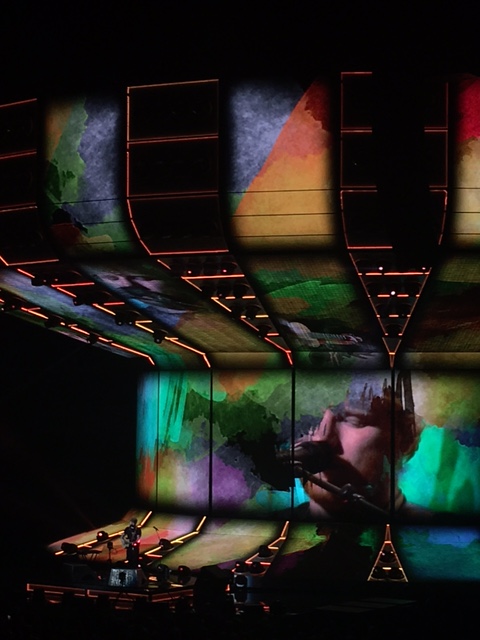