For My Sunday Song #107 is going to take us out into a world that is so strange and bizarre you might never want to return.  We will explore the world of Rob Zombie and his song “Dead City Radio and the New Gods of Supertown”.  The song is off his 2013 album ‘Venomous Rat Regeneration Vendor’.  The song did chart at #15 on the Billboard Mainstream Rock Tracks, but that doesn’t matter for Rob Zombie.

The song is in the normal Rob Zombie industrial style music.  It is hard, heavy and slams a fist into your face.  The main draw for me is his guitar player, the guitar god himself, John 5.  John 5 is a beast of a guitarist.  The sounds and his touch are always perfection and with this one there is at times a whole Sabbath vibe with some of his tone.

The song is about the state of rock radio today.  What was once a flourishing hot bed of good music is dying off in droves.  It changed the way we listened to music, but thanks to the internet and the digital download and streaming, the art of radio is dying off.  I have to agree that radio seems to be a dying form.  The problem with radio is no variety.  They play the same songs and artists over and over and you don’t really discover new music on the radio anymore.  That is what Youtube and streaming is for now.

The music video is pure Zombie art.  It is shot in black & white and as freaky and strange as Zombie himself.  And would you expect anything less?  I think not.  The video stars his wife, Sheri Moon Zombie, and features a break dancing skeleton, a guy in a monkey suit, a large head, and a yeti and I am not sure how to describe it.  I read on wikipedia that it is the first video with John 5 wearing face paint.  You have to watch it and turn up the volume to 11!! 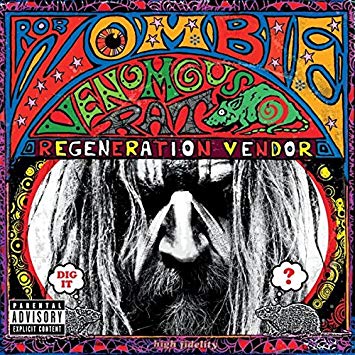 “Dead City Radio And The New Gods Of Supertown”

I want to tell you about Dead City Radio man
and the New Gods of Supertown.
A world of Magic Lanterns and Chemical Blues.
A world where X stands of the unknow and Y is the zero

We listen to the Radio – Dead Radio

I’ll tell you one thing man:
nothing ever happens until you medicate
the Witch Queen of Mongo
and Hail the passing of King George.
Everybody is eating on behalf of the Gods
with their Plastic Necks and Silver Teeth.

Is there life beyond what you know?
Hallucination thrives on my stereo
Astonishing Skeptics
Wasted Youth
She’s and Angel of Odd in her Birthday Suit

It’s right here now that we best serve the Beast of Transmission
and the cool passing wave of ignorance.
They say the heart is a lonely hunter
and the hardbox comes with a crime inside.
OH YEAH!

Leave a Reply to The Vintage Toy Advertiser Cancel reply