For this month’s The Original Vs The Cover, we are comparing the versions of the song “Higher Ground” originally performed by Stevie Wonder and then later covered by the Red Hot Chili Peppers.  Two great artists and two very different versions so which will come out on top.

The song is possibly about two things.  One being second chances and the other is reincarnation (which could also be considered a second chance I guess).  Stevie wrote the song and recorded it in a span of 3 hours which to me is amazing.  According to Stevie, he felt a sense of urgency to get it done as if something was going to happen and he needed to finish it.  Just a few months later, he was in a car accident that put him in a coma for four days (3 days after the album was released).

Okay, let us get to the songs…

Stevie’s song is pure 70’s funk.  It has such an awesome little groove and that unique wah sound comes from a clavinet using a Mu-Tron III pedal.  What are those?  Here is a picture (thanks wikipedia). 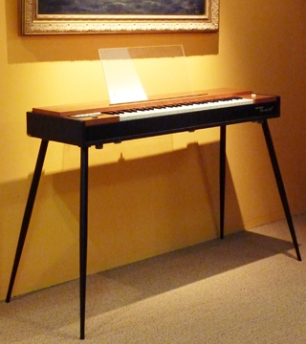 There is also a great bass line which Stevie performed on a Moog Synthesizer and in fact when recording, Stevie didn’t just play the keyboards, he played every instrument on the record.  The man is and was an amazing musician and talent.

Stevie’s vocals are smooth and the pacing is slow and deliberate.  He delivers the song with such heart and soul you can’t help but fall in love with it and that beat is so infectious.  I was just rocking back and forth in my chair listening to it.

It definitely feels 70’s and for that is a little dated, but still outstanding.  There is a slight difference between the single version and the album version.  The album version is about 30 seconds longer and contains and extra verse.

The Red Hot Chili Peppers covered the song in 1989 and the song was off their album ‘Mother’s Milk’.  The song didn’t hit the Billboard Hot 100, but it did reach #11 on the Mainstream Rock Tracks.  So, it wasn’t as a huge of hit for them as it was for Stevie.

The song opens with Flea’s slap bass which is so in your face and immediately lets you know that this is not Stevie’s version of the song.  It makes you completely forget about that clavinet that Stevie played.  If you are a bass player, it might be one of your favorite openings to a song.

That isn’t the only thing different.  The song is sped up and much heavier.  There is still the funk sound as the Chili Peppers are a Funk Rock band.  The song also features a guitar part by John Frusciante that is a different melody than the original plus Chad Smith’s drums are heavier and ends the song with a powerful burst of drums for a few seconds that makes the song go out with a bang.

The band even adds a line to the song acknowledging Stevie with Anthony Kiedis singing  “You know what Stevie says”.  Where Stevie did it all himself, the Chili Peppers had a whole slew of people assisting with the song as there are over 14 people assisting with the background vocals that aren’t in the band. The whole song is an in your face, powerful rock song with a funky twist.

I know I will catch some slack for this, but I really love the Red Hot Chili Peppers version better than Stevie’s.  It is the first version I remember and in 1989 it was so different than the hair band music at the time it had an impact on me.  I also wasn’t a music aficionado back in those days (and probably aren’t one still) and I did not know the Stevie version until much later and didn’t know originally that it was even a cover.

The energy and power that the Chili Peppers brought to the song was so exciting and fun that for me it can’t be denied.  Plus, Flea’s bass work on this is freaking outstanding and the most memorable part for me.  So let the hating begin.  Tell me why you like Stevie’s version better as it does fascinate me on how we all like different things.  I don’t think Stevie’s version is bad, in fact it is amazing.  It is just not the version I like to listen to on a regular basis.

Thanks for stopping by and I hope you enjoyed the trip we took on the song.

I’m so glad that he let me try it again
Cause my last time on earth I lived a whole world of sin
I’m so glad that I know more than I knew then
Gonna keep on tryin’
Till I reach my highest ground…Whew!

14 thoughts on “The Original Vs The Cover – “Higher Ground””