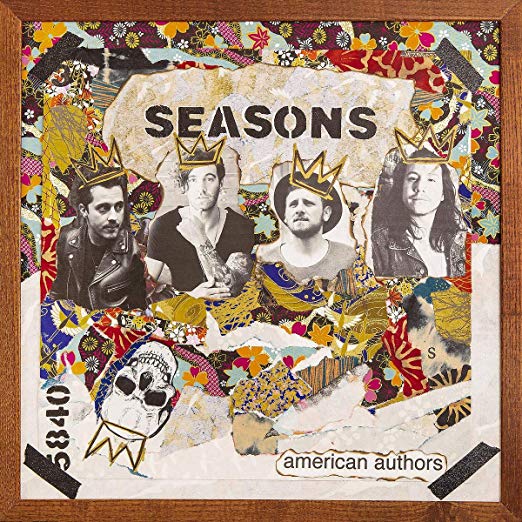 American Authors is one of those bands I had heard about due to their hit “Best Day of My Life” from 2013, but I had never wanted to take a deeper dive.  It is not because they weren’t any good band, it is just not my type of music.  It is too pop and generic and nothing really interested me.  Well, with the release of their third album, ‘Seasons’, that has now changed.

The reason for that change is simple, they have two songs on the album by a couple of my favorite singers right now, Billy Raffoul and Bear Rinehart (Needtobreathe).  You see, those two put out a song…I will listen and American Authors only reap the benefits…or do they…we will have to see.

I don’t know much about the band, so I will get straight into the music.  American Authors are really good at writing, happy type, uplifting songs and the opening track, “Stay Around”, is just that.  It is an uptempo and fun song that sounds exactly like an Imagine Dragon song with that drum beat and the lyrical phrasing.  Good song, but come on if you are going to copy any one why the hell would you copy Imagine Dragons?

The next song is one of the best on the album called “Say Amen”.  It features new singer Billy Raffoul and is probably why I am biased about loving this song.  It is a darker song for American Authors and I like this darker edge to the band.  Bill’s Jeff Buckley style vocals work well with singer Zac Barnett who I think changes his vocals to be a little more in Billy’s style which is great because Billy’s vocals have a lot of texture and character.

“Calm Me Down” is another great track with a great drum beat and some nice synths.  They keep to that darker image and I think I could get in to that rather than too poppy.  It is promising.  Then the next song up takes you back to what they are known for, those happy pop songs. This one is definitely in the same vain as their one big hit.  The song is called “I Wanna Go Out” and it is really a fun song and I think their fans will definitely dig it.

Now to the best song on the album, again I am biased.  This one is “Neighborhood” and features Bear Rinehart, the lead singer of one of my favorite bands, Needtobreathe.  It stays to the darker tone in both lyrics and style.  It appears to be about someone who needs to get away from the place and people that surround him so he can go find himself, but in the end he is always a product of his environment and will be back.  It truly is a fantastic song, unbiased opinion on that one.

Now for you Queen fans, “Can’t Stop Me Now” is one helluva tribute to the band.  It is pure Queen in all its dramatic vocals and flamboyant style.  This is another standout for me as who doesn’t love Queen…seriously, everyone loves Queen.

“Deep Water” was the first single and really sets the picture that album would be a little different and take a more serious turn at times.  It has a little slower tempo and it just grabs at your heart as you listen to the lyrics. It is another of the standouts for me.

Back to the happy is “Bring It On Home”.  It is sappy and uplifting and full of clapping and I believe a mandolin.  It is a little repetitive, but doesn’t detract from it too much.  It might be too happy though after the darker tones on this album, but maybe it is needed.

“Before I Go” might be the one song I never connected with and it isn’t that it is bad, it is a little boring for me musically.  Nothing more to say on it.  And finally we have “A Real Place” where we get a mid-tempo song with a nice beat and Zac’s vocals are quite nice on this one.  It is filled with a chorus of angels singing in the background (not really, but it is filled with background vocals in almost church-like quality).  I don’t know if I would have ended with this one, but is still touching, wonderful song.

For the track listing score, it will get a 8.5 out of 10 Tracks or 85%.  I did deduct for that first song sounding way too much like Imagine Dragons…damn shame.  I have to admit I liked the songs more than I thought I would as I never had any intention of listening to this album without Billy and Bear on it.  But I am glad I did.

Overall album score is going to be a 3.5 out of 5 Stars.  It is a solid, good pop/alternative album and although I like a lot of the songs and a couple that will get played a lot, it is still too poppy at times for me.  Do I think the American Author fans will like?  Absolutely, I think it has them growing and trying new things which is always a good thing for a band.  If you like this style of music, it is worth checking out, especially for the Billy Raffoul song and Bear Rinehart song…did I mention those two guys are really awesome…not sure if I did.