Tesla decided to make a new album after saying the last one was…well the last one.  Thankfully, that is not the case.  Tesla’s new album is called ‘Shock’ and there has been a lot said of this new album and about how much it sounds like Def Leppard since it was produced by Phil Collen, lead guitarist of the band.

And let me tell you, they are 100% RIGHT!!  It really does!!  Mostly, it is from the backing vocals.  On a lot of the songs, the backing vocals have been done in the same way Lep does it.  In fact, all the backing singers sound exactly like Phil. Now, I am not saying sounding like Lep is a bad thing.  It is, however, a little distracting and a little detracting.

From the opening track, “You Won’t Take Me Alive”, “Taste Like”, “I Want Everything” and “Afterlife” it is the classic Lep sound.  They aren’t bad songs at all and they do grow on you with each listen.  It is just strange.  At times I feel like I am listening to a Lep album with a new lead singer.

The album is also very soft at time.  It has several ballads (“We Can Rule The World”, “Love is a Fire” and “Forever Loving You”) and even a breezy little song called “California Love Song”.  At times you could compare this album to Def Leppard’s X (often called the “Love” album for it’s ballad heavy track list). 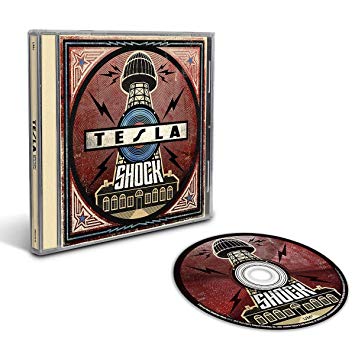 It is really only the rock heavy songs that keep this album from sinking.  The best being the first single, “Shock”, despite its use of electronic drums.  It is really a modern, rock song and when it gets going, it can’t be stopped.  The rawness and raspiness edge to Jeff Keith’s vocals are the star here.

There are couple more great rock songs including “The Mission” which has a little darker edge to it and “Tied to the Tracks” which is more like the old days, less restrained than the rest of the album.  I like the last song, “Comfort Zone” as well with its heavy bass line and a nice little guitar riff (another with Lep backing vocals though).

All-in-all, it is not a bad album.  The problem is it doesn’t feel like Tesla.  The vocals are too clean and the production is too slick.  Tesla for me is more rough around the edges and can really let loose where here it seems to be constrained and boxed in to what the producer wanted.

For all of these reasons, I am giving it 2.75 out 5.00 stars.  I wanted to like it, and the songs do get better with each listen.  However,  I couldn’t get past the sound and being a hardcore Leppard fan, the similarities were ridiculous for me to get past.  If I want Lep, I will listen to Lep.  I wanted Tesla.